Where is the drive that is urgently needed to transition to a zero carbon, environmentally sustainable world going to come from? A European group thinks Community-Led Initiatives can provide a kick-start. Climate change is affecting animals and plants, and the reverse is also true. Stories about worms, forests, snow hares, moose and ticks illustrate this. Humans produce massive amounts of waste which then produces methane, the oft-forgotten but increasingly important greenhouse gas. Finally, a sorry story about the deaths of 38 freshwater swordfish in Western Australia.

A crucial question regarding the transition to an environmentally sustainable society concerns the extent to which change (not just agitation for change but the change itself) can be bottom-up, driven by civil society rather than by government or the private sector. ECOLISE (the European Network for Community-Led Initiatives on Climate Change and Sustainability) has recently produced ‘Reshaping the Future: How local communities are catalysing social, economic and ecological transformation in Europe’. Community-led initiatives ‘… arise whenever people self-organise within their local communities to take constructive action on issues that matter to them [often in ways that] demonstrate the need for radical shifts away from current dominant social, political and economic models’. Projects include community energy, community-supported agriculture, complementary currencies, timebanks and experiments in sustainable living – often with a focus on environmental sustainability, equity and social justice. The report concludes with seven steps to a sustainable Europe including moving beyond continuous economic growth models, emphasising networks of ‘commons’ (self-organising groups, with agreed rights and responsibilities, looking after shared resources) rather than markets, and genuine democracy with involved, empowered citizens.

Earthworms disappeared from most of northern North America during the last ice age. But worms introduced by Europeans are now wriggling north (assisted by automobiles, boats, anglers, gardeners, etc.) into the northern USA’s and Canada’s boreal forests, even to the edge of the permafrost. By disturbing the leaf litter and soil the invaders are affecting the forest’s plant life and also the carbon balance. But different species of worms have different munching and burrowing habits and this makes it difficult to predict whether they will increase the forest’s capacity to absorb carbon or turn the forest into another carbon source. Earthworm: friend or foe in the fight against climate change? Seriously though, this is just one more illustration of how a thoughtless, at first sight inconsequential, human-induced change to the natural environment can have catastrophic consequences for the climate.

On the other side of the same coin, small increases in temperature can have dramatic effects on wildlife. Still in far north America, the average temperature has increased by 2oC over the last 50 years, but by 4oC in winter. The cascading effects of warmer winters are affecting the life cycles and survival of fauna as diverse as snow hares (suffering from ‘climate change-induced camouflage mismatch’) and moose (being made anaemic and vulnerable to predators by large increases in winter tick numbers). Climate change-induced changes to the distribution of a different tick are also causing a global increase (possibly including Australia) in Lyme Disease in humans, with one author calling it ‘The First Epidemic of Climate Change’.

The world’s cities, where most of us now live, generate over 2 billion tonnes of waste per year. I cannot imagine what that looks like but it’s about a third of the coal produced every year globally. Australia, Canada, Germany and the USA are the highest waste producers per head, while African and Asian nations are currently the lowest. It’s unsightly and unhealthy for humans and animals but collection and disposal can be profitable for companies and waste-picking provides income for some people in poorer countries. The popularity of Craig Reucassel’s War on Waste suggests that this is one environmental problem that Australians are keen to tackle. The City of Casey in Melbourne has introduced the first 100% electric rubbish trucks in Australia.

Carbon dioxide is responsible for about 65% of global warming. The second most significant greenhouse gas is methane, responsible for about 20% of warming. But methane levels in the atmosphere are unexpectedly increasing more rapidly than previously, further threatening the achievability of the agreement in Paris in 2015 to limit global warming to 2oC, and even shoot for 1.5oC. Although methane stays in the atmosphere (about 10 years) for a much shorter time than carbon dioxide, its warming effect is 20-30 times stronger, depending on the time frame being considered. (Google ‘Record methane levels pose new threat to Paris climate accord’ to read a Financial Times article on the research that has identified the increased methane concentration in the atmosphere.)

The graphic below demonstrates the multiple major sources and sinks for methane that make it difficult to pinpoint the cause of the increased methane level. Methane is largely produced by the decomposition of animal and plant matter in the absence of oxygen. So the largest sources are natural wetlands, the intestines of cows and other ruminants, and the breakdown of waste in landfill. The production and burning of fossil fuels is also a significant source. As the graphic demonstrates, sources exceed natural sinks by about 10 million tonnes per year. 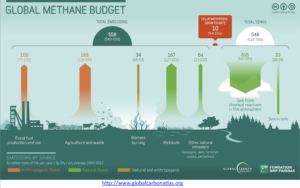 Finally, a distressing story from the ABC about the recent deaths of 38 critically endangered freshwater sawfish in the Fitzroy River in the Kimberley. And pastoralists want to take water out of the river for irrigation!! Are we really that stupid? 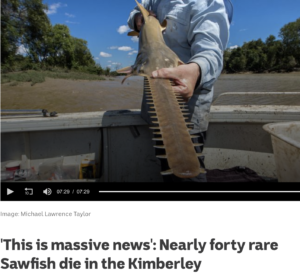