Investments in renewables are increasing but not fast enough. Oil and gas companies continue investing to produce yet more greenhouse gases, including burning coal underground to produce gas in SA. On current trends Australia’s economy is going to take a big hit from climate change, particularly the property and agricultural sectors. Rising sea level is one among multiple threats to Pacific islands. Don’t come back as a tiger in Laos.

Two bits of good news for greenhouse gas emissions: 1) global renewable energy capacity quadrupled in the last 10 years, with US$2.6 trillion invested in its growth, 2) indicative of the shift to renewables, oil and gas companies no longer feature in Standard & Poor’s 10 biggest companies whereas in 1980 there were 7 of them. The bad news: to keep warming under 1.5oC we need to invest at least US$3 trillion per year in renewables until 2050.

But, surprise, surprise, no major oil and gas companies are investing to support the Paris climate agreement. On the contrary, companies such as ExxonMobil, Shell, BP, Total, Chevron and Equinor have approved 18 oil and gas projects worth Aus$73 billion. According to Andrew Grant at Carbon Tracker, ‘Every oil major is betting heavily against a 1.5oC world’.

And there are some crazy development plans around. Leigh Creek Energy (LCK) is proposing Australia’s first underground coal gasification (UCG) project in South Australia. In a nutshell, you find a deep coal seam, sink a couple of pipes into it, drop a match and some oxygen into the coal seam and collect the gas produced as the coal burns (‘syngas’ – quite an appropriate name really). Simple. What could possibly go wrong? LCK’s explanation of how it all works is quite informative. Not surprisingly, Friends of the Earth has a less enthusiastic view of the resulting toxic substances, groundwater contamination and surface subsidence.

If we continue the way we are going, climate change is a major threat to Australia’s financial stability. Between now and 2030 the property market is expected to lose $571 billion in value, with low-lying properties and infrastructure around rivers and coastlines particularly affected. There’s a slow start to the accumulated loss of wealth due to reduced agricultural and labour productivity ($19 billion by 2030) but it shoots up in the second half of the century ($4 trillion by 2100). Queensland is particularly at risk from climate change and the Murray-Darling Basin as a whole could lose half its irrigated areas by 2050, with consequent losses of $7 billion per year. These are just some of the conclusions from ‘Compound Costs: How climate change is damaging Australia’s economy’ from the Climate Council. But, the report says, these costs are not inevitable if we develop a credible national climate policy to rapidly reduce greenhouse gases; prepare people, buildings and infrastructure for future climate hazards; and ensure a planned progressive transition to a clean economy, rather than wait for sudden environmental or economic shock to create chaos.

Low lying Pacific Island are going to drown as the sea rises due to climate change and their populations are going to become climate refugees. Or so goes the popular story. Research is indicating that it’s more complicated than that though. Coral atolls are dynamic structures (hardly surprising) and sea level rise isn’t the same everywhere – it’s higher in the western than eastern Pacific for instance. Plus there are other influences on shoreline erosion and island size such as flooding from storm surges, wave action and movement of tectonic plates. Sea level is but one influence among many, and its relative importance will vary from place to place, and over time: a more rapidly rising sea level in future decades may have more influence that past slower rises. Whether or not people become climate refugees also depends on local social, cultural, political and economic factors and how well authorities and communities have prepared for the expected environmental changes. It is, however, definitely not true to say, as I overheard in a café the other day, ‘I see that research has shown that the Pacific Islands aren’t sinking after all. They’re actually growing’.

Laos has a terrible record of turning a blind eye to the import and export of threatened species and allowing, encouraging even, farms for the breeding and slaughter of, for example, tigers and bears. Apart from the skins, claws, teeth etc., apparently tiger wine is much sought after. The depressing photo below is taken from the 7-minute ‘Sin City’ video, an undercover exposé of the business in Laos. The story concludes with some recommendations. 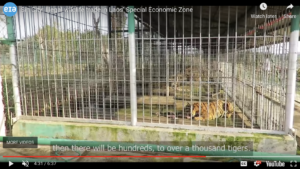