India’s Prime Minister Modi has a vision: OSOWOG – ‘One Sun One World One Grid’, a single, globally connected grid distributing low cost, renewable energy. There are many international electricity connections, including undersea cables, already in existence or planned in Europe and Asia. Modi’s global plans are much grander and include big advantages for India: converting them from a fossil fuel energy importer (costing US$250 billion annually) to a renewable energy exporter; and from a domestic energy system that is expensive, damages health, guzzles water, pollutes the air, and produces lots of CO2 to one that is cheap and getting cheaper, healthy, clean, sustainable and generates income. As the fossil fools repeat endlessly, a problem for renewables is maintaining supply when the sun doesn’t blow and the wind doesn’t shine. But there are several behavioural and technical solutions: renewable sources other than wind and solar (hydro is by far the commonest at present), storage (batteries, hydro and hydrogen); demand response management (shifting and controlling the peaks); and a global grid that takes advantage of the fact that the sun and wind are always available to produce power somewhere (time-shift production). Modi can see the potential of all these technologies to transform India’s energy system and economy. Even Gautam Adani can see the future lies in renewables – if he’s genuine, you can’t help wondering how long it’s going to be before he pulls the plug on the Galilee Basin.

Looking backwards rather than forwards, the Norwegian Petroleum Directorate has produced a scare-piece outlining the catastrophes that would befall Norway in particular but all of us really if we stopped burning oil literally tomorrow: no road freight to deliver all our consumer goods, no more air or sea travel or trade, collapse of commercial farming and fishing, shortage of medicines, no more plastics (which are in just about everything, not just bags and straws), electricity shortages in some places, and so it goes on. But I don’t hear anyone suggesting that we can stop burning oil (or gas or coal) tomorrow. Fossil fuels are deeply embedded in everyday life and the world’s economy at present – it’s stupid to suggest otherwise – but that doesn’t mean a rapid transition away from them is not only necessary but also eminently possible. Not according to Eirik Waerness, chief economist at oil giant Equinor, however, ‘… Norway and Equinor will continue to be involved with oil and gas for many decades to come even if we move towards the climate goals’. If you are feeling very mentally strong today, you might take a glance at the whole booklet that this hyperbole appears in – warning though, it is very dispiriting reading. 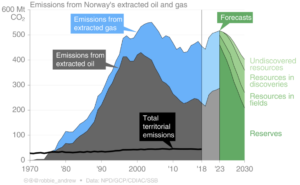 They are absolutely everywhere on earth. Every year more than 1,000 tons of microplastics fall from the sky onto isolated national parks and wilderness areas in the south and central western USA. 98% of the samples taken from 11 parks and wilderness areas contained plastic. There seems to be two modes of deposition. During rain and snow, larger plastic particles from relatively nearby urban centres and farmland falls to the ground. In dry weather, smaller particles from further afield, some travelling globally, are deposited on the land. Most of the particles are derived from synthetic fibres used for making clothes and other products such as carpets and outdoor gear. The problem, of course, is that the plastics don’t degrade; they just keep accumulating. The small size of the particles may also accumulate in lungs and be a health hazard.

Car sales fell by about a third globally during the first four months of 2020. April was the nadir: sales in the USA halved, Germany dropped 60%, France 90% and UK, Italy and India had almost no sales. Sales are expected to pick up quickly as (if) COVID numbers continue to fall. Electric car sales didn’t escape the collapse except in some European countries where electric sales were up 90% compared with the same period last year. Globally, electric car sales have been increasing rapidly since 2010. In 2019 2.6% of total car sales were electric (half the sales were in China) and about 1% of the total car stock is now electric. (This sounds like the kids asking ‘Are we there yet?’ as you reverse out of the driveway.) 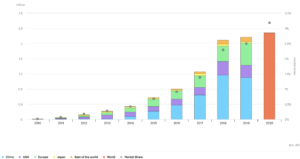 Greenhouse gas emissions also fell as COVID’s star rose, reaching a daily 17% decrease in early April. Road transport and shipping were the hardest hit sectors, accounting for about 40% of the reduction. As was expected though, emissions are rapidly returning to normal as countries return to business as usual and they are now only 5% down. Before the recent outbreak in Beijing, China’s emissions were just about back to pre-COVID levels. 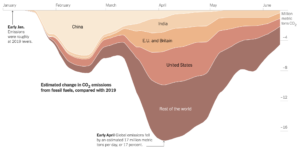