Marine and coastal environments are the focus this week: how ‘The Blue Acceleration’ poses threats to natural environments, economies, lives and homes through ocean warming, melting ice caps, changes in ocean currents, sea level rise and even bushfires. And some early attempts to protect flood-prone areas in the USA.

Global warming causing polar ice caps to melt is hardly news but the speed at which they are disappearing is. Recently released research indicates that Greenland and Antarctica lost ice mass during the 2010s at six-times the rate of the 1990s, with Greenland contributing 60% of the total loss since 1992. This level of loss is at the upper level of that predicted by the IPCC and will add 17cm of sea level rise to the IPCC’s mid-range prediction of 53cm by 2100. Global warming causes polar ice to melt in two ways: warmer air melts the ice from above and warmer seas melt the glaciers that flow into the oceans from below. The sea level rise resulting from the more rapidly melting ice caps will increase the number of people exposed to coastal flooding each year from 360 million to 400 million in 2100. 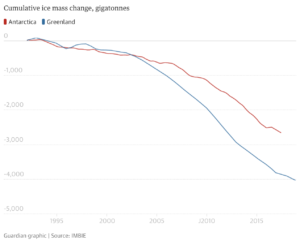 About a third of sea level rise is caused by melting polar ice and about a half comes from expansion of the oceans as they warm. And boy, are they warming! More than 90% of the heat trapped in planet Earth by greenhouse gases is absorbed in the world’s oceans, which have warmed 4.5 times faster in the period 1987-2019 than during 1955-1986. The continuous increase in heat content of the upper 2000m of ocean from 1958-2019, particularly since the mid 1980s, is clearly illustrated in the graph below. Australians are well aware of the coral bleaching caused by higher water temperatures (with another bleaching event currently occurring on the Great Barrier Reef) but many other marine species and environments (including commercial fisheries along continental coastlines) are also adversely affected by warmer seas and the ensuing more intense tropical storms and changing ocean currents. 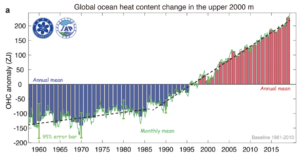 The world’s eight major wind-driven ocean currents (gyres) are moving poleward at about four kilometres every five years as a result of global warming. The currents all rotate anti-clockwise and their western arms move moisture and warmth from the tropics to higher latitudes, causing more extreme heatwaves in subtropical areas, and making sea level rise even worse as they move poleward. The effects of the shifting currents are felt most around 40o north and south where sea level rise is already above the global average. The South Pacific Gyre’s western arm is particularly close to Australia’s highly populated (for Australia) east coast (Newcastle is 33oS and Hobart is 43oS).

The northward shift of the North Atlantic Gyre is particularly bad for sea level rise on the east coast of the USA (Miami is 26oN and New York is 41oN), which may go some way to explaining new measures to get on the front foot regarding properties on flood-prone land. Florida, which is extremely vulnerable to sea level rise and inundation during storms, is likely to approve legislation requiring sea level rise studies to be conducted before publicly funded construction projects in coastal areas can be approved. This would have been inconceivable under the previous state governor who banned references to climate change and global warming in the state’s communications.

In a nation-wide move, following the failure of voluntary acquisition programs the Army Corps of Engineers, a branch of the US Government, is forcing local governments to make a choice: compulsorily purchase reluctant sellers’ flood-prone homes or lose access to federal funds to combat climate change. Local governments have differed in their responses: New Jersey has refused the offer but in Ookaloosa, Florida, and Brookhaven, NY, have agreed to the deal. The relatively good news for councils and residents is that the Corps is proceeding slowly. It is inevitable that at some point Australian jurisdictions will become more active in preventing the construction of or evacuating properties in flood-prone areas and coastal zones vulnerable to erosion.

We are all very conscious of the catastrophic loss of  land-based fauna and flora during and following the summer’s bushfires. A new report has documented some of the impacts of the fires on coastal and marine environments, environments already struggling from development, pollution, over-fishing and global warming. Three problems arising from the bushfires are highlighted. Sludges of nutrients, ash, debris and metals released by the fires are washed down waterways and into coastal areas removing feeding and breeding areas, clogging the gills of fish and causing difficulties for filter feeders such as mussels. Second, harmful heavy metals such as copper, zinc, lead and mercury (and fire retardants) released by the fires can change the physiology and behaviours of marine animals, and work their way up the food chain causing more harm. Third, nutrients from the soil enter the waterways and encourage the growth of algal blooms which kill fish. Not only animals have suffered, seagrass meadows and mangroves have also been harmed. The report’s recommendations include more monitoring and research of coastal and marine environments, immediate recovery and restoration programs, and better long-term protection with stronger environmental protection laws and rapid progress to net zero carbon emissions.

‘Claiming marine resources and space is not new to humanity, but the extent, intensity, and diversity of today’s aspirations are unprecedented. We describe this as the blue acceleration – a race among diverse and often competing interests for ocean food, material, and space’, quoted from the abstract of The Blue Acceleration: The Trajectory of Human Expansion into the Ocean. The figure below summaries many of these claims. Finally, Figure 2 in the linked article demonstrates the dramatic changes that have occurred in marine environments over the last 50 years. 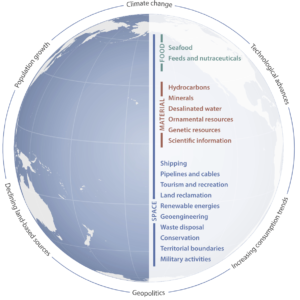