A disturbing report about how climate change exposes women and girls to violence, abuse and exploitation. Calls for a treaty to protect the Arctic from militarisation and commercialisation. Concerns that some people are more concerned about preserving pictures of animals than animals themselves, and increasing covering of climate change in the media.

A study by the International Union for the Conservation of Nature has revealed that climate change and environmental destruction are exposing women and girls to widespread violence, abuse and exploitation. This may take the form of domestic violence, sexual assault, forced prostitution and marriage (including girls), and human trafficking. Areas where the environment is stressed (e.g. from water shortages, lack of natural fuels or extreme weather events) and where there is wildlife poaching or illegal resource extraction are particularly dangerous. Physical and sexual violence are also used to intimidate (and murder) female environmental activists. Unfortunately, many governments and organisations that are funding programs or working in environmentally stressed areas are failing both to recognise the threats to women and children and to protect them.

For as long as humans and human civilisation as we know them have existed there has been Arctic sea-ice. Although it covers only a small proportion of global surface area (around 2%) it affects Earth’s climate and ecology, and human behaviours and political stability. Global warming is progressively reducing not only the area covered by Arctic sea ice but also its volume. Arctic summers could be ice-free in 30 years. Melting of the sea ice is likely to increase global warming even further and has consequences for wildlife, ocean currents and weather patterns globally. Melting also makes it possible for nations around the Arctic to explore and mine the sea bed for oil and gas and militarise the area (goody, goody – more fossil fuels and armaments – just what we need!). Calls are now emerging for a UN-sponsored Marine Arctic Peace Sanctuary (MAPS) Treaty – similar to the Antarctic Treaty established in 1959 – that would protect the Arctic Ocean for scientific and peaceful purposes: no resource extraction, no commercial fishing or shipping, no seismic testing, no military exercises. It will need a highly skilled negotiator to coax Donald and Boris to a deal on this one.

I cannot resist reproducing this quotation from a recent New York Times article on Australia’s bushfires and lack of climate action: ‘Near a bus stop [in Sutherland Shire], I met Bob Gallagher, 71, a retired state employee with thick white hair. He felt strongly that the criticism of Mr. Morrison for not doing enough about climate change was unfair. “The first thing the government needs to do is run the economy,” Mr. Gallagher said. “I just don’t understand what these climate change people want.”‘  How did we get to the point where ordinary folk think that a government’s main role is to manage the economy. Government’s only role is to promote the wellbeing of the people, all the people, by managing public policy (of which one component is the economy). The pictures are worth a look on their own, by the way.

We mourn the extinction of a species. What about the extinction of a drawing of an extinct species? Lucienne Rickard has been drawing and immediately erasing pictures of extinct species at the Tasmanian Museum and Art Gallery for six hours a day, five days a week for the last six months, with six to go. Rickard says ‘On the whole, people are far more horrified that I’m erasing the drawings than they are that the species I’m drawing have gone extinct. One man got angry enough to tell me I was committing sacrilege by erasing art, even though I’d created it in the first place. We’re more sentimental about the things that humans create, about human endeavour, than we are about whole other species.’

There is growing acceptance among the general public of the reality of global warming and climate change, prompted no doubt by increasing awareness of the scientific evidence and greater personal exposure to the effects of a changing climate on daily life. In the USA increased coverage of the effects of climate change in local TV weather reports is contributing to moving the issue from the exotic, distant and fringe to the mainstream here and now, in effect normalising and legitimising discussion of the issues. A major contributor to the increased coverage has been ‘the “seismic shift” in the levels of climate crisis knowledge among local meteorologists’ over the last 5-10 years. In 2011 fewer than 20% of US meteorologists were certain about anthropomorphic climate change but in 2017 this had increased to 80%. Here in Australia, Monash University has been working with the ABC and the Seven Network on a similar initiative.

I imagine that The Guardian newspaper is well known to many P&I readers. It’s also well known for taking a very clear stand in its journalism on the need for urgent climate action, including favouring the terms ‘climate emergency, crisis or breakdown’ rather than ‘climate change’. The Guardian has now taken the additional step of refusing to accept any advertising from fossil fuel companies, that is companies that extract fossil fuels from the ground. I confidently expect The Australian to follow suit rapidly. To be honest, I’m astonished any fossil fuel companies advertised in The Guardian anyway. It seems a bit like paying, if not your executioner, at least one of the principal witnesses for the prosecution.

Oxford Word of the Year for 2019 was ‘climate emergency’. Usage increased 100-fold since 2018. It was also a new verbal construction for ‘emergency’ which is usually associated with family situations or crises within jurisdictions (‘states of emergency’): ‘But with climate emergency, we see something new, an extension of emergency to the global level, transcending these more typical uses’. Other climate related terms made the shortlist, for instance climate action (a tripling of use), climate crisis (25-fold increase), eco-anxiety (43-fold increase) and extinction (doubling use). 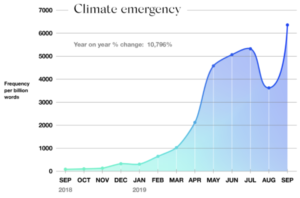