Glaciers, forests and the Great Barrier Reef: today’s round up discusses threats to biodiversity in each of these from global warming or drought or flood or deforestation, or some combination of these. And to finish, a map of Europe that demonstrates the serious and widespread harm caused to humans by coal fired power stations.

The melting of glaciers by warmer air is compounded by the warming simultaneously stimulating the growth of dark coloured algae and microbes on the surface of the ice. Dark surfaces absorb more of the sun’s heat than white ones; result … more melting. Climate change also threatens forests, and not only through fires. Drought and heat make trees more vulnerable to infestation by harmful insects which can cause die-back. The work of researchers on these and other examples of the changing nature of our land and marine environments is highlighted in this article from Inside Climate News. Interestingly, Switzerland is responding to the threat to its hydro power generation as its 1500 glaciers disappear by investigating how to use the valleys left behind as collecting dams for the continued operation of their hydro power stations.

Climate change isn’t the only threat to forests. The Environmental Investigation Agency, a UK-based group whose name describes what they do, often undercover, has just released a report ‘revealing that the multimillion dollar international trade in Burmese teak is riddled with crime and high-level corruption in Myanmar’ and involves a complex web of companies and individuals in several Asian and European countries. Since 1990 Myanmar has lost 20% of its forests to legal and illegal logging and accompanying forest degradation has left just a third of its forests intact. A ten-minute video, containing some grainy but incriminating footage, complements the written report.

And while we’re talking about deforestation and loss of biodiversity (prepare yourself for a shock), climate change is putting our espressos and flat whites at risk. Very few of the world’s 124 coffee species are cultivated but the uncultivated ones may contain the genes needed for continued coffee production as global warming increases. However, climate change and deforestation are threatening the survival of 60% of these wild species. A world without coffee … unimaginable for some.

The Queensland floods are damaging not only people’s homes and essential infrastructure. Muddy and nitrogen- and phosphorous-polluted flood waters have also flowed over the Great Barrier Reef up to 60 km from the coast, threatening corals, sea grass and animal life. Turbid water prevents sunlight penetrating the ocean and chemical run off from farms stimulates the growth of harmful algae. More positively, the colder flood water might cool the water around the reef and head off another coral bleaching event this summer.

Carbon dioxide isn’t the only thing that pollutes our skies when coal is burnt. Particulate matter, oxides of nitrogen and sulphur, and heavy metals – all harmful to human health – also pollute the air we breathe. And the harm is not restricted to areas immediately adjacent to coal fired power stations. The air pollution from sixteen old, inefficient coal power plants in Bosnia & Herzegovina, Macedonia, Montenegro, Kosovo and Serbia causes many cases of respiratory and cardiovascular disease, resulting in 3,900 premature deaths per year. But as the map below (page 9 in this report) demonstrates, the vast majority of these deaths occurs outside the countries housing the power stations. Romania, Italy, Hungary and Bulgaria being the nations suffering the most collateral damage. Page 14 of the report has a nice graphic explaining how air pollution from burning coal affects health. The evidence is clear: there is no safe level of air pollution. Even ‘low’ levels are harmful to human health. 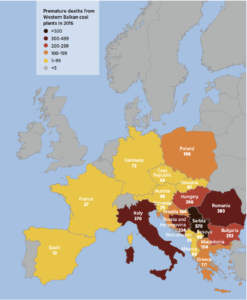