Sunday environmental round up, 24 January 2021

The land this week: strategies to reduce agricultural land and habitat loss, and improve human health, even as the global population increases; the massive carbon footprint of dairy products; problems in Asia – slow-onset impacts of climate change to displace millions and dodgy deforestation practices harm the environment and communities; biochar promises much but many unanswered questions; rains help Australian birds breed up.

One-fifth of terrestrial vertebrates are threatened with extinction, principally as a result of habitat loss driven by agricultural expansion. Yet, to cope with global population growth and the transition of developing nations to more ‘western’ diets, it has been predicted that a further 2-10 million km2 of agricultural land will be required by 2050. By examining 1.5 X 1.5 km pockets of all the world’s land, a new study (behind a paywall unfortunately) has projected how a ‘business as usual’ (BAU) expansion of agricultural land would affect almost 20,000 species of mammals, amphibians and birds. The investigators compared these results with those projected if four agricultural and dietary changes were implemented – improving crop yields globally to best practice, healthier diets, halving food loss and waste, and better land-use planning.

Under the BAU scenario,  by 2050 global cropland would increase by 3.35 million km2 (26%) and 88% of species would lose some habitat, with 1280 species (6.5%) losing at least 25% of habitat and 347 species (1.7%) losing at least 50%. The regions likely to lose the most natural habitat are sub-Saharan Africa, South and Central America and South and Southeast Asia. Implementing the four changes would see global agricultural land decrease by an almost identical amount and habitat losses reduced to 1% in all regions, with only 33 species losing at least 25% of habitat. And humans would be eating a healthier diet! The regions to benefit most were, not surprisingly, those predicted to lose most under BAU. Improving crop yields reduced land use the most, followed by healthier diets and then reducing food waste. In addition to emphasising the immediate policy relevance of the changes they examined, the authors stressed two points. First, the total threat to biodiversity under BAU is even worse as their modelling did not include several very important related causes: climate change, habitat fragmentation, over-exploitation of land and pollution. Second, actions require locally appropriate policy changes, including where necessary conventional conservation measures to tackle remaining threats to habitats.

Next, a couple of depressing stories about deforestation, habitat loss, destruction of communities and child labour in southeast Asia. First, a short video describing the determined efforts of a 14 year old in the USA to stop the Girl Scout association raising funds by selling cookies made using palm oil produced on plantations in Indonesia and Malaysia that use child labour. (There’s also a longish article here.)

Second, a BBC report about the questionable land acquisition and deforestation practices of the Indonesian government and a South Korean palm oil company in West Papua. An investigation by the, allegedly environmentally-minded, Forest Stewardship Council (FSC), of which the company is a member, found that the company destroyed 30,000 hectares of high conservation forest in breach of FSC regulations and violated traditional and human rights.

Despite this, the FSC board rejected a recommendation to expel the company because they felt it was better to encourage the company to make improvements. What confidence can consumers have in the FSC’s certification system and logo on products if they continue to certify companies and products that they are well aware do not meet their standards? This simply deceives trusting people who are keen to do the right thing who purchase the products bearing the FSC logo. We need such certification systems but if they have been captured by the industry, they are worse than useless.

Television stations love showing us graphic images of people being forced to migrate because of extreme weather events such as cyclones and floods, the frequency and severity of which are increasing as the earth warms. Much less media attention is devoted to the migration that is linked to sea-level rise, water stress, reduced crop yields, drought and the consequences for communities of loss of biodiversity – the ‘slow-onset’ impacts of climate change. These impacts are particularly important for five South Asian countries – Bangladesh, India, Nepal, Pakistan and Sri Lanka – which, despite containing about a quarter of the world’s population, have contributed less than 5% of cumulative global emissions.

It’s estimated that if the nations of the world implement their current pledges to limit global warming (which at best will limit warming to around 3-4oC), approximately 37 million people in South Asia will be displaced by 2030 by slow-onset impacts. By 2050, this will rise to approximately 63 million people. Even if we get on track to limit global warming to the Paris target of under 2oC the numbers forced to migrate by slow-onset impacts will be approximately 23 million in 2030 and 34 million in 2050. In all cases, about 75% of the migrants will be in India. Needless to say, the people most vulnerable to forced migration are those with least resources: low income, asset-poor, small scale farmers and fishers, children and women, people with disabilities, people in detention and older people. These countries can also expect the slow-onset impacts to reduce their GDP by about 2% in 2050. I’m sure that P&I readers have a pretty good idea of what is recommended to reduce the looming human catastrophe:

Like me, you’ve probably heard about biochar. You’re possibly also aware that it’s a charcoal-like substance produced by burning organic material (e.g. crop waste) in a low oxygen environment and that its advocates extol its potential to simultaneously absorb CO2 from the atmosphere and improve soil quality when it is applied to farmland. But, if like me you are neither a farmer nor a chemist, that’s possibly the extent of your knowledge. Turns out that a meta-analysis of published studies has confirmed these benefits and suggested that biochar’s porous nature also makes it capable of absorbing large quantities of water which can reduce run-off when it rains and reduce the need for irrigation.

Sounds like a winner all round … except that there are inevitably some disadvantages and unanswered questions. Such as which sources of biochar (e.g. grass, wood, straw or shells) are most beneficial for which crops (cereals seem to benefit but potato yields decline) in which types of soils (sandy seem to benefit the most) under which types of irrigation and management systems? One size clearly won’t fit all when it comes to putting biochar on your fields. The main disadvantage at present though (apart from the uncertainty) is that because it’s a niche practice, there isn’t much demand for it and so there are no economies of scale in its production. Hence it’s expensive.

Evidence about the health benefits (or otherwise) of milk seems to be forever changing, as do recommendations about its consumption. Personally, I am a committed consumer of full strength milk, cream, yoghurt and almost all types of cheese. But I am also aware of the environmental problems associated with dairy products. There’s been a lot of consolidation in the dairy industry in recent decades and thirteen large global dairy companies now have the same annual greenhouse gas emissions as the UK (about 350 million tonnes per year) and, unlike the UK’s emissions, the dairy companies’ emissions are increasing. Not surprisingly, cows themselves produce more than 90% of the industry’s emissions.

Most plans for limiting global warming recognise the need to reduce agricultural emissions and dairy farming has to be part of this. However, the industry responded rather defensively to this data: ‘It’s very easy to put out a report that criticises and tries to paint a simple picture of a sector which doesn’t contain all of the nuances or realities of how the global dairy sector nourishes the world with nutrient-rich, safe foods and does so in a manner that strives for continued environmental improvements while providing livelihoods to a large percentage of the world’s population’. This is a direct play from the fossil fuel industry handbook, stressing the nutritional and economic benefits of the industry but failing to recognise the absolute necessity of reducing emissions. The laws of physics don’t negotiate.

They survived the drought and then the bushfires and so when the rains came in February 2020 they grabbed their chance and made whoopee. Many inland bird species were breeding up in the middle of the year, particularly budgies. Coastal birdwatchers might get a chance to benefit when the inland starts to dry again and the birds move towards the coast in search of food and water. 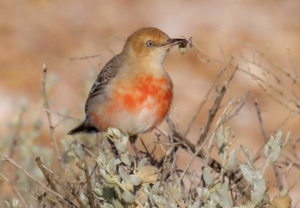 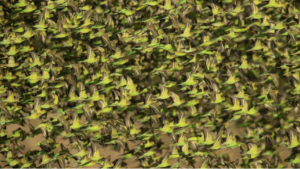