PETER SAINSBURY. Sunday environmental round up, 24 May 2020

A guide to the Australian government’s plans for the post-COVID recovery and bureaucrats and scientists talk with feeling about Australia’s Climate Wars. Cyclone Amphan hits India and Bangladesh, providing a current example of the increasing frequency of strong tropical storms. Worldwide, animals big and small are going extinct, and Australia is working hard to fuel the trend.

Not too sure what the King Report on ‘additional sources of low cost abatement’ says? Or what Australia’s National Hydrogen Strategy, prepared by the Chief Scientist, is all about? Don’t know what ‘technology neutral’ and ‘gas led recovery’ mean? Confused by Carbon Capture and Storage (CCS) and the government’s Climate Solutions Fund? Unclear why large global investors are dumping their coal shares?  Tim Buckley has provided a succinct overview and commentary of the challenges facing Australia as we grapple with moving beyond COVID, preparing for the next bushfire season and reducing our greenhouse gas emissions. As Buckley says, ‘it’s not just a restart that we’re after – it’s a new start’. Riffing off those little ‘staff notes’ you see in hipper bookstores:  A Highly recommended Read.

Interestingly, and ignoring the trend to divest from fossil fuels, Saudi Arabia seems to be doubling down on its long term budgetary problem caused by a dependence on oil revenues by buying into Alberta’s tar and oil sands. Perhaps it’s seeking to knobble the competition from within.

Also highly recommended is last Monday’s Four Corners that examined Australia’s political ‘Climate Wars’ over the last 15 years. The politicians (Rudd, Combet, Wong, Brown, Turnbull, Minchin, Taylor) recycled the usual tropes but real insights came from the former senior bureaucrats (Henry, Parkinson, Shergold) and chief scientists (Sackett, Chubb). They were truly discomforted by what they observed and participated in. At times, poor Ken Henry looked so distressed you wouldn’t have been surprised if he’s started to weep. It’s well worth watching but (**Spoiler Alert**) don’t expect a happy ending.

With Cyclone Amphan bearing down on eastern India and Bangladesh this week, it’s timely to consider the relationship between climate change and tropical storms. Theory says that global warming and warmer oceans will cause the air to take up more water vapour, increase the energy in the atmosphere and make tropical storms (cyclones, hurricanes, typhoons) more intense. However, it’s been difficult to demonstrate this effect in practice. Satellite data covering the whole globe from 1979-2017 has now confirmed the theory. During that period the strongest tropical cyclones (wind speeds over 185kph; category 3 and above) became 15% more common, with the North Atlantic experiencing the largest (49%) increase. Climate change increases the damage done to people and structures by cyclones such as Amphan by increasing wind speeds, increasing the rainfall during the event, raising sea levels and exposing more land to storm surges, and causing storms to strengthen more quickly which makes predicting their behaviour more difficult.

Big and small, land and marine, fins, feathers and fur – no sort of animal is exempt from the threat of extinction. Currently threatened animals, some critically, include giraffes, rhinos, frogs, tigers, gorillas, orangutans, vultures, turtles, wolves, vaquitas, leopards, cheetahs, lions, pangolins – all going silently extinct. The causes are well known: the loss and fragmentation of habitat, and for predators the consequent loss of prey; poaching and hunting by humans; destruction by invasive species; pollution and climate change. The New Big 5 project is an international initiative to create the Big 5 of photography: shooting with a camera, not a gun. Its broader goal is to make a difference before it’s too late to save wildlife generally, unsung little-known creatures as well as the iconic big mammals.

Australia has a terrible record of extinctions and it looks set to get worse. A paper published in 2018 identified the 20 mammals and 20 birds at greatest risk of extinction in Australia over the next 20 years. The authors estimated that ‘another seven Australian mammals and 10 Australian birds will be extinct by 2038 unless management improves’. The mammals most at risk tend to be concentrated in Australia’s far north and south-western corner, while the most at risk birds are concentrated in the west coast of Tasmania, Victoria and within 500 kilometres of the NSW coast.

It’s terrible but sort of understandable how the thylacine went extinct. The 19th and early 20th centuries were a different era: different mores, different attitudes towards the environment, and perhaps they could say ‘we didn’t know what we were doing’. But there can be no excuse for letting Greater Gliders drift into oblivion in the 21st century. About 40cm long, with a 40cm tail, Greater Gliders nest in hollows in old trees. They feed on eucalypt leaves and, remarkably, can glide up to 100 metres. Until recently, Greater Gliders were plentiful along Australia’s east coast but during just the last twenty years population numbers have crashed by a staggering 80%, despite Federal and state laws recognising that the species is facing extinction. The longer-term causes, of course, are land clearing and logging but the recent bushfires destroyed large swathes of their remaining habitat, about 1/4 to 1/2 in Victoria. And yet logging of their habitat in old growth forests continues – to produce such valuable products as paper and pallets.

Australian politicians quite possibly get the idea of biodiversity loss. What they seem to fail to realise is that every time they approve the logging of another area of native forest, or the extension of an open cut coal mine, or draining a wetland, or the extraction of more river flow or groundwater for agriculture or mining, they are contributing to that biodiversity loss. Every such decision they make, no matter how small, contributes to the global crisis. 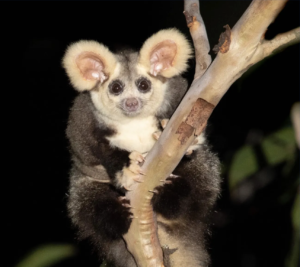 With thanks to Environmental Justice Australia for the information about Greater Gliders and Josh Bowell for permission to reproduce his stunning photograph.