A very strong international flavour this week. Land degradation problems and encouragement to shift to renewables in India; Bangladesh planning to massively increase its coal-fired power generation; California fighting back against Trump and car makers on fuel efficiency standards; Germany legislating to achieve its Paris agreement targets; and large increases in nitrous oxide emissions globally. Closer to home, encouragement to give the young people your support this coming Friday.

Land degradation is the loss of biodiversity and productivity caused by physical, chemical and biological degradation of the land arising from deforestation, land clearing, over-farming and overuse of fertilizers. It damages community, national and global economies and contributes to climate change by reducing carbon sinks in the soil and vegetation. Land degradation predominantly affects developing countries. Desertification, a consequence of soil erosion and loss of natural vegetation associated with severe land degradation, creates arid and semi-arid areas. Without proper management, land degradation and desertification could create 700 million climate refugees by 2050. India is particularly badly affected. Degradation, particularly arising from climate change, affects 30% of all Indian land and is a serious threat to food security, personal livelihoods (44% of the workforce is in agriculture) and economic growth. The solution in India, as elsewhere, lies in minimising further land degradation and restoring degraded land. This brief from Future Directions International provides a very informative introduction to the issues.

Staying in India, the good news is that 90% of residents now have access to electricity; the bad news is that air pollution from burning fossil fuels causes up to half a million premature deaths a year. The International Monetary Fund is now calling on India to take advantage of the falling cost of renewables to create a modern, low carbon, fair energy sector that eliminates coal-generated air pollution and reduces related deaths by 40% by 2030. The IMF recommends increasing the tax (cess) on coal from the current Rs 400 to Rs 5,000 per ton by 2030 and using some of the revenue to boost the income of poorer households and improve health and education services. The need for support for displaced workers and affected communities is also recognised. Recognising India’s growing status in the global economy and its current third place status as a carbon emitter, the IMF feels that action by India to transform its energy system could catalyse action globally.

Moving east, Bangladesh is a rapidly growing economy with plans to become a developed country by 2041. Like India, 90% of the population currently has access to electricity. The downside of their legitimate aspirations is Bangladesh’s intention to increase their coal-fired power capacity from its current 525 MW (just 3% of the total) to at least 33,200 MW (32%), completely inconsistent with the Paris agreement’s goals. The power stations will be fuelled by imported coal costing US$2 billion annually and would lock in plants, coal imports, carbon emissions and air pollution for decades. This dirty expansion is being supported financially and technologically by countries that like to parade their green credentials: China, the UK, Singapore and Japan. One can only hope that Bangladesh, vulnerable as it is to sea level rise and land degradation, rethinks and places more emphasis on renewable energy, particularly as there is so little current investment in coal.

It is undeniably true that no country is making sufficient effort to control its domestic (or exported) greenhouse gas emissions and so limit global warming to a relatively safe level. It is equally true that many countries’ actions and achievements are not matching up to their rhetoric and promises. But, that said … some countries and jurisdictions within them are making more effort in both rhetoric and action than others (compared with Australia, most are doing more). Two examples. Several car makers, including General Motors, Toyota and Fiat, sided with President Trump when he tried to prevent California implementing higher fuel efficiency standards on vehicles. California’s governor Newsom has responded by halting purchases of vehicles by state authorities from the Trump affiliates. Beneficiaries of the ban will be the car makers who publicly supported the higher standards: Ford, Honda, BMW and Volkswagen. All sedans purchased by the state will also now be electric or hybrid.

Second, Germany has legislated to meet its Paris agreement commitment to reduce its carbon dioxide emissions by 55% of the 1990 level by 2030. To achieve the goal, Germany has allocated US$60 billion for incentives for green energy, the purchase of electric cars, replacing oil-burning furnaces and insulating private properties. The law also requires ministries to achieve specific emissions reductions in their sector, introduces a carbon pricing scheme that will increase from US$11 a ton of carbon dioxide to US$39 by 2025, and imposes a tax on plane tickets while providing tax breaks for train tickets. Learning from Macron’s problems in France, the package includes increased benefits for commuters.

The next round of student climate protests will be held next Friday, November 29th. If you are able to support the young people on the streets, please do so. The health of current and future kids is seriously threatened by climate change.

Carbon dioxide and methane are the major greenhouse gases but there are others. Next in the list of importance is nitrous oxide (N2O or laughing gas) and as the graph below vividly demonstrates its level in the atmosphere has been skyrocketing over the last century. The main cause of the increase is the phenomenal increase in the use of nitrogen fertilizers – interestingly use of nitrogen fertilizers and N2O emissions have not increased in the USA and Europe in the last twenty years. The major problems are in China and Brazil. 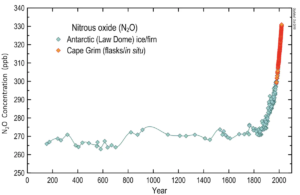