Ocean scientists express the need for urgent action in eight policy areas to restore the health of the world’s oceans, while an article in the BMJ highlights the links between ocean health and human health. Australia’s current review of air quality standards is timely in light of a report identifying four locations in Australia that rank highly among the world’s sulphur dioxide level hotspots. And heat: January was Australia’s hottest month on record and July was the world’s hottest month on record.

In preparation for the UN Decade of Ocean Science for Sustainable Development (2021-2030), fifteen researchers from eight countries have published an evidence-based but heartfelt case for urgent action to restore ocean health. The ocean occupies more than 97% of living space on Earth and is the dominant influence on keeping it habitable. But human activity is causing it to heat up, become more acidic and lose oxygen. In addition, fish stocks are declining through overfishing (a staggering 93% of global fisheries are fully or overexploited) and we are polluting the oceans with plastics and numerous chemicals. To top it off, the changes occurring in the ocean’s physical and biological systems are happening a lot quicker than was predicted a few years ago and some may soon reach irreversible tipping points. Despite these threats, existing regulatory bodies are failing to respond adequately. The experts recommend eight actions, all of which are desperately needed in the next ten years: (1) tackle climate change, the scientists’ most important issue, and limit global warming to 1.5oC; (2) establish a robust international High Seas Treaty to protect areas beyond national jurisdictions; (3) enforce regulations in existing Marine Protected Areas and extend them to cover at least 30% of the ocean; (4) adopt a precautionary approach to deep-sea mining; (5) end overfishing and illegal fishing; (6) radically reduce marine pollution with nitrogen, phosphorous, chemicals and plastics; (7) establish a financing mechanism for ocean management; and (8) scale up data gathering and science to improve decision making. Although the article appears in a scientific journal, it is an easy read.

As is an editorial in the British Medical Journal emphasising the connections between oceans and human health. Highlighting pollution entering the food chain (e.g. untreated sewage, mercury, toxins from algal blooms, endocrine disrupters, antibiotics, PCBs), overexploitation (e.g. collapse of fisheries) and climate change (e.g. storms, tidal surges, loss of biodiversity in coral reefs), the editorial notes the threats to the health of millions of people all over the world right now: ‘We cannot continue to discharge vast amounts of waste materials into our seas and expect human health and wellbeing to be unaffected’. More research to better understand the link between ocean health and human health and better international governance of the oceans are prominent again. There’s also a 20 minute talk with one of the authors.

January 2019 was Australia’s hottest month on record, with the country’s mean temperature exceeding 30oC. Port Augusta hit 49oC, Menindee 47oC; Cloncurry had 43 consecutive days over 40oC, Alice Springs 16 in a row over 42oC; Wanaaring (NSW) never dropped below 36.6oC one night. As summer temperatures increase even further, Australian towns and cities are going to need to find ways of living differently. Phoenix, Arizona, is one of the USA’s hottest and fastest-warming cities and the daily rhythms of life, work and recreation are already changing. Routine activities such as physical activity, household chores, commuting, gardening and children’s play are shifting from the morning and afternoon to dawn and dusk. Business hours are changing and some construction activities are now occurring in the middle of the night, not only for worker comfort and safety but also because the construction materials require lower temperatures. Research is finding ways of identifying and helping vulnerable populations (for example caravan dwellers) and building the urban environment to lower ambient temperatures. Mayors of our own hottest urban areas might like to take a trip to Phoenix for some ideas.

Sulphur dioxide (SO2) is an extremely irritant gas that is very harmful to people’s health, affecting the respiratory and cardiovascular systems and contributing to premature death. It is produced by burning coal and oil in power stations and industrial facilities, especially smelters. Although the amount of SO2 that can be emitted by such entities is controlled by state and territory legislation, Australia’s standards are nowhere near world’s best practice or what is best for people’s health. A report using satellite data from NASA has shown that the Latrobe and Hunter valleys, Lake Macquarie and Mt Isa feature among the world’s SO2 hotspots and that Australia’s total emissions place it 12th globally – you can see details of our hotspots on the report’s interactive map of polluting regions. The good news is that Australia’s states and territories are currently reviewing the national air quality standards for SO2 (and other harmful pollutants) and they have received over 17,000 public submissions. No doubt a few will be from rent-seeking companies proclaiming the usual self-serving tripe that everything is hunky dory and any reduction in permitted levels of pollution will destroy their business and Australia’s economy. However, I bet 99% are from concerned professional groups and citizens. The more public participation the better if we want governments to lift their game as well as the polluters’.

Worldwide, July 2019 was the hottest July and the hottest month ever on record. The map below displays lots of climate anomalies for the month (larger version here). If you’d like more information you have the choice between a data-laden but readable summary or the full Global Climate Report for July 2019 from the National Oceanic and Atmospheric Administration. Note that the temperatures are all in Fahrenheit (if you’ve forgotten your school physics 1oC = 1.8oF). 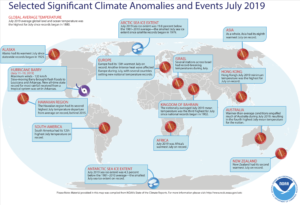