Ecosystems are likely to collapse sooner and more abruptly than previously thought, which is not surprising considering Trump continues to destroy the environmental in the USA. We can do better: the post-COVID recovery can be used to promote environmental sustainability and we have the technology to halve greenhouse gas emissions every decade. You can do your bit – make a submission to the review of the EPBC Act in the next 5 days.

P&I readers know that climate change, and other forms of environmental degradation, are reducing biodiversity, and that species extinction rates are far higher than has been experienced in earlier geological times. You also know that the damaged, less resilient ecosystems are less able to provide the environmental ‘services’ upon which humans rely for clean water and air and healthy nutritious food. The assumption that the biodiversity losses will occur gradually has, however, been challenged. Past and predicted annual temperature and precipitation patterns from 1850-2100 were used to examine the exposure of over 30,000 land and marine species of animals and plants to dangerous climate conditions.

In ecosystems where some species are living close to their climatic or other environmental limits the loss of one of two key species can create a domino effect that results in the rapid collapse of the whole ecosystem; coral reefs and forests are particularly at risk. The research also shows that multiple species in multiple ecosystems may be affected almost simultaneously and abruptly, and that nowhere on earth will be spared. At current rates of warming tropical oceans will be affected by 2030 and tropical forests and higher latitudes by 2050. The slower the rate of warming and the lower we can keep maximum warming the better it will be for ecosystems and the more time it will give humanity to prevent and prepare. This is another study demonstrating that the changes induced by climate change are likely to be sooner, more abrupt, more widespread and more catastrophic than was believed as recently as the signing of the Paris Agreement in December 2015. (Not surprisingly, climate change and its effects on ecosystems also affects migratory species such as robins.)

If I covered all of Trump’s assaults on environmental regulations in the USA, I’d have a full-time job and you’d be bored. The World Resources Institute has slimmed it down to the seven most serious: disregarding the science about climate change and other environmental issues; dismantling Obama’s Clean Power Plan which was reducing greenhouse gas emissions from power stations; blocking Bush Jnr’s policy to phase out inefficient lightbulbs; opposing domestic legislation to implement a global agreement to eliminate hydrofluorocarbon use in air conditioners and fridges; rolling back rules to limit methane leakage from oil and gas supply chains; weakening rules to produce more fuel-efficient and less polluting vehicles; and withdrawing from the Paris Agreement. Apart from the damage done to the environment, two things stand out. First, many of the laws and regulations that Trump is destroying were introduced by Republican administrations. Second, the changes are harmful to people’s health, destroy existing or potential jobs, reduce exports, and cost families, businesses and governments more. Well done, Donald: lose, lose, lose, lose.

Johan Rockstrom is one of the world’s leading and most vocal climate scientists – a veritable Rockstar! For his contribution to Earth Day celebrations, Rockstrom spoke (at 3.06-3-25 hours) lucidly about the current social, health and environmental crises. He stressed the need for humanity to create a new relationship with the planet and establish a safe and just operating space for humanity on earth. To achieve this, we need to halve greenhouse gas emissions every decade, which Rockstrom asserts is possible with existing technologies. Not one to mince his words, Rockstrom puts Australia in the same category as Trump, Putin Modi, Xi and Bolsinaro when it comes to taking the necessary climate action.

If you’ve been intending to make a submission to the 10-year review of the Commonwealth Environmental Protection and Biodiversity (EPBC) Act but thought you’d missed your chance, you’re in luck. The deadline has been extended to May 1st (next Friday). Go on, tell Graeme Samuel how strongly you feel about environmental protection, that the act has clearly been failing in recent years, and that you want a stronger act. If you need a hand, have a look at the Australian Conservation Foundation’s guide.

It is no longer a request. It is a mandate.

We will help you.

This is the start of a poem that coronaviruses have thoughtfully sent humanity to help us sort out our current problems. And they can speak English – well, what would you expect of such ruthless colonisers! 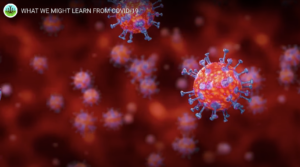