A development plan for the 21st century is needed for northern Australia, perhaps informed by lessons from the Niger Republic. Three stories from north America: dead ‘penguins’ along the west coast indicative of severe ecosystem disruption caused by ocean warming; Trump fails to halt coal’s decline; and US Department of Justice provides support for oil companies being sued by city governments. Finally, 2019 was a very hot year.

Where lies the future of northern Australia? Does it lie with the Commonwealth Government’s 2015 white paper: endless fossil fuel extraction and plans to turn vast swathes into river-, land- and ecology-destroying irrigated food bowls, funded by (often foreign) billionaires searching for profits? Or would an emphasis on local voices, the natural environment, Indigenous culture and local industry provide a more economically and environmentally sustainable future? Martin Pritchard, CEO of Environs Kimberley based in Broome, canvassed these issues and called for a new white paper in (remarkably) The Australian earlier this week (google ‘Northern Australia deserves a better plan’). More predictable were many of the comments to Pritchard’s paper.

From northern Australia to Niger in the Sahara and a story of another unsung Australian hero. Tony Rinaudo and his family lived in Niger for most of the ‘80s and ‘90s while Tony was managing a reforestation project in an area on the edge of famine and ecological collapse from deforestation, land degradation and loss of soil fertility. Tony’s successes and the lessons he learnt are highly relevant to Australia today.

We all remember the marine heat waves in the summers of 2016 and 2017 that caused coral bleaching and then death to a large part of the Great Barrier Reef. But it is not only coral reefs that die in marine heat waves. Research has attributed the deaths of thousands of common murres (think small penguins that can fly) along the west coast of North America from California to Alaska during 2015-2016 to the effects of record-breaking warming of the Pacific Ocean. They died of undereating rather than overheating. This started when older, fatter, nutritionally richer species of zooplankton at the base of the food chain were replaced by smaller, less nutritious species that normally live further south but moved north in search of cooler water. This made the small fish that feed on the plankton leaner. To make matters worse, an increase of a couple of degrees of the water temperature leads to a doubling of the metabolic rate of the larger fish that, like the murres, feed on the smaller fish and they have to eat twice as many. Less nutritious food and greater competition for it led to the murres (and through similar processes other species such as puffins, sea lions and whales) missing out and starving to death. The scientists calculated that about 25% of the marine warming was attributable to global warming. Marine heat wave frequency has doubled in the last 35 years and is projected to increase 20-50 fold this century depending on how much more global warming we experience. Only as our understanding of ecological complexity increases will we begin to appreciate the full consequences of global warming not only for our companion travellers on Planet Earth but also for ourselves.

One of Trump’s election-winning promises was to rescue the USA’s coal industry. So how is he going? The true story (definitely not fake news) is told in the following graphs:

Trump is clearly not the messiah, just a very naughty boy. On the positive side, the USA’s greenhouse gas emissions fell by 2% during 2019.

The close relationship between government and some too-big-to-fail industries (e.g. banking, gambling, alcohol, armaments and, of course, fossil fuels) is a frequent concern of the public and political commentators. By ‘close relationship’ I’m thinking of political donations, ministers’ open doors to well-funded lobbyists – many of who are ex- political colleagues or opponents, the revolving door of staff between government and industry, and industries having privileged opportunities to comment on draft policies and legislation, and even drafting them for governments. But this example from the USA suggests that it may be more than money buying special access or the old boy (fact not sexism) network  or family cronyism. In 2017 the cities of Oakland and San Francisco began legal proceedings against oil companies to hold them liable for the damages done by climate change. In 2018 the Environment and Natural Resources Division of the US Justice Department initiated meetings with the oil companies to discuss the submission the Department of Justice was preparing for the court that supported the oil companies. There were no similar approaches to Oakland or San Francisco city councils, which you might have expected were the Department trying to act impartially. This begs the question of whose interests the US government were protecting: the American people’s or the oil industry’s. And more deeply, is it any longer appropriate to think of any particular industry and any individual national government as being simply ‘too close’? Perhaps in many cases they have become one and the same thing – all part of a global capitalist class that transcends party politics and geography and is devoted to plunder.

As the graph below demonstrates, globally 2019 was the second hottest year on record, beaten only by 2016. But more telling is the table that shows that the 2010-2019 decade was the hottest decade on record (middle column temperatures compared with 1951-1980 mean), and that each of the last four decades has been hotter than the previous one and, with one exception, by an increasing increment each decade (right hand column). For Australia, 2019 was the hottest year on record, a staggering 1.52oC above the 1961-90 average. (Yes, I agree, why do they all use different baselines?) 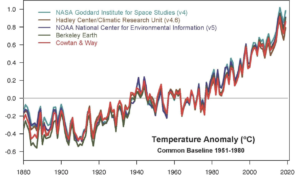