PETER SAINSBURY. Sunday environmental round up, 26 May 2019

Some pieces this week relevant to the causes of Labor’s problems last Saturday. Was their environmental message wrong? – not according to a recent report suggesting sea level rise of up to two metres by 2100, or the forced migrations that will occur as temperatures rise, or the rapidly falling price of wind, solar power and batteries pushing coal and gas out of the picture. Was the right message badly sold? – Lord Stern firmly believes the transition to 100% renewable energy will be good for the economy and jobs. Maybe he could have done a better selling job. Were Labor too timid? – would a promise to declare a ‘climate emergency’ have helped Labor’s cause? Or is Australia simply reflecting a global lack of political will to take meaningful climate action as the UN Secretary-General recently stated in New Zealand?

I have received multiple emails this week from groups that I am associated with telling me that the result of last Saturday’s election may have been disappointing for environmentalists but the scientific evidence hasn’t changed, the environmental problems haven’t gone away and we must not lose heart. True … but how do we convey the scale and urgency of the issues to people frightened about their jobs? Are the terms ‘global warming’ and ‘climate change’ too benign? Is ‘climate disruption’ too obscure. Does ‘climate emergency’ provide too many opportunities for authoritarian, top-down control, as suggested by a writer highlighted last week? Concluding that ‘calling a spade a spade is an important step forward’, David Spratt traces the history of discussions about a ‘climate emergency’.

The Sundarbans is an area of mangroves and low lying islands in the delta formed by the confluence of three rivers on the India-Bangladesh border. The impact of rising sea levels on the lives of inhabitants of the Sundarbans is illustrated in a short video in this article describing research suggesting that sea level rise by 2100 may be as much as two metres – double the current forecast. The increased estimate is due to the Greenland and Antarctic icesheets melting more quickly than previously predicted. A two-metre rise would displace hundreds of millions of people in coastal towns and cities and destroy vast areas of prime agricultural land all around the world. In another very short video in the same article, UN Secretary-General Antonio Guterras unequivocally states that as things are getting worse on the ground international political will to take action on climate change is fading. Thanks Antonio, a world leader prepared to call a spade a spade.

A New Zealand study of global migration patterns between 1980 and 2015 has concluded that the increase in natural disasters caused by climate change has contributed more to migration patterns than income and political pressures combined. Increasing temperatures between now and 2050 will put pressure on food and water supplies and exacerbate the problem. Increased domestic and international tensions will be an inevitable consequence.

The dramatic and game-changing decline in the price of electricity generated by wind and solar is well known. Even more rapid price falls are now being seen in the price of battery storage – 76% decline since 2012. Renewable energy sources are now the cheapest way of mass-producing electricity (the traditional role of coal) in many countries and are threatening the balancing role that gas-fired plant operators have been hoping to play during the transition to 100% renewable energy. 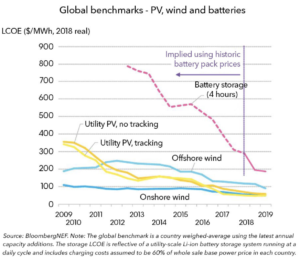 And if Labor’s defeat last weekend was partly attributable to their failure to sell the message that a coal free economy will be good not only for the environment and human health but also for jobs and the economy, perhaps they should have brought Lord Stern out from the UK to do the job for them. In this 4 minute BBC video Stern is unequivocal about the economic benefits that will accrue from going zero carbon.