A report on levels of peace around the world demonstrates that climate change is associated with conflict and forced migration. On-demand bus services and electric vehicles are proving popular, economical and good for the environment. Is social collapse arising from inaction on climate change inevitable and if so how do we prepare for it? Deforestation continues to rise despite declarations of intent to the contrary.

Every year the Institute for Economics and Peace produces the Global Peace Index which measures and ranks the level of peacefulness in 163 countries covering 99.7% of the world’s population. The 2019 report includes research on climate change (pages 43–56) for the first time. Important findings include:

A synopsis of the whole 2019 report can be found here.

As I’ve mentioned previously, although transport is one of the more difficult sectors to decarbonise, there are actions that will reduce its emissions. Greater use of public transport rather than private cars is one approach and in western Sydney they are having some success with making buses behave a bit more like your own car. The on-demand bus service has provided 20,000 rides in three months, with 55% of the passengers being tempted away from their own car. Electric vehicles (EVs) are clearly part of the response for cleaner transport. So, as both a taxpayer and an environmentalist, it’s reassuring to see that over the life time of the vehicle it’s now cheaper for governments (which buy 38,000 cars per year across Australia) and corporate entities to fill their fleets with EVs. Even the NRMA sees the economic and environmental sense in moving to EVs.

Professor Jim Bendell has developed an immense following over the last year since he published a paper on his website that had been rejected by a peer-reviewed journal (of which he was a member of the editorial board) because it was too depressing and threatening. Bendell had become convinced that social collapse is now inevitable as a result of climate change, or perhaps more accurately as a result of the complete failure of governments and intergovernmental organisations to respond on the scale or with the urgency required. Consequently, argued Bendell, the world needs to place far greater emphasis on ‘deep adaptation’ to the inevitability of that social collapse. This comprises 4Rs:

I personally am quite taken with Bendell’s ‘deep adaptation’ thinking and recommend this 30-minute talk from February 2019 to become further acquainted with his ideas. If you’re interested in learning more about how the deep adaption ‘movement’ has developed since February, there’s lots of information on his website.

In 2014 nearly 200 governments and companies signed a declaration to halve deforestation by 2020 and stop it completely by 2030. But as the graph below demonstrates, things are going from bad to worse. A new report stresses the importance of Indigenous land rights and the need for concerted action from governments, agribusiness, investors and consumers. 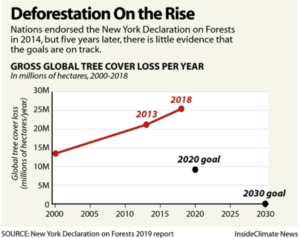