The United Nations, The Lancet, Australia21 and Extinction Rebellion all, in their various ways, reckon that the environment and human health are going to hell in a handbasket while oil and gas companies invest big to ensure that we don’t run out of fossil fuel energy to get us there. Reassuringly, the majority of Australians want strong government action to tackle climate change and other environmental problems. But how many politicians are listening?

In March the United Nations Environment Programme (UNEP) published the sixth Global Environmental Outlook: Healthy Planet, Healthy People. It paints a miserable picture of the state of the environment, the implications for economic prosperity and human health and wellbeing, and the time available for corrective action. The first point of the Key Messages document sums it up well: ‘… the overall environmental situation is deteriorating globally and the window for action is closing.’ You name it – greenhouse gas emissions, air pollution, biodiversity loss, marine plastics, land degradation, natural resources, freshwater, oceans, antibiotic resistant infections, harmful chemicals in the land, water and air – the situation is bad and deteriorating, especially for disadvantaged and vulnerable populations.

A follow up paper in The Lancet ranks biodiversity as the most damaged domain of the earth system, followed by the air, oceans, freshwater and finally the land. Emphasis is, however, placed on the possibility of synergistic interactions across the different domains and the likelihood of crossing multiple tipping points such that the earth’s health deteriorates with increasing speed, with devastating consequences for human health. The authors call for policymakers to ‘… fundamentally change the pathway of human economic and social development towards ensuring a healthier planet and healthier people’. What the authors regard as fundamental change is left hanging. (The figure in this paper, reproduced from the UNEP report, is depressing but worth viewing.)

Unconnected with, but very relevant to, the UNEP and Lancet reports, Australia21, an independent think-tank focusing on solutions to ‘wicked problems’, has produced five 15-25 minute podcasts exploring the linkages between ten existential threats to humanity: climate change, human population growth, food insecurity, ecosystem destruction, resource depletion, threat of nuclear war, uncontrolled technology and artificial intelligence, global poisoning, pandemic diseases and the self-delusion that we can somehow escape the consequences of our actions. The developers suggest that listeners organise small groups to discuss the issues and formulate responses to ‘The Five Big Questions’. Pearls & Irritations would be interested to receive articles of up to 1000 words based on any group discussions.

Oil and gas companies, led by ExxonMobil (remember last week’s story about their lobbying in the EU) and Shell, are planning to spend US$4.9 trillion to develop new fields, mostly for oil. Without this investment the supplies of oil and gas will (desirably in my view) plummet as existing wells dry up over the next 30 years; and so will the value of the companies and their shareholders’ stock. But with the investment, production will increase above current levels. Inevitably, the proposed oil and gas field developments are incompatible with keeping global warming under 1.5oC. Interestingly, the natural decline of production levels from existing oil and gas fields just about matches the trajectory required to stand a chance of staying below 1.5oC. Global Witness, who authored the report into oil and gas company plans, recommends that investors should require the companies to explain how each proposed capital expenditure to develop a new field is aligned with the Paris goals – if for no other reason than to protect their own investments. Droll amusement might be obtained from the on line comments in response to a Financial Times article on this report: ‘What about coal? … and cows? Gas has lower emissions than coal. We need to control demand, not supply. Climate action is too costly. Oil has done so much good,’ etc. (You will need to Google ‘Big Oil’s $5tn investment is incompatible with the Paris deal’ to access the FT article.)

In a ray (well, maybe just a single photon) of good news for the environment this week, the Australia Institute has published the results of a survey in February and March of 1,536 Australians about their attitudes to climate change and other environmental issues. And what do you know, people want action:

Extinction Rebellion has been grabbing the public’s attention in the UK – not so much here. The British Rebels are demanding three things of their government: to tell the truth and declare a climate and ecological emergency; to reduce carbon emissions to zero by 2025; and to create a citizens’ assembly to lead on climate issues. For a funny-angry perspective, have a look at this 4-minute video by Jonathan Pie (language warning BTW). 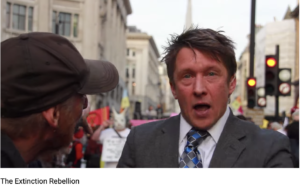