Stories from the USA, Britain and Australia about the links between Black Lives Matter, climate change and inequality. Investment in renewable energy continues to climb but it remains woefully inadequate to head off a climate catastrophe. Abandoned oil and gas wells spew out methane but Themeda Green brings happiness.

What does Black Lives Matter have to do with climate change? Everything, according to Adelle Thomas and Rueanna Haynes who demonstrate the harmful intersections of race, poverty and climate change. The authors start with a focus on the USA and the systemic and institutionalised racism that has led to the suppression of educational, social and economic opportunities for and development of Black communities; police brutality and the murder of Black people; residential segregation resulting in higher exposure and vulnerability of people of colour to air pollution, high temperatures and extreme weather events such as hurricanes and flooding. The links between and need for racial and climate justice globally are illustrated with particular reference to small island states and developing countries in Latin America. The painfully slow progress of international climate negotiations is highlighted as part of the problem. For me, we need more than climate activists merely ‘standing in solidarity’ with the Black Lives Matter movement or Australian Indigenous rights organisations or climate-threatened Pacific Island nations. This requires the whole environmental movement giving equity (racial, social, economic, national, etc.) as much attention as action on climate change and biodiversity (and more) in its concerns and demands.

A couple of years ago Professor Jem Bendell developed the concept of Deep Adaptation as a response to what he sees as the inevitability of social collapse, possibly in the near future, as a result of climate change. The response to Bendell’s ideas has been remarkable. On the one hand, not everyone agrees with his apocalyptic analysis, or even the wisdom of expressing such views. On the other hand, he has attracted an enormous group of similarly concerned followers. In this recent post, Bendell has summarised the recent warnings of many leading climate scientists about the collapse of human civilisation as we know it. To give just one example, from world-respected Australian scientist Will Steffen: ‘We are already deep into the trajectory towards collapse … The intervention time we have left has, in many cases, shrunk to levels that are shorter than the time it would take to transition to a more sustainable system’. According to Bendell, these warnings ‘… are being lost in the winds of news cycles and drowned out by scientists who prefer assessments that are less challenging to humanity and our elites’.

One of the articles quoted by Bendell tackles similar issues to the previous two paragraphs but with an Australian bent. The author broadens the discussion from social inequalities and climate change to pick up on mass species extinction and food security problems and speculates about underlying causes: the size of the human population and the eternal economic growth demanded by neoliberalism, both unsustainable some say. The failure of governments to take the necessary actions over the last thirty years again features. Retired CSIRO scientist Graham Turner is blunt: ‘… there’s an extremely strong case that we may be in the early stages of a collapse right at this moment. Vested interests and corrupt politicians combined with a population happy to deny problems overwhelm those that are trying to promulgate truth and facts’.

The UN Environment Program, Bloomberg New Energy Finance and the Frankfurt School have jointly released a report on global trends in renewable energy. The good news is that the prices of renewable energy continue to fall and deployment continues to expand. Globally, in 2019 renewables (wind, solar, biomass, geothermal and small hydro) accounted for over three-quarters of new electricity generating capacity and investment in renewables was over three times greater than investment in fossil fuel electricity plants. The big renewable investors in 2019 were China (US$83 billion) and the USA (US$56 billion – almost the same as Europe collectively), with Japan next on US$17 billion. Australia came in eighth, investing US$5.6 billion. In 2019 renewable energy technologies (excluding big hydro) produced 13.4% of electricity globally (c.f. 5.9% in 2009).

The not-so-good news is that investment and deployment are currently nowhere near enough. I’ve tabulated below the report’s figures for (1) what happened during the last decade, (2) the investment and building that will be needed by the 87 countries and 222 private companies that have renewable energy policies to meet their own policy commitments and (3) what will be required to keep global warming under 2oC. India, Germany, China and Saudi Arabia are the countries that have the most building to do to meet their own policy commitments. It’s worth noting that the figures in columns (2) and (3) below are at the 2019 prices of installing renewable energy and that a trillion dollars in the next decade is going to build a lot more gigawatts than during the last decade.

It’s been well documented that methane levels in the atmosphere are increasing again after levelling off for a few years. One reason is leakage from improperly plugged abandoned oil and gas wells. In the USA alone in 2018, 3.2 million abandoned wells emitted at least 281 kilotons of methane; that does about as much climate damage as the oil burnt by the USA daily (pre-COVID). And the problem is set to get worse as more and more wells come to the end of their natural lives and some companies go broke during the current recession and simply walk away from their responsibilities. In fairness to the USA and Canada, they are the only two countries monitoring these emissions and there are probably another 26 million abandoned wells around the world. And then there’s the leakage into the land and waterways

To finish on a lighter note, Leanne Hales is a Volunteer Coordinator for Bush Heritage. Her husband, Paul, is the manager of Bush Heritage’s Yourka Reserve in the Einasleigh Uplands about 130 km south-west of Cairns and Leanne herself spends a lot of time working on the property. Yourka has some very special places but it’s Themeda Green that makes her happiest and brings out her poetic gifts. 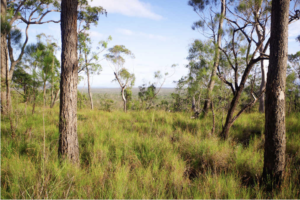