Six deep transformations in the structure of society will be required to meet the SDGs and the Paris goals – but are the proposals deep enough? Net zero emissions is ‘Mission Possible’ though for the hard-to-reduce industrial and transport sectors of the economy, even if the Trump administration is hell bent on reducing environmental controls, including on the rapidly rising methane emissions.

Two of the heavy hitters in economics and climate science, Jeffrey Sachs and Johan Rockstrom, have identified six ‘deep transformations’ that will be required globally and across all sectors of society to meet the Sustainable Development Goals (SDGs) and the Paris Agreement on Climate Change. (Unfortunately the original paper is behind a paywall.) Underpinning the six transformations are the ‘leave no one behind’ principle and decoupling human wellbeing from environmental degradation through ‘circularity’ which includes net zero greenhouse gas emissions by 2050 and the reuse and recycling of materials.

Briefly the six transformations cover investments in: 1) education, reducing gender and other inequalities and R&D, all with the intent of building human capital; 2) health and wellbeing, primarily through universal health coverage and healthy lifestyles; 3) universal access to decarbonised energy systems and reduced pollution; 4) efficient and resilient agricultural systems and fisheries, restored land and water ecosystems, and reduced food insecurity; 5) better water, sewage disposal and transport systems, housing, greenspace and resilience to climate change in human settlements; and 6) universal access to IT systems and artificial intelligence. Encouragingly, social activism to change norms and behaviours is promoted, and peace is recognised as the ‘most essential foundation of sustainable development’.

At several points the authors emphasise the necessity of ‘deep, structural changes across all sectors of society […] economic, political, technological and social’. However, underpinning everything is explicit support for economic growth – the authors’ deep structural change does not include any challenge to today’s dominant political economy or any consideration that economic growth has landed us in the pickle we’re in today. Also, one has to question any commitment to reducing inequality that includes: ‘… to further reduce inequalities, countries need to expand social safety nets.’ Generous safety nets are essential for relieving the suffering of society’s most disadvantaged but they make no contribution to reducing society’s structural inequalities. In fairness, there is one mention of the need for income redistribution. Bizarrely, as though it’s been slipped in with the hope that no one will notice, this appears in the IT section’s ‘measures to promote digital inclusion’. Not a whisper about wealth redistribution. In essence, this report is a blueprint for a slightly fairer, greener capitalism written by liberal reformers, not a threat to underlying political or economic systems.

Globally the electricity generation sector is the largest contributor (about 70%) to greenhouse gases, but it is also the one which can most readily reduce and eliminate them, by moving to 100% renewable energy. It is generally agreed that some sectors have a much more difficult task ahead of them: the agricultural and land use sector, heavy industry and heavy duty transport. However, a new report from the international Energy Transitions Commission, Mission Possible, is definite that reaching net zero emissions in the manufacture of cement, steel and plastics, and the heavy road transport, shipping and aviation sectors (which collectively produce 30% of today’s emissions) is technically feasible by 2060 (earlier in advanced economies). All at a cost of less than 0.5% of global GDP, with minimal cost increases to the end consumers. Three main strategies can achieve this: reducing the demand for carbon intensive products and services, improving energy efficiency, and deploying decarbonisation technologies across all sectors. Recommended drivers for change include: strict carbon intensity requirements on transport and industrial processes and products; a realistic price on carbon; a circular economy; and ongoing reductions in the price of renewable energy. The report includes good infographics containing specific technological and policy recommendations for each of the sectors considered.

The papers are full of articles saying Trump’s trade war with China is having devastating effects not only on the USA’s economy but also on economies worldwide. That’s not the only area where the President’s policies are creating harm. Since Trump occupied the White House his administration has worked to repeal 84 environmental rules covering, for instance, methane leaks from oil and gas wells, vehicle fuel efficiency standards, carbon dioxide emissions from fossil fuel powered electricity generators (the evil Obama’s Clean Power Plan), drilling on public lands, offshore oil and gas drilling, and protection of endangered species. Not forgetting withdrawing from the Paris Agreement. As we are learning in many areas of public policy, hard won victories should never be taken for granted and forgotten. The price of social progress is eternal vigilance on the marauders.

Methane emissions keep rising but the US Environmental Protection Agency (EPA) plans to eliminate federal requirements that oil and gas companies control the highly significant leaks of methane from new wells, storage facilities and pipelines. The chief executive of the EPA is a former coal lobbyist. 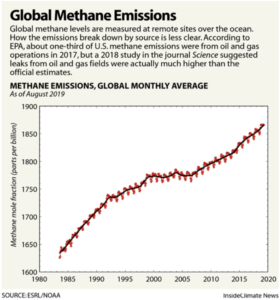