To mixed responses, global and Australian mining giant Glencore has announced that it will not be expanding its coal mining operations. Meanwhile politicians squabble in Canberra over Australia’s greenhouse gas emission projections for the next decade. Waters shortages in Australia create many problems but they are unlikely to result in military conflict; in Africa and Asia water wars are a distinct possibility. To finish, I present an alarming graph of global carbon dioxide emission projections from fossil fuels to 2050.

Last week Glencore, a massive miner on the world stage with many coal mines in Australia, including some coal mine expansion proposals currently under review, announced that in recognition of the need to tackle global warming and achieve the Paris Agreement goals it had decided not to undertake any further expansion of its thermal coal production. Glencore will also be reviewing its membership of trade associations such as the Minerals Council of Australia. Responses to Glencore’s announcement have been mixed. Is this a response to shareholder pressure? Is this simply greenwash from a company with an unenviable environmental and human rights record? Is it great news for the environment? Are Glencore ruthlessly protecting their profits and market position, as Resources Minister Canavan alleges? Will Glencore demonstrate its commitment by withdrawing its current coal mine applications? Regardless of Glencore’s motives, their decision does seem to send a message from a very significant player about the direction of change, if not the speed of travel.

Pearls & Irritations has published articles (here and here) concerning the Commonwealth government’s greenhouse gas emission projections and ministers’ claims that Australia will meet its Paris Agreement emission reduction targets ‘at a canter’. In Senate estimates committee on February 19th Labor senators Keneally and Urqhuart questioned Coalition senator Birmingham about the claim and the projections (not to be confused with, in government-speak, ‘forecasts’). The exchanges between the combatants were both interesting and somewhat enlightening about the current government’s thinking.

Australians are no strangers to drought and water shortages and the current failings of the Murray-Darling Basin Plan illustrate very clearly not only the terrible effects on the environment and communities but also the conflicts of interest that arise between the states along the river basin. It seems unlikely, however, that any of the states will take up arms against one of the others. Unfortunately, we cannot rule out the possibility of water wars elsewhere in the world. Eleven countries share the Nile River basin and all want water for their rapidly increasing 300 million inhabitants. As far as we are aware none of these nations has nuclear capability. The same cannot be said for India and Pakistan where conflict over scarce and decreasing water supplies is only one source of tension, but a crucial one.

My graph this week comes from a report by McKinsey (page 29) who have, they assert, used their global expertise to compile a ‘Reference Case’ of what the global energy future looks like. The graph below illustrates their prediction that energy-related carbon emissions will increase until 2024 and then fall slowly to be 22% below the peak by 2050. If McKinseys are correct, we’re toast! 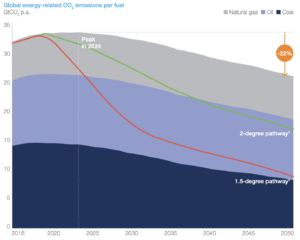