PETER SAINSBURY. Sunday environmental round up, 3 May 2020

Two stories from India: creating environmentally sustainable, healthy cities for the post-COVID world and the installation of cheap solar energy signals the end of coal. Plus, Joseph Stiglitz summarises some principles the Australian government should adopt post-COVID, a literary interlude and a summary of carbon capture and storage.

Over half the world’s population now lives in cities and the proportion keeps rising. Cities also generate the majority of the world’s greenhouse gases and other forms of pollution. Developing countries such as India with large and increasing populations (India will soon be the world’s most populous country) face particularly severe urban problems, made worse by high levels of rural poverty prompting migration to cities with millions already living in slums. Fear of the spread of coronavirus within these densely populated cities has brought India’s urban development problems into even clearer relief. So, what’s the best direction for India’s cities?

Staying in India, the cost of renewable energy in India is now 20-30% lower than the cost of energy from a new power station that uses domestic coal, and 50% below that of a new power station using imported coal. Not surprising then that the Indian government has awarded a tender worth US$2bn to build, anywhere in India, solar plants collectively generating two gigawatt (GW) of energy at the rock bottom price of US$33/MWh. According to Tim Buckley: ‘Renewables are clearly the low cost, zero inflation, zero emissions source of new domestic electricity supply for India. […] This year is likely to prove the beginning of the end for the thermal coal power industry globally.’

Economics Nobel Prize Laureate Professor Joseph Stiglitz was interviewed with Wayne Swan and Richard Dennis during a webinar organised by The Australia Institute on Thursday morning. The whole hour’s interview, ‘The Economics of a Pandemic’, is worth listening to. However, to whet your appetite, when asked at the very end to summarise in less than one minute the best way forward for the Australian government, Stiglitz said:

‘It’s going to take a very large role of government. Individually we cannot attack something like a pandemic or a problem like climate change. We require collective action. And it’s going to take a lot of collective action and that means that there has to be social solidarity. And that has to reflect a vision of where we want our society to be. That’s going to require progressive taxation. It’s also going to entail a green transition and real hard work to create a more shared prosperity than we had before the pandemic.’ Collective action + Social solidarity + Vision + Progressive taxation + Green transition + Shared prosperity. Thanks, Jo, perfect! Not such a dismal science after all.

Last week coronaviruses sent humans a message. This week it’s the earth’s turn. Haroon Rashid versifies on the changes the little blighters have made to our lives and the world’s advice to us.

We fell asleep in one world, and woke up in another.
Suddenly Disney is out of magic,
Paris is no longer romantic,
New York doesn’t stand up anymore,
the Chinese wall is no longer a fortress, and Mecca is empty.
Hugs & kisses suddenly become weapons, and not visiting parents & friends
becomes an act of love.
Suddenly you realise that power, beauty & money are worthless, and can’t
get you the oxygen you’re fighting for.
The world continues its life and it is beautiful. It only puts humans in
cages. I think it’s sending us a message:
“You are not necessary. The air, earth, water and sky without you are fine.
When you come back, remember that you are my guests. Not my masters.”

Continuing the literary line, if you are looking for a book on climate change, The New York Times has compiled a list of 21 fiction and non-fiction titles. NYT readers have added their own comments and recommendations, sometimes complimentary but often served with New Yorkers’ stereotypical outrage and acerbity. I might as well have my say. I’d recommend Klein’s ‘This changes everything’ and Wallace-Wells’s ‘The uninhabitable earth’ (both mentioned in the NYT comments) and also ‘Facing the Anthropocene’ by Ian Angus.

Confused about how carbon capture and storage (CCS) works? The figure below provides a simple explanation. Before P&I readers vent their spleens, let me reassure you that I am not promoting the adoption of CCS, merely knowledge about how it works (in theory at least). Even if it rapidly became effective at scale and economically competitive, it most certainly would not change the urgent need for a rapid reduction of greenhouse gas emissions to net zero. 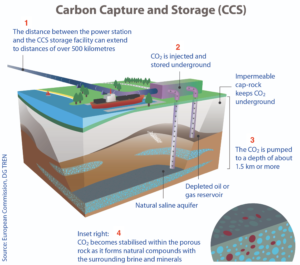