The articles this week provide follow-ups to previously reported items: the NSW government changes legislation to promote climate change; the world’s largest reinsurer models the risks posed by climate change and walks away from coal; melting glaciers are but one manifestation of the changes wrought by climate change in mountain areas; December’s Conference of the Parties climate change meeting moves from Chile to Spain; and 2019 certain to be one of the hottest years on record.

Stunned by the NSW Land and Environment Court and the NSW Independent Planning Commission including the greenhouse gases released when NSW coal is burnt overseas among the factors considered when rejecting coal mine planning applications, the NSW government has responded by announcing plans to amend the legislation to prevent this happening again. Needless to say, the (far-from-independent) NSW Minerals Council is delighted.

Reinsurance companies insure very large assets that are too big a financial risk for ‘high street’ insurers – where a payout on loss of the asset, even though unlikely, would bankrupt the insurer. Swiss Re is the world’s largest reinsurer. In 2018 they collected premiums totalling what sounds like a very healthy US$36.4 billion but during 2017 and 2018 they paid out US$219 billion for catastrophes due to weather-related events. Swiss Re doesn’t care about picking winners and losers as such but their financial survival depends on being experts in modelling, assessing and costing current and future risks. Three of their conclusions are significant: events arising from higher temperatures such as sea level rise, storm surges and landslides will increase as a result of climate change; by mid-century climate change will be a major driver of risks and losses; and the profitability of coal is waning. Part of their response so far is to pull back from insuring and investing in coal miners and burners.

Just like Australia’s Reserve Bank, Swiss Re recognises two sorts of risks to business (read capital) as the world warms: physical risk (damage done by extreme weather events) and transition risk (arising from governments’ policy changes as the world migrates to a zero carbon economy). According to the climate scientist who heads the company’s sustainability-risk management work: ‘climate change might be the problem that humanity is not clever enough to really tackle’. Certainly seems like the problem some of Australia’s politicians are not clever enough to handle.

The melting of mountain glaciers may seem to city-slickers like one of the more localised and less catastrophic changes, apart from shorter ski seasons, to the natural world precipitated by warming temperatures. Nothing could, however, be further from the truth. The warmer winters, decreased snow cover, earlier springs and longer summers that cause glaciers to shrink also cause rockslides, avalanches, flash flooding, changing river flows and decreased water supplies for agriculture and hydropower, and disruptions to ecosystems as insect maturation and plant flowering cycles are pushed out of synchronisation. The cultural, social and economic consequences for Indigenous peoples and local communities in the mountains and valleys are many. Changes to agricultural practices in Ethiopia demonstrate  that local communities can be assisted to adapt, however.

Towards the end of each year the nations of the world get together for two weeks under the auspices of the United Nations Framework Convention on Climate Change (UNFCCC) to discuss how they are progressing with limiting climate change. These are known as COP (Conference of the Parties) meetings, of which the best known is  the one held in Paris in 2015. I reported earlier in the year that this year’s COP would be held in Chile. Unfortunately there has been considerable civil unrest in Chile in recent weeks and the government decided earlier this week to withdraw from hosting the COP. Spain has stepped into the breach and COP 25 will be held in Madrid from December 2-13th. I’ll provide reports on the meeting then.

The first 8 months indicate that it’s 99.9% certain that 2019 will be one of the five hottest years on record, possibly to be beaten only by 2016. If that happens, seven of the hottest ten years on record will have been the last seven years. 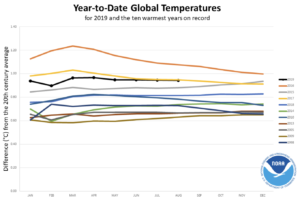