In the USA young people are trying to lodge a legal case against the federal government for failing to protect their constitutional rights, and health professionals are supporting them strongly. Indeed, frustrated at government inaction, health people are getting increasingly active on climate change worldwide. The inaction is well exemplified at current inter-governmental meetings in Bonn and Osaka. Bill McKibben presents a nuanced view of the US military’s contributions to climate change, and a video of life for coastal communities in Senegal graphically displays the difficulties they are facing daily.

Citizens are making increasing use of the courts to force governments to take action on climate change, even though the legal wheels turn slowly. Four years ago 21 young people, including Kelsey Juliana, initiated proceedings against the US Government claiming that government inaction on climate change violated their constitutional right to life, liberty and property. This not the first time that citizens or other tiers of government in the USA have tried to sue the federal government for climate inaction but none of the previous lawsuits has even got to trial. At the beginning of June, arguments in the case of Juliana v. United States were presented to assist the court to decide whether the case will be allowed to proceed to trial. To strengthen the young people’s case, a group of concerned US health experts and health organisations presented a document to the court outlining the harmful effects of climate change on young people’s health, highlighting the dangers of high temperatures, extreme weather events, infectious diseases, food insecurity, and air pollution. The authors stress that for various reasons young people are particularly susceptible to the harmful health effects of climate change. A summary of the arguments presented was published in the prominent New England Journal of Medicine. The US court’s decision on whether to allow the case to proceed to trial has not yet been released. Encouragingly, health professionals across the world are increasingly emphasising that ‘climate change is a health issue’ and are becoming active in the climate change arena, including supporting non-violent direct action (in UK and Australia).

But is the term ‘climate change’ any longer adequate? The Guardian has amended its style guide to ‘introduce terms that more accurately describe the environmental crises facing the world’. ‘Climate change’ is on the way out (too passive and gentle); preferred terms are ‘climate emergency or crisis or breakdown’. Similarly, ‘global heating’ not ‘warming’ is now preferred by the Guardian.

The need for citizens to pressure recalcitrant governments to act on climate change has been well illustrated this week during intergovernmental meetings in Bonn and Osaka. Many readers will recall that last year the UN’s Intergovernmental Panel on Climate Change (IPCC) presented a scientific report on the increasing dangers that will be associated with every fraction of a degree increase in global temperature above 1.5oC and the short time remaining to take action to keep warming below this level. Last December’s climate change (COP) meeting in Poland was prevented from formally adopting this evidence-based report because of the objections of the USA, Saudi Arabia, Russia and Kuwait (ASS – the axis of selfish stupidity). Ignoring the science, expert  advice and the looming climate change disaster, opposition to the IPCC report continues at the current pre-COP meeting in Bonn, with Saudi Arabia and the USA once again leading the charge.

Across the world, Japan is hosting the G20 meeting and seems to be bowing to US pressure to down play any mention of climate change in the meeting’s final communique, even though this has featured in recent G20 communiques. (Google ‘G20 plays down commitment to climate change action’ for a Financial Times article on this.) Japan’s current addiction to coal – burning it at home and funding other countries to build coal-fired power stations – probably plays a part as well.

Remembering Australia’s dreadful record of tackling climate change (unambitious emissions reduction target, intent to use Kyoto credits to meet the target, only country to remove a price on carbon, increasing carbon emissions in recent years, miserly contributions to international climate funds for developing countries, for starters), I suppose we should be grateful that Australia, a consistent delinquent at climate negotiations, hasn’t yet joined these rogue states.

It is commonly asserted (including by me) that the US military has an enormous carbon footprint and reducing it would make a significant contribution to controlling global warming. While this is true, a rather more nuanced view of the situation is presented by Bill McKibben in his review of a report on the Pentagon’s contribution to climate change. The US military’s carbon emissions are about the same as the whole of Sweden but are only 1% of the USA’s. And credit where it’s due, the military have reduced their emissions by 50% since 1991, partly because needing less fuel makes it easier to maintain supply lines to troops. More importantly, the Pentagon has long recognised the security risks associated with climate change and has been a consistent voice on this. Perhaps McKibben’s most telling point is that sustainable energy supplies would reduce the USA’s interests in the Middle East (see article above about the Bonn meeting!) which might reduce the risk of war.

And for a more quotidian perspective on climate change, have a look at this 3-minute video about the effects of climate change and rising sea levels on the lives of coastal communities in Senegal. They know they haven’t caused the problem but that they are the ones suffering the most. At least they have a national climate change adaptation and mitigation plan, which is more than Australia can boast. 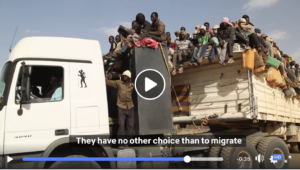