Gas producers slow down climate action in WA, miners meet ministers in NSW almost weekly, cement producers (allegedly) resist the use of fly ash in concrete production in Australia, and big banks, particularly in the USA, continue to invest trillions in fossil fuel companies. But Bill McKibben and Tim Flannery offer some hope for the environment.

Last week I highlighted the climate-action delaying activities of ExxonMobil in Europe. Closer to home, liquid natural gas (LNG) producers in Western Australia have been employing similar tactics to have a proposal from the state’s Environmental Protection Authority (EPA) for all new resource projects to be carbon neutral withdrawn for further consultation. ‘It’s out of step with regulations in the rest of Australia’; ‘It’s unfair on Western Australia’; ‘Gas is less harmful to the climate than coal’; ‘No one consulted us’ they cried to persuade Premier Mark McGowan to intervene. Not to be left out, the Business Council of Australia chimed in too about ad hoc regulation, stalled investment and undermined competitiveness. The EPA has agreed to consult more widely but seems determined one way or another to press ahead with moves to reduce carbon emissions. If WA is anything like NSW though, McGowan and his ministers will no doubt receive lots of visits from the gas producers in the coming weeks. Watch this space.

Bill McKibben, a hero of the climate action movement, a prolific author and public speaker, and founder of the world-wide movement 350.Org, has reviewed a recent report from Carbon Tracker, ‘2020 Vision: Why You Should See the Fossil Fuel Peak Coming’. The report reviews the transition from fossil fuels to renewable energy and asks ‘At what point does a new technology cause an existing industry to start losing significant value?’ Compared with previous technological take-overs (canals to trains, sails to steam, horses to cars, land lines to mobiles) the death of fossil fuels looks like being much swifter. The evidence indicates that coal is already on the way out and oil and gas won’t be far behind. Although fossil fuels collectively still provide most of the world’s energy, most of the investment in new power sources is now going into renewables. Other questions tackled include ‘will the transition to renewables be fast enough to prevent catastrophic global warming?’ and ‘will the transition crash the world economy?’

Talking of environmental heroes, in a major coup for Sydney’s Australian Museum, well-known scientist, naturalist, environmentalist and author Professor Tim Flannery has been appointed Distinguished Visiting Fellow for twelve months. In a Guardian profile, Professor Flannery highlights several serious threats posed by climate change to the environment and humans (emphasising particularly the plight of Pacific Islanders). He thinks that the inadequate action to date of governments almost certainly guarantees that global warming will, at least temporarily, exceed the internationally agreed threshold of 2oC but he is increasingly optimistic that there is a changing mood among the public: ‘bullshit is no longer baffling brains, and so we are about to see a big shift’. Professor Flannery sees a critical role for museums in research, keeping collections and mapping changes, including species losses.

Cement and concrete literally form the building blocks of modern societies and economies and the world pours truly immense, and increasing, quantities of concrete every year – China is responsible for more than half. But cement production also has a large environmental footprint: it generates 8% of global carbon emissions, accounts for 9% of global industrial water use and contributes to air pollution, and mining the sand needed destroys beaches and river beds. Reducing the carbon emissions will be difficult but is possible and necessary for the world to become carbon neutral.

Fly ash, a component of coal ash, a waste product from coal-fired power stations, can be substituted for some of the cement in concrete, reducing the carbon emissions and improving the concrete. China reuses 69% of its fly ash. Unfortunately, efforts to increase the use of fly ash in concrete in Australia may be being held back by cement companies who make more money from cement-based products. That said, one hopes that the supply of Australian fly ash will decrease markedly in the near future anyway.

The smart investors may well be flocking to renewables but banks are still investing shed-loads of money (US$1.9 trillion during 2016-18) in fossil fuel companies, as the two charts below demonstrate. Most of the banks are based in the USA (surprise, surprise) but Canada and Japan feature strongly in the top dozen. JPMorgan Chase takes the gold medal overall and in most fossil fuel categories. 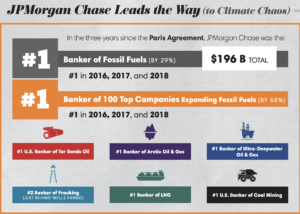