With apologies for the anthropomorphism, Sydney’s newly-hatched Sea-Eagles would like this week’s round up as it focuses on their future habitats: land and marine environments (with good news about soil carbon and regenerative farming and not good news about deforestation and seabed mining). And for once, an example of Australia leading the way on climate change – can you guess what it is?

The big news this week, the news you’ve all been waiting for, is that the two White-bellied Sea-Eagle chicks in Sydney’s inner west hatched last weekend. The picture below shows them at about six days but you can watch them feed and squabble yourself at Eagle CAM. 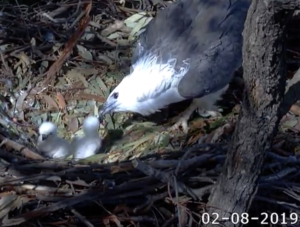 We all learnt at school that plants and trees absorb carbon dioxide from the air, water and nutrients from the earth and energy from the sun and through the wonderful process of photosynthesis create life – indeed, just about all multicellular life on earth is dependent on this process (which I don’t think I did appreciate at school). Nevertheless, putting aside my inattentive youth, it’s easy to understand that plants and trees contain a lot of carbon. Importantly, they also help to put carbon into the soil itself: soil carbon. ‘Natural’ soil is approximately 5% carbon (mostly living and dead organisms) but land clearing and cultivation, especially as practised in the 20th century, reduces this to about 1%. Bearing in mind that about 10% of the world’s land surface has been converted to agriculture, there is tremendous potential to farm differently and increase the amount of carbon stored in farmland soil; thus moving CO2 from the atmosphere to the soil. How do we do this? Regenerative farming … which includes no-till farming, rotating crops and reducing chemicals. Higher carbon soils also benefit the farmers but to make it even more attractive they could be paid to farm regeneratively – a carbon price.

Unfortunately, however, land clearing continues apace in many countries and deforestation has increased dramatically in Brazil since President Bolsonaro took office on January 1st this year. Very high levels of clearing in the Amazon in the early 2000s were reduced by about 80% by 2012 and remained relatively stable until 2018. During 2019, however, with encouragement from the new President and reduced monitoring and enforcement, clearing rates have been steadily increasing for beef and soy production and mining. There is a serious danger that the Amazon will become a net source of carbon rather than a massive sink, and the consequences of deforestation for Indigenous groups are catastrophic, collectively and individually. The IPCC is scheduled to release a Special Report on Climate Change and Land in the next week.

As if destroying vast areas of the earth’s land surface isn’t enough, there’s a serious possibility that we’ll soon start destroying large sections of the seabed. The seabed contains an array of valuable minerals – manganese, iron, cobalt, platinum, molybdenum, copper, lead, zinc, gold and silver – and, while no seabed mining is currently occurring, many companies and governments are gearing up to start exploration (think robotic combine harvesters scraping off the top metre of seabed). Indeed, exploration licences covering more than one million square kilometres of seabed (at depths down to 6,000 metres) have been issued by the International Seabed Authority (ISA), the UN body responsible for regulating seabed mining. The release by the ISA of a mining code in June 2020 will be the starting gun for licence holders.

The problem, of course, is that as we learn more about the seabed, the more we recognise and understand the diversity of lifeforms and ecosystems that exist there. They survive, thrive even, despite the cold, dark, low oxygen and huge pressures – conditions that make growth and recovery from assaults very slow. Needless to say, there are several (potentially irreversible) environmental dangers associated with seabed mining: for instance, disturbing and releasing vast amounts of carbon stored in deep sea sediments (a less well known component of ‘blue carbon’), removal of seafloor habitat and ecosystems, creation of plumes of sediment that fall and smother the seabed up to thousands of kilometres away, alteration of essential biological, physical and chemical processes, and noise and light pollution. Unfortunately the ISA constitution and processes provide little confidence that the precautionary principle will be applied or that the dangers will be properly assessed, never mind regulated and monitored.

A recent Greenpeace report on seabed mining recommended: a moratorium on seabed mining; the establishment of a comprehensive Global Ocean Treaty that would allow countries to establish a network of ocean sanctuaries protected not just from seabed mining but the cumulative threats to marine environments; and gold standard Environmental Impact Assessment processes for seabed mining proposals.

I’ll let Michael Lodge, ISA Secretary-General, have the final say: ‘Once you have mining, you have monitoring, then you can develop standards and you can progressively tighten those standards once you have a feedback loop from monitoring your activity’. Good to hear everything’s tickety boo, Mick, especially as no licence application has yet been refused.

Climate change, back in the 90s, we had decades to get our act together. In 2011, the Climate Commission (remember them?) labelled the next ten years the ‘critical decade’ for ‘putting us on the pathway to stabilising the climate system’. Last year, the IPCC said we had 12 years to avoid warming exceeding 1.5oC and a human and environmental disaster. Now, the next 18 months are seen as critical to making the changes that are necessary to avoid warming of 1.5oC. ‘Critical’ because greenhouse gas emissions must peak globally by 2020 and ‘critical’ because of the series of international meetings scheduled during the rest of 2019 and 2020 where the tough decisions must be made.

There’s one area where Australia is now leading the world in responding to climate change: installing renewable energy, as measured by watts installed per capita per year (see page 10 of link). A further increase is projected for 2019, to approximately 250 watts. 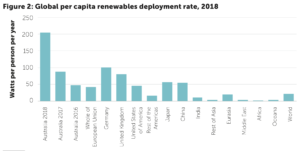