Sunday environmental round up, 5 July 2020

Disgraceful behaviour at home and in the United Nations allows Australia to meet its Kyoto greenhouse gas emissions targets, while our overall environmental performance scores high and low. Corruption and money laundering exposed at the root of the illegal trade in wild animals, and climate change affects deer migration patterns in the USA. Fossil fuels harm your pocket as well as your health.

The Kyoto Protocol was the first international agreement to limit emissions of greenhouse gases. Briefly, in 1997 approximately thirty-five wealthy countries made binding commitments to reduce their emissions compared with levels in 1990 during two periods, 2008-2012 and 2013-2020. The protocol reached its use-by date on June 30th and has been superseded by the Paris Agreement developed in 2015. I say ‘reduce’ emissions but that’s not strictly correct – Australia managed to negotiate merely to limit our increase in emissions. It has grated with climate activists that various governments, particularly Coalition governments, have over many years gloated about the country’s overachievement on its Kyoto targets while doing little or nothing to actually reduce Australia’s greenhouse gas emissions, the only task that actually matters. Indeed, the current government has repeatedly tried to pull the wool over the citizenry’s eyes by emphasising modest reductions in Australia’s astronomically high, but irrelevant in terms of avoiding a climate catastrophe, emissions per person. The reality is that, excluding emissions related to land clearing, Australia’s emissions increased by about 30% between 1990 and 2019. Australia’s coal and gas production have each tripled over this period. This and more is lucidly explained by Michael Mazengarb in Renew Economy. The simple fact is that the members of the government who oppose action to reduce Australia’s greenhouse gas emissions are simply ignorant. They are ignorant about the science of climate change or they are ignorant about its consequences for individuals, societies and civilisation, or both. Their ignorance is driving not just bad but disastrous policy.

The Yale Center for Environmental Law & Policy has produced the 2020 Environmental Performance Index (EPI) which uses 32 performance indicators to measure (on a scale of 0-100) and rank the environmental performance of 180 countries. Most of the Center’s data, mostly regarding 2017 or 2018, comes from independent organisations rather than governments and is verified by a third party. Denmark is the top ranked country with a score of 82.5, while Australia ranks 13th with 74.9. Not surprisingly, countries’ EPI scores increase with increasing wealth. While Australia’s overall EPI is reasonable, it contains vastly differing performances on individual indicators. For instance, Australia is doing very well on air quality, sanitation, wastewater management and marine protected areas (all with scores over 90), badly on sustainable agriculture (49) and loss of grassland (44) and tree cover (25), and abysmally on fish caught by trawling (6.5), fish stocks (0.7) and greenhouse gases per capita (0). The top ranking countries tend to score well in most of the indicators so it’s clear what Australia must do to move closer to the top of the class.

When thinking about the illegal trade in wild animals, it’s easy to focus on the two ends of the chain: the poachers shooting and capturing the animals and the buyers of the live animals or their butchered parts (horns, tusks, scales, skins, meat, etc.) for ornament, food or ‘medicines’. Two new reports shine a light on the magnitude of the transnational organised crime that links the two ends. They reveal the corruption and weaknesses in national and international financial and other regulations that facilitate the movement of animals and their body parts and laundering the financial proceeds of the criminal activities (up to US$23 billion per year profit). One report, written not by an environmental or animal welfare organisation but by the Financial Action Task Force, the world’s major anti-money laundering organisation, highlights how the legitimate wildlife trade, import-export businesses, online markets, social media-based payment systems, fraud and tax evasion are used by criminals to hide and move their illegal proceeds. This is attributed to the failure of many governments, not only those of the countries most directly involved, to follow and combat the illegal trade’s money trail. The Task Force recommends that jurisdictions provide relevant agencies with the necessary mandate and tools to conduct investigations that will combat the financial flows and that relevant national, international and private authorities improve their coordination and exchange of information. The second report by the Environmental Investigation Agency covers similar ground but illustrated with graphic cases studies.

A story about drought affecting the migration routes of mule deer in the USA very clearly illustrates some of the complex interactions occurring in the environment, involving for instance climate change, the dependence of migrating animals on the northern progression of the spring growth of nutrient-rich native grasses (‘surfing the green wave’), the displacement of native grasses by invasive ones, the ‘ownership’ of migrating animals, the cultural beliefs and practices of Native Americans, the economic importance of hunting and wildlife watching for states of the western Rockies, new and expanding residential developments, and (is it ever not a factor??) oil and gas drilling. Two quotes illustrate the complexity and the central importance of climate change. One from a hunter concerned about climate change: ‘There are certainly a ton of other issues that impact the species […]. But climate is the one over-arching threat that impacts mule deer from Arizona and New Mexico to Idaho and Montana’; and the second from a wildlife biologist ‘… when you look at individual species, you don’t see much. The key thing is impacts to habitats. […] I don’t think there’s a state wildlife director today who doesn’t think [climate change is] a real problem’.

Coal and gas keep Australians wealthy – NOT. The Australia Institute’s analysis of share prices (see graph below) clearly demonstrates that investors’ shares would be worth much more now if they’d excluded fossil fuel companies from their portfolios ten years ago – and their returns would have been 8.6% higher. In fact, the situation for fossil fuel shares is even worse than it looks below because if you exclude Energy company shares from the mix, the pre-COVID peak for the ASX 300 is 256 rather than 237. It’s plain to see, fossil fuels kill people; they kill the environment; and they kill your savings. 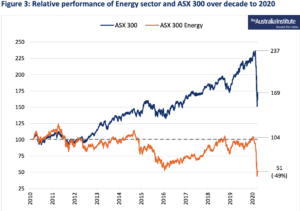