The ‘politics of prevarication and inadequate action’ from Rio in 1992 to Paris in 2015 is followed by stories of the ongoing investment in fossil fuels rather than renewables by G20 governments and major oil and gas companies. China has the potential to generate 60% of its electricity from renewables by 2030 and solar microgrids deliver the goods in emergency situations.

So, what happened between the Earth Summit in Rio in 1992 and the Paris Climate Accord in 2015? If you’d like a better understanding of how the ‘overarching international goal of ‘avoiding dangerous climate change’ has been reinterpreted and differently represented’ over those two decades, this is the paper for you (unfortunately, the full paper is behind a paywall). In only 3½ pages of text and a one-page diagram the authors summarise how the framing of climate policy targets, favoured mitigation technologies, climate modelling methods, scenario planning and political jockeying changed and interacted over the years.

In Rio the focus of discussion was on stabilising atmospheric concentrations of greenhouse gases at a safe level but this migrated to percentage cuts in emissions by a prescribed date in the Kyoto Protocol (1997), to disabling disagreements over targets and metrics in Copenhagen (2009), to cumulative CO2 emissions budgets in Durban and Doha (2011/12), and finally (so far) to a maximum safe temperature increase in Paris. The authors postulate that policies, politics, modelling, science and technology ‘co-evolved’ throughout this period without any single element driving matters along. Their conclusions are not pretty: each technological development and (often exaggerated) promise has ‘enabled a continued politics of prevarication and inadequate action […] in turn justifying existing limited and gradualist policy choices and thus diminishing the perceived urgency of deploying costly and unpopular […] options’; and each technological promise ‘reflected the dominant neoliberal ideology of the entire period in which market-based and technological innovations that could sustain economic growth were actively preferred over measures that might have threatened liberal individualism, markets and consumerism’. Policies which ‘promised future action, rather than immediate sacrifice, clearly made them more palatable to both industry and politicians.’

And right on cue to illustrate the final conclusion, during  the three years of 2016-2018 governments of the G20 countries provided an average of US$77 billion per year to finance fossil fuel projects through their international public finance institutions. This was almost the same as during 2013-2015 – i.e. signing the Paris climate agreement has not changed their behaviours. China was by far the biggest funder (averaging US$25 billion per year), followed by Canada, Japan and Korea (US$6-10 billion each per year). Most of the financing went to oil and gas projects, perhaps a consequence of 17 of the G20 nations having partial or full restrictions on funding coal projects but only three having any restriction on oil or gas. The main recipients of the financing were Russia (averaging US$9.5 billion per year), Brazil (US$8 billion), Indonesia (US$5 billion), Bangladesh (US$4 billion) and Canada, Kuwait and Egypt (US$3 billion each). In comparison, the G20 nations provided about US$24 billion per year to clean energy projects. The ‘Still Digging’ report (accurately subtitled ‘G20 governments continue to finance the climate crisis’) recommends that G20 nations should stop all public funding for fossil fuel developments, and scale up funding for renewable energy projects, energy efficiency, just transition and universal energy access; oh yes, and start matching their behaviour to their rhetoric!

It’s not only governments who are continuing to invest in fossil fuels. Over the next five years major oil and gas companies plan to invest US$17.5 billion in wind and solar projects. Far and away the major investor is Equinor with US$10 billion. Shell starts to invest more heavily in renewables in the second half of the ‘20s but total investment in renewables from 2026-2030 is about 20% less than during 2021-2025. However, the US$17.5 billion for renewables looks wan when compared with the same companies’ plans to invest US$166 billion in greenfield oil and gas projects over the next five years. Consider this next time you see an ad from BP, Shell or Total promoting their commitment to environmental sustainability. Amusingly, here’s what I found on BP’s website when I went searching for their green credentials just now:

Equinor, you may recall, is the large Norwegian state-owned energy company that recently dropped plans to drill for oil in the Great Australian Bight.

An argument advanced by proponents of ‘Australia is too small to make a difference to global climate change’ is that China is the world’s biggest greenhouse gas emitter (about 28% of the total) and they’re building more coal-fired power stations. It’s a little more complicated than that but it is correct that any global success depends on China’s rapid decarbonisation. Currently, about half of China’s CO2 emissions arise from electricity generation. Under the Paris Agreement China has committed to supply 20% of its energy from non-fossil fuel sources by 2030 – good but far from good enough. But a new study that has factored in the continuing plummeting costs of solar and wind power and battery storage (down 77%, 35% and 85% respectively between 2010 and 2018) suggests that 62% of China’s electricity could come from non-fossil sources by 2030, and be 11% cheaper than simply continuing current policies.

As an aside, our own government continues to try to pull the wool over our eyes by emphasising how Australia’s CO2 emissions per capita are falling, ignoring that the really important metric, total emissions, is predicted to increase to 2030. But it’s worth noting that emissions per capita in 2017 in Australia were a massive 15.6 tons, while in China they were 6.5 tons. India, with its booming economy and population, emitted only 1.6 tons per person.

Here’s a terrific idea from the USA and Mexico that might have multiple applications in Australia: a solar microgrid that can be set up in a couple of days to power temporary camps, for instance following a cyclone or bushfire, or during an outbreak of a highly infectious disease in a remote community, or to accommodate climate refugees from islands in the Torres Strait or Pacific Ocean. The microgrid is less polluting, healthier, cheaper to run, quieter and more reliable than traditional diesel generators. This may be old-hat to the engineers among you but to a pen-pusher such as me it sounds promising. 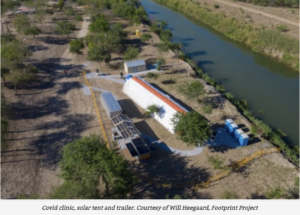