With this year’s climate change Conference of the Parties (COP) getting underway this week in Madrid, the articles this week focus on climate change: the future of coal and renewables in China, problems with projects funded by rich nations in developing countries, climate tipping points, responses to climate deniers’ arguments, and counting and reducing emissions from industrial processes.

I finished last Sunday’s round up with a throw-away line and a link to an article about the coal boom in China and India. I’ve seen many similar articles in the last week but I think this one, originally published in the UK’s very conservative (but quality) Daily Telegraph, is one of the better ones. Evans-Pritchard pulls no punches in describing the current expansion of China’s coal-power fleet – one new large coal plant every fortnight – and its funding of coal ventures in south-east Asia. However, he also highlights China’s concurrent expansion of renewable energy and references the view of Bloomberg New Energy Finance that by 2030 electricity generated by renewables will be so cheap that it will make economic sense not only to stop building any new coal-fired power plants but also to shut even the most modern coal-fired power stations and write off the sunk costs. ‘The hard logic of the market will defeat coal soon enough’ is Evans-Pritchard’s conclusion.

International climate finance is based on the idea that rich developed nations provide funds to help poorer developing nations reduce their carbon emissions and/or adapt to their changing climate conditions. But, despite the funders’ best intentions, the observations by Robert Burns about planning over two centuries ago still apply, as clearly demonstrated by two reports on projects funded by Germany. First, the Green Charcoal Project aimed to improve the efficiency of charcoal production and reduce deforestation in Uganda through the development of sustainably managed native-tree woodlots. What happened was a litany of disasters: native grasslands cleared, non-native eucalypts planted, drought and low survival rate, bare land subjected to erosion when the rains came, communities continuing to use native forests for charcoal production, frequent failures of the new ‘more efficient’ kilns, no provision in the project for equipment maintenance, project abandoned before the first harvest, no monitoring, unverifiable claims of reduced deforestation and carbon emissions.

Second, many communities in developing countries are dependent for cooking on fires or inefficient indoor stoves that burn biofuel (wood or dung). These arrangements create high levels of indoor air pollution that is very harmful to health, particularly of women and children. A popular response is the provision of more efficient, cleaner, low cost stoves; they create less air pollution, are healthier and require less fuel to be collected. The second report reviewed studies that evaluated the impacts of the improved stoves and found no improvement in indoor air quality, no improvement of women’s or children’s health and no reduction in wood use. Reasons included stoves not performing as well in the field as in the laboratory, either through poor planning or sloppy production, and no maintenance support available to users. Oh dear, what depressing stories. How do we keep making the same mistakes?

Climate tipping points are abrupt and irreversible changes, triggered by global warming, in the organic (e.g. forests) and inorganic (e.g. ice sheets and oceans) systems that control global and local climates. The consequences  of passing a tipping point can be extremely serious for the climate and for all life on earth. Recent evidence indicates that some tipping points might be exceeded with only 1-2oC of global warming, not the 5oC that was assumed as little as a decade ago. Irreversible melting of the polar ice caps (resulting in increased absorption of heat from the sun and sea level rise), dieback of the Amazon rain forest (turning it from a net absorber of carbon dioxide to a net source), and thawing of permafrost (releasing massive amounts of carbon dioxide and methane into the atmosphere) are perhaps the best known examples. Less well known is the slowing of the south-to-north current in the Atlantic Ocean (the Atlantic Meridional Overturning Circulation or AMOC) as a result of the melting polar ice sheets. This could trigger droughts in the Sahara, disrupt the East Asian monsoon, cause drying in the Amazon and accelerate Antarctic ice loss. A paper in Nature clearly describes these changes in more detail and makes three conclusions: 1) tipping points are not independent events but are closely interconnected across different biophysical systems; 2) increased knowledge about tipping points reinforces that we are in a planetary climate emergency; and 3) an emergency response is required to limit warming to 1.5oC and avoid a ‘global cascade of tipping points’ that could create a ‘hothouse’ earth.

Don’t know about you but I refuse to engage with climate deniers. Life is too short to waste my time on them. That’s not to say that some climate deniers are not very influential politically and in business circles but Rupert and Gina and their friends don’t frequent my haunts very often. That all said, it is useful to be well acquainted with the more common concerns people express about climate change and be able to respond to them: How can there be global warming when there’s  a snowstorm? Scientists can’t even predict tomorrow’s weather, much less the climate in 100 years. How do we know humans are to blame? Carbon dioxide is good for plants. What about the economy and jobs? etc. etc. To help you, the Climate Reality Project has produced a useful guide: ‘The 12 questions every climate activist hears and what to say’. You can see some of the deniers’ points being made in Craig Reucassel’s short video about Australians’ views on climate change.

The production of materials  for use in buildings, vehicles, etc. created 11.5 gigatons of carbon dioxide and other greenhouse gases (GtCO2e) in 2015 – about 20% of all emissions. Iron and steel, cement, and plastics and rubber accounted for 70%. Multiple strategies are available to reduce the emissions: greater use of renewable energy during the production process, substituting high carbon materials with low carbon ones, creating longer life products and repairing them when they breakdown, and more reusing and recycling. 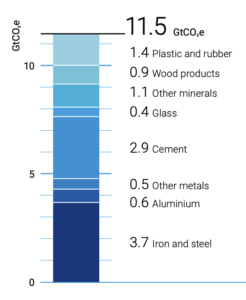