An update on the Adani mine to start and on Sydney’s Sea-eagle chicks to close. In the middle of the sandwich is evidence demonstrating the lethal effects of air pollution and the health benefits of reducing even apparently low levels of pollution, a new World Heritage site recognising the link between Indigenous culture and country in Victoria, and an explanation of why we’ve got only 12 years left to act on climate change.

If you’ve lost the (undoubtedly convoluted) plot of Adani’s Galilee Basin mine story or if an innocent asks ‘What’s Adani?’, I can recommend ‘How one billionaire could keep three countries hooked on coal for decades’ for a very readable synopsis of the story-(almost)to-date. The three countries highlighted are Australia, India and Bangladesh. The latest developments are that Adani has bankrupted Wangan and Jagalingou leader Adrian Burragubba and that the Queensland government has extinguished native title from the Wangan and Jagalingou people for an area covered by the proposed Adani mine.

Emboldened by their election win and the Queensland government’s capitulation on the Adani mine in its aftermath, I see that the federal government has decided to have another shot at destroying GetUp.

I think I can safely take it as given that P&I’s readers accept that air pollution is bad for people’s health. But how bad? And which pollutants?  A new study has correlated daily mortality data and daily air pollution levels in 652 cities in 24 countries. The researchers looked specifically at particulate matter with a diameter less than 2.5 (PM2.5) and less than 10 (PM10) micrometres. On average a daily increase of PM2.5 of 10 micrograms per cubic metre (µg/m3) was associated with increased daily mortality (principally from cardiovascular and respiratory disease) of around 0.65%. Mortality increased consistently as PM2.5 levels increased but, very importantly from a public health viewpoint, the steepest increase was at the lowest levels of pollution. This confirms that there is no safe lower threshold and that there are large health benefits from reducing even relatively low levels of atmospheric pollution. Similar somewhat lower results were found for PM10. (For context, Sydney and Melbourne have average PM2.5 levels just below 7 µg/m3 and Australia’s maximum permitted daily average level of PM2.5 is 25 µg/m3.)

In a clear demonstration of how much can be achieved by improving air quality, PM2.5 levels in New York State fell by around 30% between 2002 and 2012. The cleaner air saved an estimated 5,660 lives per year, a reduction of 67% in air pollution-related deaths.

It passed me by that in July UNESCO approved a new Australian property for the World Heritage List. Budj Bim Cultural Landscape is in the traditional Country of the Gunditjmara people on the south coast of Victoria, 100km from the border with South Australia. Thousands of years ago, the Gunditjmara people created, and then maintained, channels and weirs in the wetlands in and around the Budj Bim lava flow to trap, harvest and store eels, making this one of the world’s oldest aquaculture systems. The UNESCO website states that the Budj Bim Cultural Landscape ‘… is the result of a creational process narrated by the Gunditjmara as a deep time story. [It] exemplifies the dynamic ecological-cultural relationships evidenced in the Gunditjmara’s deliberate manipulation and management of the environment.’ Terra nullius indeed! Well done and thanks to all those responsible for nominating Budj Bim for World Heritage listing.

Confused about what it means when people say ‘we’ve got 12 (11 now) years to act on climate change’? If so, this short and easy to understand explanation might help you. In essence, the author reassures everyone that even if we do nothing in the next 11 years the world won’t come to an end in 2030. Rather, if we want global warming to be below 1.5oC in 2100, global greenhouse gas emissions must peak in 2020 and we need to have actions in place to halve emissions by 2030 and reach net zero emissions by 2050. If by 2030 the world isn’t on such a downward ‘glide path’ for emissions it’s unlikely we’ll keep warming under 1.5oC. That’s what ’12 years to act’ means. Mind you, even if we do get on a recommended glide path, the scientists are saying that gives us only a 2 in 3 chance of staying under 1.5oC. And remember, most proposed emissions reduction pathways don’t keep the world under 1.5oC. Most involve overshooting 1.5oC for a decade or three between  now and the end of the century, with potentially disastrous consequences, and then bringing warming back down to 1.5oC by 2100, using technology that doesn’t yet exist at the scale required.

Australia has a dreadful record of extinctions – 54 animals and 37 plants since 1788. Three animals have become extinct in the last decade and there are currently 89 animals and 191 plants on the Critically Endangered list. September 7th, the anniversary of the death of the last Tasmanian Tiger, was National Threatened Species Day. I imagine it can be seen as a celebration of our biodiversity, a wake for our lost species, an opportunity to highlight the animals and plants currently threatened, or an opportunity to encourage governments to greater action.

Sydney’s two Sea-eagle chicks are now 7 weeks old and growing well. As you can see below, they are beginning to look like eagles. It will be another 5 weeks before they fledge. 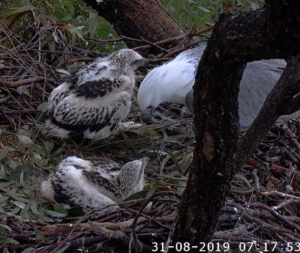