If we’d started the transition 30 years ago, gas might (might!) have been a viable transition fuel but it’s certainly not in 2020 despite what the PM and his gassy friends say.

Coronavirus may have one good outcome: restrictions on international trafficking and trade of wild animals and their parts. Queensland’s Southern Black-throated Finch was voted 2019’s Bird of the Year, but no thanks to environmental protection legislation.

Phew, there’s a relief for all of us in NSW. ScoMo and Gladys have stitched up the perfect $2 billion trifecta to lower electricity prices, reduce emissions and strengthen grid reliability – what more could you want? Part of the deal (but not a commitment according to Gladys) is for NSW to increase gas supplies and remove barriers to coal supply to the Mount Piper Power station. However, ungrateful critics seem to think that cheaper renewables and batteries will make stranded assets of any new gas infrastructure long before their 30 year lifespan is reached, do nothing to reduce gas prices, and continue Australia’s high greenhouse gas emissions. The only interests being served by this deal are those of the PM’s fossil fuel friends.

In his press release on the deal Mr Morrison asserts that ‘There is no credible energy transition plan, for an economy like Australia in particular, that does not involve the greater use of gas as an important transition fuel’. Not so fast, hand-grabber. First, there are credible transition plans that do not involve gas as a transition fuel. Second, gas is very expensive in Australia and buyers are going elsewhere. Result: generation has fallen 41% between 2014 and 2018. Third, sometimes the market gets it right and this is one of those occasions: there is no committed private sector investment in new gas powered electricity generation (or coal for that matter) in Australia’s National Electricity Market. All the committed funds are going into solar, wind, batteries and hydro (a total of 5750 MW). See the two graphs below. 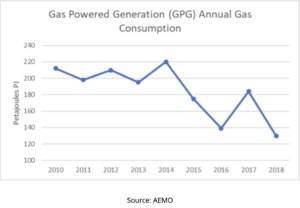 If ever there was a case for gas as a transition fuel from coal to renewables, that case has pretty much gone up in smoke. At point of combustion, natural gas produces about half as much carbon dioxide as coal but (1) that’s still a lot of CO2 and we need to rapidly reach net zero emissions, not net 50% emissions, (2) the production and transport of liquid natural gas (LNG) is in itself a highly energy-intensive process, producing considerable CO2, (3) the production and transport of natural gas releases large amounts of methane which over the first 20 years has 80 times the greenhouse effect as CO2, and (4) wind and solar are now as cheap as, and getter cheaper than, gas. To take two quotations from the linked article: ‘Compared with coal, I think there are a lot of advantages to natural gas, but renewables have a lot more advantages’ and ‘It [natural gas] has served as a bridge but we’re kind of nearing the end of the bridge’.

Initial speculation that the current coronavirus epidemic originated in Wuhan’s wildlife market does not seem to be standing up to scrutiny. However, while the market itself may not be ground-zero, there is no doubt that many of the novel infections that have occurred in various parts of the world over the last few decades have originated in wild animals and then crossed over to humans as a result of increasing contact between wild animals and humans and their domestic animals. This has arisen from greater proximity as wild animals’ natural habitats have been destroyed and urban areas have expanded, and also from the increased trafficking of live wild animals and fresh meat and body parts from wild animals. We have also seen the development of wildlife farming, usually with the animals being kept in disgraceful, unhygienic, unhealthy conditions, to satisfy consumer demands. I have highlighted these issues previously with regard to, for instance, elephants, tigers and pangolins. While the poaching occurs anywhere in the world, the market for wild animals and their parts is dominated by China and South East Asia. One benefit to come out of the current coronavirus infection may, therefore, be increasing scrutiny of this trade in the destination countries. China has already placed a temporary ban on trade in wildlife and there have been many calls, including from within China, for this to become permanent. Human and animal health would benefit greatly from such a development.

The Southern Black-throated Finch, a pretty but until recently little-known bird of central Queensland, of which there are only about 800 individuals left, was voted 2019’s Bird of the Year. The reason for the bird’s sudden popularity is, of course, the publicity it has received since becoming the poster-bird of the Stop Adani movement. The extinction of the species would be a disaster in itself but such an outcome would also be indicative of the loss of an ecosystem. What about environmental protection laws? we all ask. To quote from the December 2019 edition of Australian Birdlife, ‘Since the finch was listed as endangered and protected under Australia’s national environmental legislation, 775 development proposals have requested permission to clear its habitat. Only one has been rejected’. According to Dr April Reside, ‘If the [Federal Environmental Protection and Biodiversity Conservation Act, EPBC] is supposed to protect species from decline and extinction, it has demonstrably failed’. The 1999 Act is currently under review and now would be a good time to let the reviewer know how you feel. 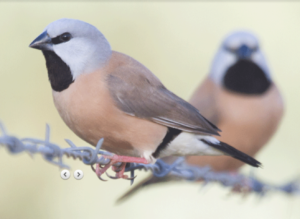 The picture above, taken by L Stanley Tang, is from Birdlife Australia’s website.  I cannot help commenting on the irony of the two beauties sitting on one of humanity’s more barbaric inventions.

3 Responses to PETER SAINSBURY. Sunday environmental round up, 9 February 2020