PETER SAINSBURY. Sunday environmental round up.

Three articles from the USA, all with relevance for Australia. Economist Jeffrey Sachs analyses the costs and timelines for decarbonisation; activist and writer Bill McKibben provides an overview of climate change and climate action at the start of the decade; and essayist Mary Annaise Heglar discusses the relationship between climate change and racism and oppression. Finally reports from the Victorian and NSW governments about their responses to the bush fires.

While the three articles that follow are from the USA and have different starting points and contrasting styles, their fairly consistent messages are thought-provoking and applicable far beyond the Union’s borders.

Professor Jeffrey Sachs is a world-renowned economist and a firm believer in the benefits of capitalism. He is based at Columbia University in New York City but has spent much of his career studying poorer countries and has been heavily involved in developing and subsequently promoting the Sustainable Development Goals. He has long been a strong supporter of action on climate change and now advocates global net zero greenhouse gas emissions by 2050 at the latest to keep global warming below 1.5oC. His five strategies to achieve this are zero carbon electricity generation, electrification of end uses (e.g. vehicles, heating and cooling of buildings, cooking), green synthetic fuels and hydrogen for hard to electrify sectors (e.g. aviation and shipping), smart power grids that can balance supply across multiple sources and users of electricity, and greater efficiency of energy and materials (cement, plastics, metals) use. Sachs goes into some detail about the costs and timelines of decarbonisation in various sectors of the economy in the USA and concludes that (1) the cost of decarbonising is likely to be less than 1% of GDP per year and (2) the marginal if any environmental benefits of decarbonising by 2040 rather than 2050 do not justify the additional costs. Sachs makes many recommendations including a Green New Deal involving all levels of government, the development of national and state plans,  finance provided through the market and by government, regulated emissions reductions in some sectors, a gradually rising carbon tax, and a fair transition for vulnerable groups and regions. ‘Decarbonization to save the planet is actually the greatest bargain of all time’ concludes Sachs but he is in no doubt that it’s not just Trump that needs to be defeated in the coming election, it’s also Big Oil.

Thirty years ago Bill McKibben the writer-journalist became Bill McKibben the climate activist. In the intervening years he has been arrested multiple times, founded the global 350.org movement, continued to write about climate change, delivered who-knows-how-many talks, and been a never-ending thorn in the side of the fossil fuel industry and climate change deniers. McKibben has recently published a very readable overview of the current state of play with climate change and climate action in the New York Review of Books, thirty-two years after he wrote the Review’s first article about climate change. Starting with the conditions that led to Australia’s recent bush fires, McKibben covers many of the same issues as Sachs but paying particular attention to how in the 90s scientists predicted the magnitude of warming correctly (1oC now) but not the magnitude of the impacts of 1oC of warming on weather systems, sea ice, coral reefs, sea levels, human health and migration patterns, etc. Like Sachs, he laments the deceits of the fossil fuel industry, the weaknesses of politicians of all political hues and the decades of inaction – if only we’d started when it became clear what was required the scale of change needed would have been much more manageable – recognises that time is running out to avoid chaos but sees some hope for both the climate and social justice in the Green New Deal. Being an activist himself, McKibben is cheered by the way young people around the world have responded to Greta Thunberg, the uncompromising activities of Extinction Rebellion and the promise of the growing divestment movement to accelerate the demise of fossil fuels. McKibben’s review might be a good starting point for someone who asks ‘what’s this climate change business all about?’.

I’m reluctant to try to summarise the third article because I am in many respects the sort of person that Mary Annaise Heglar, ‘a climate justice essayist’ from New York City, is raging against. So I will limit myself to three quotations from her short article in the hope that it whets your appetite:

[an affable, thoughtful white guy asked me] ‘What do you say to people who claim that connecting climate change to racism might alienate people who might otherwise be on your side?’

‘You have to examine the histories of deforestation and fossil fuel infrastructure, and if you do that honestly you land at colonialism and slavery, and see that the climate crisis is intricately interwoven with structural racism and economic inequality and patriarchy.’

Closer to home, in early January the Victorian Department of Environment, Land, Water and Planning conducted desktop assessments and consulted experts to understand the impact of the fires on Victoria’s biodiversity, identify species at immediate risk and develop a range of actions. Some of the findings are horrendous: high biodiversity areas were most affected; over 170 rare and threatened species had more than 50% of their habitat affected; 70% of Warm Temperate Rainforest was within the fire zone; and significant areas of habitat have burnt several times since 2000, threatening Alpine Ash regeneration. Remember, this was the damage visible in early January. Important actions in the immediate and short-term included: providing supplementary food, water and artificial habitat; protecting significant unburnt areas and populations; intensive control of feral predators (foxes and cats) and feral herbivores (deer, pigs and horses) in burnt and adjacent areas; translocation of critical flora and fauna species; and reconnaissance of critical species and habitats. Longer term actions included maximising resilience of significant populations (e.g. by translocations and captive breeding) and enhancing the connection to Country of Traditional Owners. It’s reassuring to see the Victorian government taking such prompt action. NSW has produced a similar report – see the summary of impacts below. Have any other states and territories conducted similar assessments? (Brett Summerell from the Royal Botanic Garden Sydney estimates that between three and seven billion trees have been burnt by the fires.) 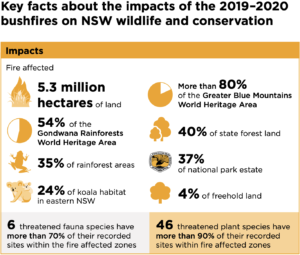