The 50th anniversary of perhaps the most important event Australia’s relations with Asia, or even in its history, was barely noticed when it passed this month.

This was the day in 1971 when a small, hastily-assembled group of Australian table tennis players and officials met the Chinese prime minister, Zhou Enlai, in Beijing’s Great Hall of the Peoples and were greeted with the words: ‘You have opened the door between the peoples of Australia and China.”

It marked Australian participation in China’s pingpong diplomacy – Zhou’s great gamble to try to force an opening for China to the outside world. Those table tennis players were part of another gamble – a move to break through Canberra’s rigid embargo on any form of contact with the communist regime in Beijing.

The story began in the Tokyo spring of 1971, with table tennis teams from around the world attending the world championships in Nagoya, Japan. The word had gone out that Beijing might invite all the participating teams to visit China after the championships as its first step in breaking out of its two decade enforced isolation.

And sure enough as soon as the players had stopped hitting balls at each other we heard that the invitations had gone out to all the teams. Only one seemed to have missed out – Australia. Tokyo-based correspondents, of which I was one, immediately contacted the leader of the Australian team, a Dr. (medical) John Jackson, still in Nagoya to find out why. We were told blandly there was no invitation for Australia. Most assumed it has something to do with Canberra’s vitriolic anti-Beijing policies.

But this did not make sense as players from even some of the most anti-China of the Latinos had been invited. As the first to be nominated by Canberra in its belated 1958 move to start a training program in Chinese language for government officials I wanted to follow up. I told Jackson I would help him to find a place to stay if he got to visit Tokyo.

Three days later I got a call from him and ended up trying to find a Japanese-style inn for him. A few hours later I got another call complaining they are making him sleep on tatami straw mats. He wanted a hotel, not a horse stable, he said. It was a cold, rainy night so I decided it was simpler to invite him to stay in my apartment where a few days later he discovered the US team was being greeted as heroes in Beijing. He told me, sotto voce, he was also invited to go but on instructions from Canberra he had refused. He was told a Taiwan visit for his team would be arranged instead.

But had anyone gone to Taiwan? Only one it turned out. In that case why not go to Beijing? Jackson agreed. I sent a cable in his name to Beijing saying he now wanted to accept the invitation. The reply was immediate: Please come and bring your team.

We scrambled to find a team – just three players and two officials. With funds provided by the then progressive The Australian(John Menadue was the General Manager) we headed in secret for Hongkong, then the entry point to China. At the Lo Wu border we initially were refused entry because some of us had Taiwan visas. Only after long discussion were we finally allowed in, first to Guangzhou and then onto Shanghai and the historic meeting with Zhou Enlai in Beijing.

By this time Beijing had begun to allow entry for other Australian correspondents. The Australian media was bubbling with the excitement of it all. Even the conservative coalition government of Billy McMahon in Canberra was beginning to admit maybe it was time to take China seriously. But at a special Beijing briefing arranged for myself and Max Suich from the Fairfax stable we were told Canberra’s past hostile policies meant China might favour more friendly Canada in future wheat purchases – then a hot issue in Australian politics.

Back in Australia some in the ALP began to realise the chance to use the wheat question to attack the Coalition. I got a call from Mick Young saying he and some others were trying to persuade a reluctant Gough Whitlam to make a visit to China. What reception could he expect? I repeated Zhou Enlai’s words of welcome for us. The Whitlam visit went ahead, with the predictable criticisms from the conservative media about his meeting with Zhou Enlai. Zhou, Billy McMahon intoned, had played Whitlam like a trout.

I met Whitlam in Tokyo on his way out of  China and was able to tell him the news that US Secretary of State, Henry Kissinger, had secretly visited Beijing for talks with Zhou at around the time of his visit. Whitlam erupted: ‘When I get back to Canberra we will show Billy who is the trout.’

Back in Canberra he went on the attack and Billy went to a well-deserved defeat in the November 1972 elections. China policy had been a big issue, with Whitlam promising immediate opening of relations if elected. But few realised how much chance and luck had been involved in all this. But for a little known Adelaide doctor refusing to sleep on tatami mats on a cold wet Tokyo evening it is quite possible Australia would have been saddled with three more years of Coalition policies. Australia would have lost the reforms and changes triggered by Whitlam’s election. We may never have seen that run of ALP prime ministers in the seventies.

In short this Beijing visit had a momentous impact on Australian history. But as one of the players, Steve Knapp, has told me the 50th anniversary of the visit has hardly been noticed. The players have maintained their China connection and have gone on to do interesting things. Yet they have received very little recognition for what in those days was a brave last-minute decision to visit China and, as Zhou Enlai said, to open the door to China. On the contrary, one of the players has told me how surprised they were when in 1972 the Chinese side was invited to make a return pingpong diplomacy visit to Sydney and they were not invited. Nor was I.

Instead, some in the group involved with the later Whitlam visit have given themselves the credit for the door-opening. True, for subsequent improvements in relations some of them have played a major role. But not for the initial breakthrough. Yet in the many books and articles about the history of Australia’s relations with China it is that Whitlam visit which is seen as the crucial breakthrough, with little or almost no mention of the earlier pingpong breakthrough. 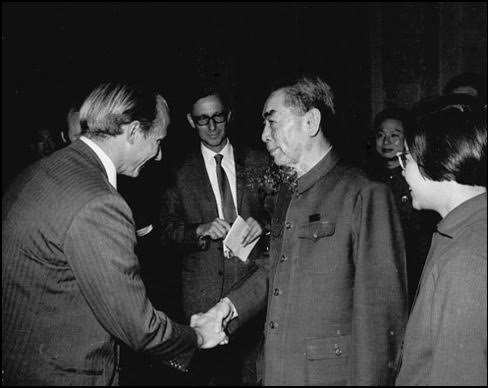