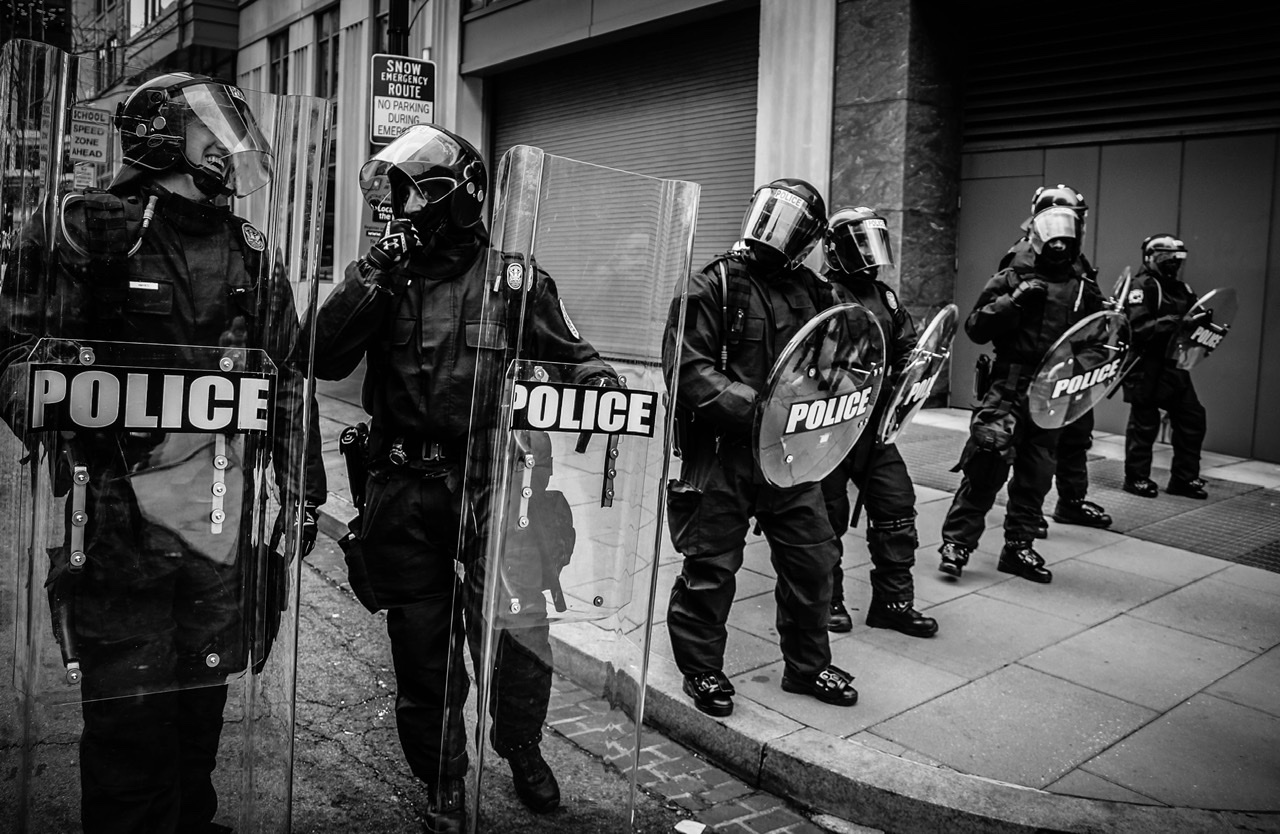 In an ideal world, war is declared but no-one turns up. In the same utopia, police forces refuse orders to arrest, torture and kill, but in Myanmar, Minsk, Moscow and Hong Kong, men in police uniforms are complying with orders.

If significant numbers of police refused to obey, dictatorships could not operate and left to gather in unguarded streets, protesters would have no-one to oppose.

Do the police forces in those countries have no choice?

As authoritarianism flourishes, references to state security become the justification for oppression, even democracies face the fatalism that the times favour suppression of dissent.

The ‘no choice’ question needs answers about police staffing, whether violence reflects already existing traits, whether it displays macho behaviour by men expecting and even enjoying suppression of other citizens. Are these ordinary men who have been socialized to act violently, or did they already display sociopathic tendencies before being recruited and trained?

Within police forces, the culture of oppressive regimes contributes to in-group solidarity. For example, police support for national socialism in the run-up to the Holocaust now appears matched by Hong Kong police supporting the Beijing regime against supporters of democracy.

Recruits receive jobs, income, status, perhaps relief from poverty. Their socialization produces polarization between us and them, between state interests and opponents even if the latter include members of the families of serving police.

Explanations of police compliance have been revealed in several studies. In 1950, Theodor Adorno identified The Authoritarian Personality, someone who displayed rigid adherence to conventional norms, aggressiveness to outgroups and little evidence of introspection, reflection, or creativity.

In 1983, in a simulated prison experiment, Philip Zimbardo divided a ‘normal’ homogenous sample into guards and prisoners. He made the distressing observation about the ease with which sadistic behaviour was elicited from groups who were not sadistic types.

In his 1974 study Obedience to Authority, Stanley Milgram’s testing of individuals’ ability to resist authority showed a deeply ingrained tendency to comply with those higher in a hierarchy. Two-thirds of Milgram’s subjects were obedient to the point of inflicting extreme pain.

Authority may be respected but why the conformity?

Educated during authoritarian regimes, the police may be subject to a barrage of insidious ideas: control or be controlled, stand firm against an enemy, stigmatize dissidents as unworthy and therefore as easy targets.

Within every social collective, a peer group usually exerts pressure on behaviour and sets moral standards. For example, as though there was an unchallengeable norm to admit what they had done and what they should talk about, members of a WWII German police battalion in occupied Poland would list how many Jews they had arrested and killed.

The influence of misogynous attitudes is apparent from reports about the conduct of police in Myanmar. Protesters have been stringing up women’s clothes on account of the tradition that walking beneath women’s apparel is considered bad luck for men. Videos on social media show police taking down lines of clothes before crossing them. Walking beneath garments designed to cover women’s private parts is considered not only bad luck but emasculating for men.

In police operations against protesters, a sense of macabre theatre prevails. Laden with the latest paraphernalia of modern warfare, Hong Kong police look like creatures from another world. In the US, military equipment for police forces is taken for granted, and Belarus police are permitted to use lethal weapons.

In Minsk and Moscow, the colour black dominates. Men with black belts and batons, in masks and balaclavas, drag protesters dressed in black to unmarked black vans.

Are These Ordinary Men?

Human beings can hide within uniforms. Dragooned into conformity, officially applauded for their loyalty to an authoritarian system, but never interviewed about their motives, they may appear to be unusual but could be ordinary men?

To address that question, I refer to Christopher Browning’s 1992 book Ordinary Men, a study of the operations of a German reserve police battalion in occupied Poland in the 1940s. As part of the ‘final solution’, these men participated in the murders of thousands of Jewish men, women, and children. Browning concluded, ‘Ultimately, the Holocaust took place because at the most basic level, individual human beings killed other human beings in large numbers over an extended period.’

Members of this police battalion were largely middle-aged family men of working and lower-middle-class background from Hamburg. Most were raw recruits with no previous experience of violent police operations. Although a few asked to be excused from murdering women and children, almost all carried out their orders to kill or deport Jewish inhabitants of Polish villages.

Brown the historian agreed with psychologists that evil arose out of ordinary thinking and was committed by ordinary people because ‘cruelty is social in its origin much more than it is characterological.’

The exception to the rule is the rare individual who resists authority and exerts moral autonomy, but Brown concluded that once the training and socialization of recruits took effect, ordinary people committed atrocities. Compliance with an initial command to murder Jews became routine and made killing progressively easier.

Focus on police culture must not conceal the well-staffed, efficient bureaucracies which make police operations possible. At best there are invisible administrators who may be unaware of the consequences of their paperwork. At worst, at least in Nazi Germany, there were desk murderers, the operatives who ensured that orders to kill and deport were given, that gas chamber trains ran on time.

In many countries, the bureaucratization of daily life sees thousands of administrators in unknown, inaccessible offices facilitating decisions about people’s lives, such staff protected by their invisibility, never held accountable for their actions.

We may look in dismay at events in Belarus, Hong Kong and Myanmar but could such behaviour happen in a supposed fair go, alleged human rights-respecting democracy?

Despite sustained public protest, refugees are contained on remote islands and to show macho politicians unwilling to bend, let alone respect the rules of international law, powerless people are told they’ll never be allowed to come to Australia.

In the same vein, for almost three years, a Tamil family including two little girls now five and three, remain in detention on remote Christmas Island. It is a bizarre exercise in which discretion which allows exception to the rule so seminal to policymaking is ignored so that government can display consistency and strength, their Christian convictions coupled to cruelty.

Only recently, and from a handful of Federal politicians, led by the principled Andrew Wilkie, has there been any opposition to the imprisonment of Australian citizen Julian Assange. Victimized and prosecuted for revealing mass murder by US forces, this courageous citizen shows the dangers of non-compliance. He faces the prospect of 175 years in a US maximum-security prison.

In response to Assange’s imprisonment, Australian establishment interests mouth respect for human rights but cooperate with vengeful US and UK justice systems.

On June 26, 2020, with encouragement from shock jock journalists on Sky News and Radio 2GB, forty Australian Federal police appeared at the home of NSW Labor MP Shaoquett Moselmane. Presumably, under orders from Minister Dutton and Attorney-General Porter, the police alerted the media about their plans and in shifts of twenty each, raided the politician’s home, traumatized members of his family yet informed Mr Moselmane that he was not suspected of any offence. They nevertheless trashed his reputation and forced his suspension from the Labor Party.

To date, there is no acknowledgement of wrongdoing by the police and no apology from the leader of the State Labor Party let alone from the radio, TV and print journalists who consider derision part of their trade.

Conditions that set the stage for police brutality in Belarus, Russia, Myanmar, and Hong Kong may appear to be extreme, but if these events show ordinary men thinking they have no choice but to comply with authority, violence and suppression could happen anywhere.

A culture that encourages surveillance and control also cultivates fear and recommends that compliance with those in power provides security, that it is best not to think let alone question authority. Once that view is accepted, so is the belief that ordinary Australians could never behave like the uniformed gangsters operating as violent police in other countries.