Porter allegations: Accusations fly of ‘trial by media’; AKA journalists doing their job

There was an outpouring of grief for the “trembling, tearful wrecks” of Cabinet Ministers forced on to sick leave, having to experience such ‘humiliating’ and ‘devastating’ claims. Some particularly callous commentary equated Porter’s life with that of the “ruined” life of the woman who died by suicide.

Christian Porter’s alleged rape of a 16-year-old in 1988 was the only topic on anyone’s lips. Predictably, the media protection racket went into overdrive.

Chris Uhlmann at Nine News and Paul Kelly at The Australian were concerned about a “trial by media”, even though that is essentially journalism, as noted by experts, including senior research fellow Denis Muller. As Muller wrote, the media did their job of being watchdogs.

Tom Percy, in The Sydney Morning Herald, reckoned the legal requirement of innocent until proven guilty had “surely, become reversed”. I wonder how that stacks up against data suggesting 3% of reported sexual assaults result in a conviction, while the vast majority of sexual violence is never reported to the police.

Aaron Patrick, for the Australian Financial Review, reckoned the minister’s silence was “dignified”, and that Sarah Hanson-Young was merely point-scoring on the basis of the minister being a privileged, white male.

It took Susie O’Brien at The Herald Sun (of all papers) to call for action.

After Attorney-General Christian Porter outed himself as the accused, the protection racket went into overdrive.

The Australian Financial Review parroted Porter’s idea that the rule of law would no longer exist if he should step down – a straw man argument, as the loudest calls have been made for the purposes of establishing an inquiry – as well as unchallengingly repeating his claim that the allegations had not been put to him by journalists.

This doesn’t stand up to scrutiny. At risk of using social media as a source of information, swathes of the media sought comment from the Attorney General, from Amber Schultz at Crikey, to Samantha Maiden at news.com.au, Neil Mitchell at 3AW and Kate McClymont at The Sydney Morning Herald.

Porter’s office then rowed back on the allegations. 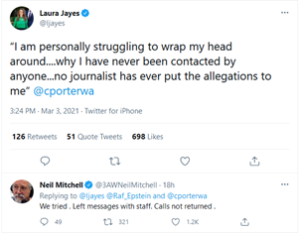 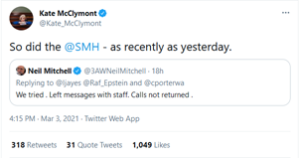 Elsewhere, the media seemed far more concerned with the state of Christian Porter than rape victims. Dennis Shanahan and Nicola Berkovic in The Australian were concerned about the “trembling, tearful wrecks forced on to sick leave” and the “cruel” effect of the allegation on Porter;

Rob Harris at The Sydney Morning Herald seemed particularly callous, equating the complainant’s “ruined” life with Porter’s. One person was allegedly raped and died by suicide 30 years later. The alleged perpetrator will face no criminal investigation, but may have to stand down and move into a cushy consultancy job. Hardly apples and apples.

Jennifer Hewett at the Australian Financial Review lamented the “strained, emotional” Attorney General, seemingly attempting to drum up sympathy for the “humiliating” and “devastating” claims. She didn’t care to challenge Porter’s claims that Bill Shorten, when accused of rape in 2014, did not undergo trial by media.

Samantha Maiden, however, pointed out that that story made the front page of the The Australian. Whoops.

had some harder-hitting commentary, pointing out the failings of Morrison’s response. Preparing the ground for a leadership challenge?

Chris Kenny at Sky News went so far as to compare the coverage to the Salem Witch trials, but Porter’s press conference didn’t merit an appearance on any of Sky’s social media.