Privatisation and the hollowing out of Medicare by the Morrison Government 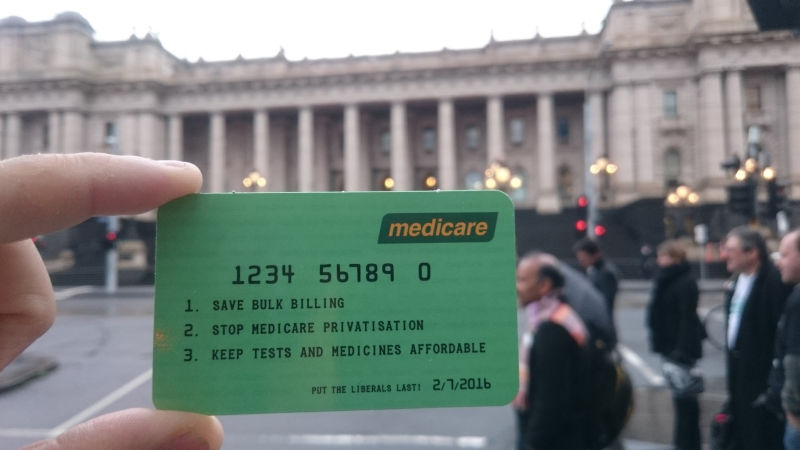 The Coalition has for years been undermining Medicare. Bob Hawke was correct at the last election when he said that the Coalition was aiming to privatise Medicare. It was not a scare tactic as some unthinking journalists keep saying. The Coalition has been privatising by stealth for years our universal health care system.

The Minister for Health if the Coalition is returned has told us that Medicare is unsustainable without more co payments and an end to bulk billing.

She is mistaken. Medicare is sustainable with proper management. Our health costs are half those of the US where private health insurance is rampant.

The erosion of Medicare started two decades with John Howard. One vehicle for this erosion is PHI with a $13 billion p.a. taxpayer funded subsidy to  private health insurance companies. Another vehicle is a steady increase in ‘out of pocket expenses’ to almost 20% of total health funding.

We are steadily moving down the disastrous US path of PHI with its horrific costs and unfairness. Warren Buffet has described PHI in the US as the ‘tapeworm in the US health system’.

PHI  is also eating away in Medicare

The threat takes many forms.

People who should know better tell us that the PHI subsidy is costing only $7 billion p.a. But they are telling us only half the story. In addition to the direct subsidy, there is another $6 to $7 billion p.a. subsidy through tax concessions to high income earners to encourage them to take out PHI. The $13 plus billion p.a. subsidy to PHI is almost twice the funding necessary to include dental care within Medicare.

The $13 billion subsidy for PHI undermines Medicare’s principles of a single funder, universality and solidarity. The PHI subsidy goes overwhelmingly to people on higher incomes. PHI enables the wealthy to jump the hospital queue regardless of need.

The administrative costs of PHI are three times those of Medicare. These costs may be off the Commonwealth budget, but the inefficiency of PHI is still borne by policy holders. PHI companies impose their own private tax. It is called ‘premiums’.PHI premium increases have been at double the CPI rate for the last 20 years.

A political justification by the Coalition for the $13 billion subsidy for PHI is that it takes pressure off public hospitals. It has not done so. In fact, the reverse has occurred. Because of the weakening of Medicare’s ability to control costs and fees, many people on moderate incomes have been forced to go to the emergency departments of public hospitals. Most of these emergency departments have been at bursting point for years. PHI has also under-written dramatic increases in salaries of specialists with the result that increasingly, clinicians in public hospitals are attracted to taking employment in private hospitals where the salaries are three to five times higher than in public hospitals. This is just another example of how PHI is hollowing out Medicare and the public system from within.

As Ross Gittins has put it, ‘PHI is a scam” It is designed to hollow out Medicare.If people want private health insurance they should not expect a government subsidy.

Out of pocket expenses

The second way that Medicare is being eroded is through making patients ,regardless of income pay more for health services. This is a special problem with private specialist fees. I have no problem with reasonable private contributions to health costs but the problem is now out of hand.The basic principle of Medicare is its universality. That principle is being seriously eroded by unreasonable out-of-pocket expenses which patients now pay and which represents about 20% of total health funding. That is almost double the government subsidy to PHI. This is a very clear eroding of eroding the principle of universality in Medicare. The shell of Medicare is being retained whilst it is eroded from within by rapidly increasing out of pocket expenses.

Medicare should not be just about how we fund existing systems of healthcare. The way we deliver healthcare must be reformed but Coalition Governments have avoided the issue

The following are some examples of how we need to reform the delivery of health services. The Coalition has avoided everyone of them.

First, fee-for-service by doctors promotes an excessive volume of services (turn style medicine!). The financial incentive is all wrong . The incentive must be to keep people healthy. FFS may be appropriate for ‘episodic care’ but we need to move to salaries, contracts and per capita payments to general practitioners for quality long-term patient care to keep people healthy.

Third, we must reduce pressure on hospitals by encouraging much greater delivery of health services outside hospitals. Hospitals should be the last resort rather than the first resort. Denmark is showing the way. In 2007 there were 40 hospitals in Denmark. By 2016 there were 21. As many health services as possible were provided through primary healthcare, health centres and outpatient clinics. Hospital admissions were reserved for the acutely sick, providing them with highly specialised services. The major health reform we need is in primary care and GP services in particular to keep people out of hospitals. Denmark is a good guide. I don’t think the Coalition has even thought of this.

Fifth, prevention services have been grossly underfunded and we saw the dire consequences in the Covid epidemic under the Morrison Government.

Sixth, the blame game between the Commonwealth and the States is ignored. State hospitals are under continual pressure because Commonwealth funded general practise is failing in many respects to provide appropriate care in the community.

The forms and externals of Medicare -the shell-may remain but it’s founding principles-fairness, universality, solidarity and efficiency are being whittled away or not addressed.

The Coalition has a clear record and pattern in dealing with organisations like Medicare.

First, if politically possible, it will fully privatise. This happened with Telstra. We now have a low speed and costly NBN

Second, privatise by stealth if there are likely to be political headwinds. eg Medicare and the ABC

Third ,contract out as many public activities as possible to friendly mates in the private sector.

Medicare, our universal health system for everyone is being steadily eroded and privatised. It is part of a conservative agenda in numerous fields.

To paraphrase Warren Buffett, PHI is a tapeworm within Medicare. It will lead to a two tier health system.