Productivity – maybe one good aspect of the Morrison-Frydenberg budget

Low interest rates and breaks for new investment will not encourage business expansion – there’s too much uncertainty – but they may lift our productivity.

There has probably never been a better time for firms to borrow to invest. Interest rates are low and the budget has a temporary provision for companies to write off the full value of otherwise depreciable assets. Treasurer Frydenberg, referring to the instant write-off measure in his budget speech, said “It will dramatically expand the productive capacity of the nation and create tens of thousands of jobs”.

Maybe it will expand the productive capacity of the nation – no bad thing in light of our dismal productivity performance over the last few years (well before the pandemic hit), but will it create thousands of jobs?

Obviously the government would like to see firms investing to expand their businesses into new markets or to develop new products, creating more employment.

That is unlikely, but they may invest in ways to cut costs and could be cutting employment.

We are in a time of great uncertainty, particularly about the coronavirus. Will there be another outbreak; if there is another outbreak how will the public and authorities react; will there be a vaccine; when might it come; will Australians’ experience of the virus result in long-term behaviour change (e.g shifting economic activity to the suburbs); what will happen in the rest of the world?

Even before the pandemic broke out, firms weren’t investing, in spite of the lure of low interest rates. Companies were profitable, but they were handing most of those profits back to shareholders as buybacks and generous dividends. Historically most established firms used to retain about half their profits for investment, paying out the other half as dividends, but in recent times the dividend payout has been more in the order of seventy per cent. (That, is after executives and board members have taken more than their fair share of profits.)

Now we have not only the uncertainty of the pandemic and its consequences; we have also the certainty of low immigration. For the last 75 years Australian businesspeople could always count on immigration to provide an expanding market, but that assured market growth has dried up. There is also the certainty, so long as Frydenberg’s “trickle-down” economic policy endures, that people on low incomes are not going to have much money for discretionary spending. Both Karl Marx and Henry Ford understood that without a well-paid workforce capitalism could not thrive, but that realisation seems to be beyond the capacity of the present government.

And even if an effective vaccine is distributed next year, as envisaged in the budget, there will still be two uncertainties related to climate change. One uncertainty is about the effects of climate change, most notably bushfires and floods, and also less dramatic diffuse effects, such as changes in settlement patterns as parts of Australia become less suitable places to live and do business. The other climate-related uncertainty relates to government policy. Our present energy policy is hostage to the short-term greed of the well-established fossil fuel industry and to the political intransigence and idiocy of climate-change deniers with leveraged influence in our major political parties. Something has to give at some time – our country cannot stay out of step with other “developed” countries forever – but no one has a clue how the situation will play out.

Even if firms do not invest in expansion, there is always the less risky option of investing to achieve cost-reduction, and that often means investment in labour-saving technology.

Many on the “right” believe that low minimum wages can hold off such investment, which involves job losses. John Howard, for example, publicly bemoaned the passing of “dead-end” jobs. It’s a dismal attitude, for it rests on the idea that people are limited in their abilities, contrasting with the more expansive view articulated by Amartya Sen that most people have vast reserves of untapped capabilities. The Howard view is also unrealistic, because much investment in new technology is done to improve product quality, reliability and safety. Labour-displacement is often a consequence, but labour costs are not the prime drivers of such investment.

Some claiming to be on the “left” seek protection of jobs – traditionally through tariff protection, and sometimes through regulation to impede new investment. (Recall the union opposition to driverless trains.) In sharing Howard’s dismal vision they forget that three centuries of labour-saving technologies have helped lift humans out of poverty and the drudge of grunt work. As Keating said of the reforms in the 1980s, “did we ever hurt anybody liberating them from the car assembly line? When they left the car assembly line and got a more interesting job in the economy, did we do them a disservice? Of course we didn’t”.

Productivity is almost everything

Paul Krugman said “productivity isn’t everything, but in the long run it is almost everything. A country’s ability to improve its standard of living over time depends almost entirely on its ability to raise its output per worker”.

Australia’s labour productivity is unimpressive: its decline since 2013 has been particularly sharp.  The graph below takes up to 2018-19. (Data covering the period of the coronavirus is virtually meaningless because of conceptual issues around “hours worked” when there are measures such as “Jobkeeper” in place.) 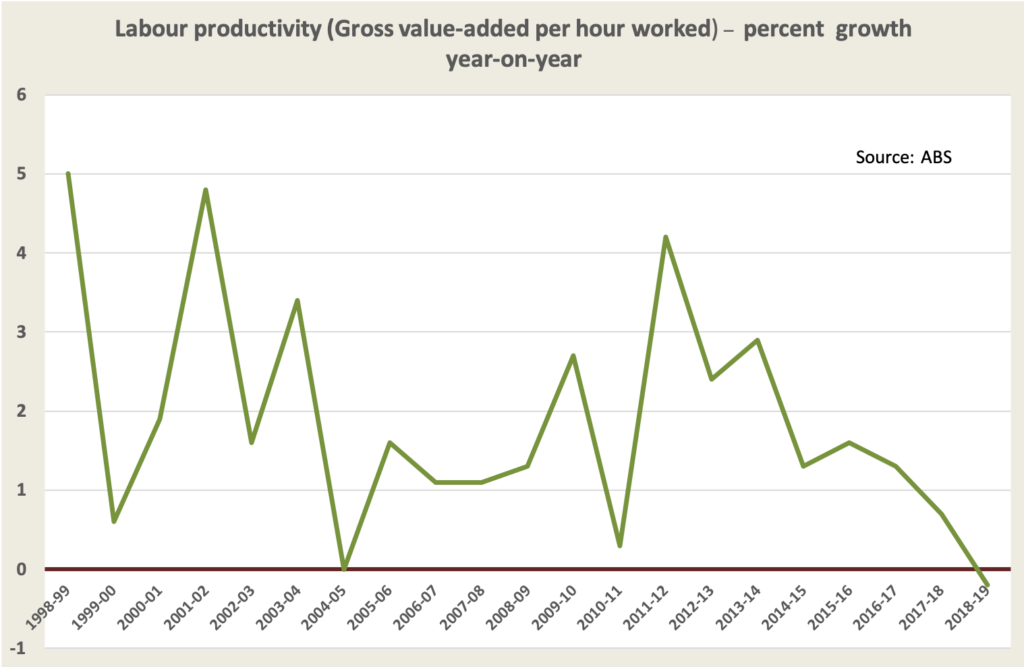 If low interest rates and instant asset write-off result in some turnaround in our labour productivity, that is surely a good thing – one beneficial outcome from what has been an otherwise poorly-designed budget shaped by a government short of economic ability.

Such investment isn’t going to create jobs, however. Its immediate consequence could be less employment.

Some economists would claim that because improved productivity increases prosperity, in time employment emerges as people realise we need fewer assembly-line workers and more logistics experts, and that markets will sort it all out. But that process, left to its own dynamics, takes a long time.

Unless there are strong and practical labour-market programs to help people adjust, the ranks of the unemployed and under-employed will rise, and so too will resentment.  That is one way economy-wrecking political movements arise, such as Britain’s Brexit movement.  When Keating made his remark about “liberating” people from the assembly line, he realised that those “more interesting” jobs had to be available, and that people should be helped through retraining to fill them.

Also, there has to be some re-balancing between the private and public sectors.  As the economist William Baumol pointed out, displacement of labour with capital has been most pronounced in the private sector, in industries such as manufacturing, transport and construction, whereas many intrinsically labour-intensive activities, such as teaching, health care and, policing, are in the public sector, and will necessarily stay in the public sector because of market failures or community choices about what services are to be shared and what are to be left to the market.  Much work involving face-to-face human services, will remain labour-intensive.

That is why in most “developed” countries there has been a relative growth in the public sector, particularly in areas of direct service delivery – which, in Australia’s case, are largely the responsibility of state governments. But our national government is fixated on the ideology of “small government”. It is spending heavily, but that spending is being directed as cash or near-cash transfers to individuals and corporations. It is not directed to spending on government services.

An economic policy aimed at improving our productivity while increasing employment would include support for re-training, and an expanded role for government, particularly state governments who deliver human services. The Morrison-Frydenberg economic policy fails on both counts.