A culture of corruption is engulfing the Morrison government 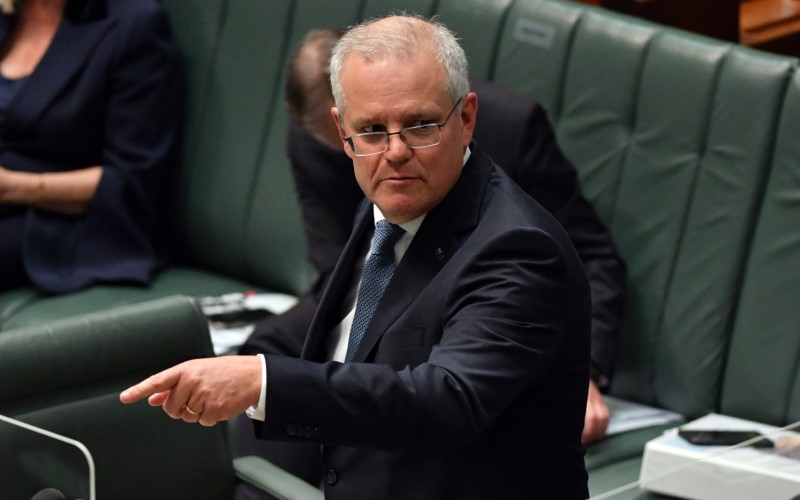 The Morrison government has corrupted the idea of democratic government itself by undermining of political institutions.

A culture of corruption is engulfing the Morrison government. It’s not just the endless graft and largesse – the million-dollar contracts to Liberal linked companies, the generously (mis)allocated ‘grants’ to Coalition seats, the personal sinecures to retiring party faithful, the cruel illegality of Robodebt – we’ve become inured to all that, this is a corruption of the idea of democratic government itself. It is insidious, pervasive, and in its undermining of political institutions, dangerous.

It can be seen in the government’s disdain for accountability, its retreat from transparency and truthfulness even to the parliament, and its renunciation of basic ethical standards, a collective abrogation of Westminster democratic government. Parliament reserves its greatest censure for those who mislead it, for failing to speak the truth within it, and with good reason. This is the cornerstone of political accountability, the nexus between the electors and the elected, and the critical means through which we hold governments to account. It’s why question time is such a critical part of the parliamentary process and why misleading parliament really matters. Or ought to matter. Without it, there can be no electoral oversight, we cannot know what a government is doing if it lies to the parliament, and to us, about it. Speaking the truth is not just an ethical expectation, it is a democratic imperative.

Scott Morrison’s ‘mistruths’, as Dennis Atkins noted, ‘transcend the usual’ in his disarming capacity to deny even his own words. With Anthony Albanese’s release of Labor’s widely praised electric vehicle targets Morrison quickly jumped on board, claiming to support EV targets and denying that he had previously ridiculed the technology. Even when confronted with his comments during the 2019 election campaign that electric vehicles would ‘end the weekend’, and that ‘it’s not going to tow your trailer, it’s not going to tow your boat’, he simply denied it. ‘I didn’t ridicule that technology, that’s good technology’.

Morrison’s coldly transactional, ‘spoils for the victor’ approach to government was cemented after his ‘miracle’ victory, as government became a means of rewarding supporters and donors with little thought to policy needs beyond that self-interested coterie. Urgent policy matters demanding national leadership and action — climate change, bush fires, pandemics — are inconveniences to be dealt with politically, if at all.

Nowhere is the dire implication of that lazy, incompetent, politics clearer than in the disastrous mishandling of the vaccine roll-out, the one policy matter the prime minister had insisted on taking full federal responsibility for. The folly of the government’s over-reliance on the AstraZeneca vaccine has now escalated into a public health disaster. Falsely claiming delays, EU blocks and supply issues, the problem of insufficient vaccines has been compounded as AstraZeneca is no longer advised for people under 50, leaving millions of Australians with no immediate prospect of vaccination.

The prime minister had set his course to a comfortable early election, envisaging a wave of successful vaccinations and economic renewal and with COVID-19 finally in retreat. Is it really only six weeks since the Murdoch minions were dusting off their predictable ‘Labor’s leadership woes’ and ‘Albo’s got to go’ mantras, smoothing the waters for ScoMo’s triumphant electoral return?

None of them reckoned on the explosive effects of former coalition staffer Brittany Higgins’s brave decision to speak out about her alleged rape two years ago by a coalition staffer in the office of Senator Linda Reynolds. Ms Higgins’ courage in speaking out prompted other women to come forward, and they did.

The former attorney-general, Christian Porter, faces a serious allegation of the rape of a teenager 33 years ago, and has launched defamation proceedings against the ABC for reporting the allegations; Senator Linda Reynolds has been condemned for apparently failing to alert the prime minister to Brittany Higgins’ alleged assault and for later calling Higgins a ‘lying cow’; NSW Nationals member Michael Johnsen has admitted to sexting a sex-worker during a parliamentary debate and inviting her to parliament house, and also faces an allegation of rape; a Liberal staffer photographed himself engaging in ‘a solo sex act’ on the desk of a female MP; Coalition members including former ministers have been accused of engaging sex workers inside parliament house and of using the prayer room for sexual encounters. The extent of the sexual dereliction revealed in coalition ranks is simply horrific.

Caught in this slipstream Morrison did what he always does when cornered, he announced another inquiry. In fact, he announced five. The Gaetjens inquiry into what Morrison’s staff knew about Higgins’ allegation shows the sophistry behind this favoured response to political crises. Morrison told parliament on 18 March 2021 that the inquiry, led by the secretary of his own department of Prime Minister and Cabinet, Phil Gaetjens, was in progress and that he was yet to be updated on its completion date. The following week Gaetjens told Senate estimates that the inquiry had been ‘paused’ on 9 March, and that Morrison had been advised of this on the same day.

In this single exchange, the prime minister had not only blatantly misled parliament, he had also exposed his use of inquiries as their very opposite, as a cynical exercise in political containment. By citing an ongoing inquiry, Morrison routinely refuses to answer questions from journalists, constituents, even in the parliament, while the inquiry itself is quietly ‘paused’ perhaps never to begin at all. Much as the putative NSW police inquiry into the allegations against Porter was closed before it even began.

The government is now beset by twin disasters, first is the daily retinue of sexual miscreants within the coalition, each so deplorable that it quickly obscures what has gone before, and second is the Prime Minister’s attempts to deal with the first. It’s difficult to know which of those is worse – the intractable problems of male privilege, debasement and dominance in the Liberal party, or Morrison’s efforts to cauterise them. Every one of these allegations against government members has been exacerbated by Morrison’s failures of leadership, and in particular his refusal to act against them.

Morrison did not remove the underwear-photographing bully, stalker and harasser of female political opponents, Andrew Laming, from the government party room  reprising his standard refrain of Prime Ministerial political impotence and claiming to have ‘no control’ over decisions of the Queensland LNP. Laming was sanctioned instead with a few hours of ‘empathy training’, while on fully paid medical leave. He also remains chair of the House of Representatives standing committee on employment, education and training, which gives him an 11% increase in salary on top of his backbencher’s salary of more than $200,000, despite his acknowledged indiscretions.

Morrison also refused to stand down Christian Porter or to hold an inquiry into the claims against him and declared Porter to be ‘an innocent man’, despite not having read the substantial dossier containing the untested allegations against him. Porter remains in the cabinet with a new portfolio, as does Linda Reynolds.

Finally, in an abject failure of leadership, Morrison declined to speak to the thousands of women in the March4justice gathered outside parliament house demanding action on the (mis)treatment of women in parliament and beyond. One hundred thousand people, mostly women, marched in cities across Australia that day, and the Prime Minister refused to step outside and speak to them. If they wanted to speak to him, then a select group had to come to him. He would speak to them on his terms, or not at all. The silencing of women writ small. Morrison understood neither the issue nor the significance of that moment, and a remarkable opportunity for change was lost.

Morrison blithely presented this tableau of inaction as action, announcing a cabinet reshuffle that promised ‘a swathe of changes’. In this tawdry ‘pea and thimble’ trick, the sum total of changes to cabinet was a single new addition to it, Melissa Price. The cynicism was so brazen, it was comical. Did he really imagine that the announcement of lots of women heading lots of ministries for lots of things to do with women, and with Marise Payne as the ‘Prime Minister for women’, could do anything other than reinforce the fact that women ordinarily have no part to play in this gender dysfunctional government? The effects of this groundswell of agitation for change are already being felt, with the most recent opinion polls showing a sharp turn, particularly in the female vote, against the government.

Labor now consistently leads the Coalition in 2 party preferred vote at 52:48 in both NewsPoll and Essential polls. And as the electorate turned and with trust in the Coalition eroding, News Corp swung into action in a concerted effort to convince us that first, there was no problem just a lot of noisy women with no clear agenda, and second that Morrison was dealing with it, whatever it was. In a dazzling display of condescension even by their standards, an array of The Australian’s finest then presumed to tell women what they are doing wrong and what they should be asking for in order to really achieve ‘change’ – as defined by them and as acceptable to them: ‘Plenty of anger but surprisingly few ideas’, ‘outrages rather than solutions’, ‘tantrums’, ‘sanctimonious grandstanding’, ‘hysteria’ – you get the drift.

Despite the hyperbole, every member of the previous cabinet remains in the newly refurbished cabinet including the most tarnished ministers Christian Porter and Linda Reynolds, and Andrew Laming remains on the government benches. These ‘Honourable Members’ are a daily reminder of Morrison’s disregard for the treatment of women and each of them a beacon for further revelations that will haunt the government until election day.  Laming is now the subject of an Electoral Commission inquiry into his undisclosed and unauthorised use of more than 30 facebook pages for political purposes.

This is just the start of what will be a running sore for the government, an electoral liability of its own making.  Impervious to the demands for accountability, Scott Morrison has left the toxic heart of the government in place, and he will pay the political price for that appalling misjudgement.