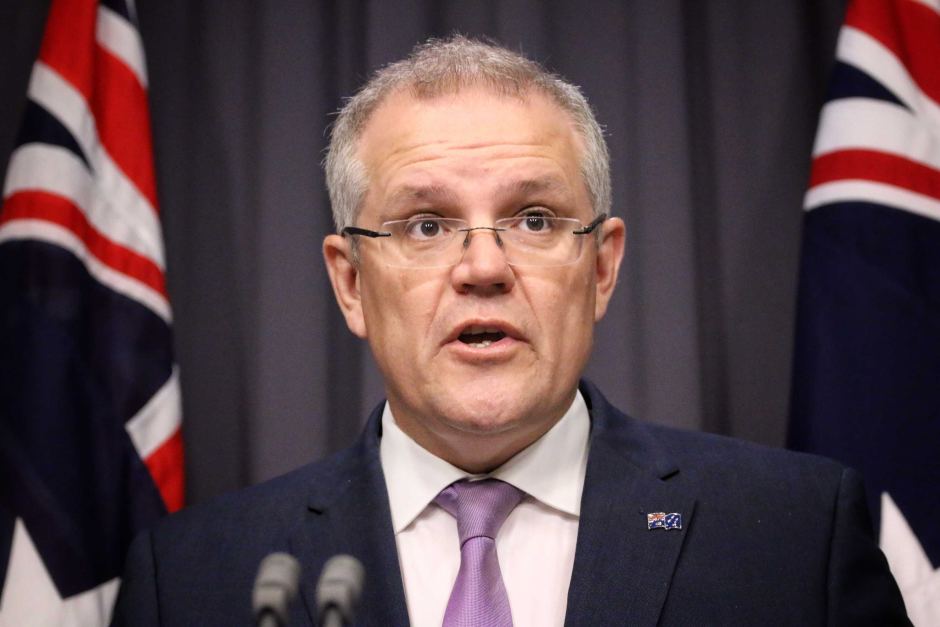 Scott Morrison’s prime ministership began with a brazen betrayal, perfectly captured in the image of a beaming Morrison, arm slung around the shoulders of embattled Prime Minister Malcolm Turnbull declaring ‘this is my leader. I’m ambitious for him!’. Like every step along the Prime Minister’s political path it was entirely contrived, a matey display of faux fealty, friendship and political protection. Two days later, Malcolm Turnbull’s political career was over, and Scott Morrison stood in his place. It reads now as the defining image of his Prime Ministership – duplicitous, disloyal, and self-serving.

If nothing else (which could just be the case) Scott Morrison is a product, an expertly managed political construction – ‘ScoMo’ – with a series of photo ops and slogans where a political agenda ought to be. Above all, Morrison is a ‘control freak’ and a renowned micro-manager, which only makes the spectacular unravelling of his government all the more remarkable.

Just three weeks ago the Prime Minister’s political trajectory which had been meticulously planned for months was primed and ready to go, with all roads leading to an early election. Despite his insistence that he’s a ‘full-termer’, Morrison’s road map to another ‘miracle’ (NewsCorp/Clive Palmer) electoral victory was clear: claim credit for Australia’s world-leading management of the Covid pandemic, oversee the national roll-out of vaccines, increase JobSeeker (barely), watch the economy start to bounce back, award a bewildering array of ‘grants’ to marginal seats, and give tax cuts in the May budget.

It began in earnest with the vaccine roll-out, the Prime Minister being one of the first to be vaccinated, wearing an ‘Australian flag-themed face mask’ alongside 84 year old nursing home resident Jane Malysiak. Encouraged to give the ‘V’ sign – for victory or vaccine or both? – Jane Malysiak’s visibly pained fingers spontaneously turned around to give Scott Morrison a very public ‘bird’, thereby photo-bombing his own photo op. And it’s been down-hill ever since.

Just two days later former Liberal party staffer, media advisor Brittany Higgins, stated that she had been raped by another Liberal staffer in the office of her boss, the Defence Minister, Linda Reynolds, in 2019 just weeks before the federal election. Morrison’s response to this shocking claim of sexual assault involving his own government’s ministerial staff was wildly inadequate and increasingly unbelievable. From his claim that Reynolds had failed to inform him of this alleged criminal offence for nearly two years, to his reference to his daughters and wife ‘Jen’ as having to guide his view of its enormity, his repeated references to the alleged victim as ‘Brittany’ and not ‘Ms Higgins’, and his failure to take any action against Reynolds whom he nevertheless described in parliament as having ‘disappointed’ him, Morrison appeared more intent on distancing himself and his government from the furore than addressing the urgent issue of predatory sexual behaviour within his own party and its staffers at the heart of it.

Within a week three other women had come forward alleging that they too had been sexually assaulted by the same Liberal staffer. The government’s focus on secrecy and damage control where it should have taken action placed other women in danger and left the alleged perpetrator unchallenged. Although he was dismissed within days of the incident, purportedly for a security breach, the alleged perpetrator was later able to enter Parliament House as a lobbyist, signed onto the lobbyist register by the office of the Attorney-General, Christian Porter.

By the end of that disastrous week it was apparent that Morrison’s own office staff as well as other government members had all known about Brittany Higgins’ reported assault – Michaelia Cash, Scott Ryan, Tony Smith, and later Peter Dutton who had been briefed by the Federal Police commissioner Reece Kershaw himself – yet Morrison still insisted that he had not been informed. For a micro-managing political martinet it was as Malcolm Turnbull described, ‘inconceivable’.

Even when Minister Linda Reynolds called Brittany Higgins, who had courageously come forward to allege that she had been raped in the minister’s office, a ‘lying cow’ (a breathtaking calumny) Morrison took no action. Instead, Linda Reynolds checked into hospital ‘as a precaution’ on the very morning of a much anticipated and doubtless intense address to the National Press Club. Reynolds has since had to apologise and pay compensation to Higgins for ‘hurt and distress’ caused by her remarks in a confidential settlement. Her ‘precautionary’ medical leave continues now for a third week and into the next parliamentary sitting, neatly avoiding the dangerous currents of question time. The alleged perpetrator meanwhile had likewise checked himself into a private clinic.

If, as Morrison continues to claim, neither his ministers nor his own staffers thought an alleged rape in the ministerial offices just weeks before an election, which the security officers on duty that night were concerned and distressed about, was sufficiently significant to inform the Prime Minister, that can only indicate the bargain basement level of concern Morrison himself exuded for such matters. No-one came forward to tell him because no-one thought it mattered to the Prime Minister. Just ponder that shocking fact.

Into this void of political leadership and moral responsibility stepped the Attorney-General, Christian Porter – the nation’s first law officer, protector of the rule of law, upholder of accountability, transparency and integrity. The report by ABC 4 Corners of an alleged sexual assault of a child by a then 17 year old Christian Porter in Sydney 33 years ago shocked even the most hardened political commentators. It followed the anonymous receipt by several politicians including the Prime Minister of a 31 page dossier setting out the details of the claim the previous week. He did not read it and nor did the Attorney-General and yet both have categorically denied the allegations within it.

Crises are inevitable in politics. The critical test for a government is not the crisis, it’s how it is dealt with. And in dealing with the crisis surrounding Christian Porter, and in particular his suitability for ministerial office, the government has failed completely and irrevocably. It has faced earlier crises – the bushfires and the pandemic are just two – for which Morrison had perfected a supercilious response of blokey, jokey, deflection and denied responsibility, best seen in his ‘I don’t hold a hose’ quip about taking a family holiday in Hawaii during the bushfires. It was risky strategy and yet it had worked, so far. Morrison’s grave political mistake was to think that it would work again, his failure to recognise the dire political and ethical dimensions of this devastating allegation. This was not the payment of millions of dollars for over-valued land, the rorting of unknown ‘grants’, or repeated marginal seat largesse, this was an allegation of the vicious rape of a child against the Attorney-General, Christian Porter, the nation’s first law officer, and no amount of political spin could make this one go away.

From the outset with the allegation against Porter, undoubtedly the most serious political crisis the government has faced, the Prime Minister profoundly miscalculated by attempting to reprise this same mode of deflection. ‘I’m not the Police Commissioner’, he snapped at journalists when the need for an inquiry into the Attorney-General became clear. It became clear for the simple reason that there has been no inquiry into those allegations.

Despite Morrison and Porter’s insistence that the police investigation had been closed, it had never begun. And that is the Prime Minister’s wicked problem. If a police inquiry had been conducted, admissible evidence taken, and then closed with no available basis for prosecution, then that could validly be the end of the matter. However it was not and so it cannot be.

The complainant had lodged acomplaint with the NSW police in 2019 along with a lengthy statement prepared in conjunction with her lawyer and other documentation, including the details of several people who were willing to be contacted for further inquiries by the police. However, for reasons which are not entirely clear, nothing of substance was done by NSW police in relation to the matters contained in the dossier. A file was opened and there it ended. Although they proposed establishing a task-force to deal with it, no inquiries were undertaken, those contacts were not spoken to, and a sworn statement from the complainant was never taken. NSW police spoke to her several times in June 2020 before she withdrew her action. The following day she took her own life.

It is essential to note, since this has been widely misrepresented, that the complainant did not withdraw her allegation of sexual assault. ABC Insiders quite disgracefully repeated that ‘the woman withdrew her allegations’ which is totally incorrect. At no stage were the allegations withdrawn, the complainant withdrew her police action, which is a very different thing. Nor was the police inquiry conducted and concluded as Porter suggested during his press statement. Porter said that he had ‘waited for the police to conduct and conclude the process that they apparently had on foot’. This is a sophistry since there had been no police investigation. The process had never begun beyond the opening of a file.

Porter’s comments that if he stood aside as Attorney-General ‘there would be no rule of law left to protect in this country’, only heightened the growing concerns particularly among the legal community over his use of this fundamental principle as a ‘shield for the powerful’. Porter is now on indefinite medical leave. It is precisely because of the lack of any inquiry into the claims that the matter remains untested and invidious for the Prime Minister and for Porter. Their insistence that to hold an independent inquiry would in any way breach the rule of law is a startling misstatement of that fundamental notion and an affront to it. No-one is suggesting such an inquiry can serve the purpose of a quasi-criminal finding, however it can and must focus on the urgent questions of ministerial standards and fitness for office.

The former solicitor-general, Justin Gleeson SC, has noted that; ‘processes of administrative inquiry into allegations of misconduct are widely available as a matter of law. The administrative inquiry cannot determine criminal guilt. Instead its focus usually will be on whether they are fit and proper to continue in the role they hold’. Without such an inquiry there is‘a legal vacuum consuming the office of Attorney-General’. The situation for the Attorney-General, the government and the Australian public, is simply untenable.

The realpolitik of this extraordinary series of events is that Scott Morrison has, for the first time, lost control of the political agenda. His tightly managed election strategy has comprehensively derailed, the government’s credibility is shredded, and the intractable problem remains of the Attorney-General facing a shocking allegation, untested and unchallenged, at the head of the administration of justice.

If a week’s a long time in politics, and it is, then these three disturbing and distressing weeks have been a political lifetime from which the Morrison government may never recover.