Quad Hypocrisy on the Law of the Sea 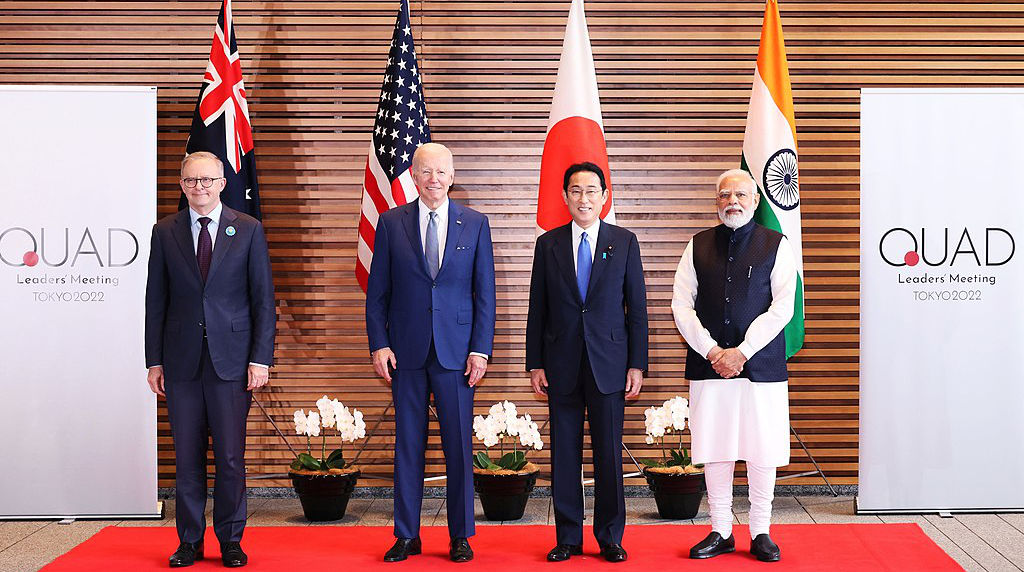 The point is that the Quad’s pious rhetoric supporting the international order and the Law of the Sea just a public diplomacy campaign to obfuscate the reality. Image: Wikimedia Commons

The Quad’s statements regarding upholding the “international order” are hugely hypocritical when it come to the Law of the Sea.

The 24 May meeting in Tokyo of the leaders of the U.S., Australia, India and Japan [the Quad] regurgitated the paean to the ‘international rules based order’. In particular they proclaimed that they “will champion adherence to _ the UN Convention on the Law of the Sea (UNCLOS)_ _”. This is a veiled criticism of China’s refusal to abide by an arbitration decision under UNCLOS auspices that invalidated its historic claim in the South China Sea. But these statements are hugely hypocritical.

The Indo-Pacific is mostly maritime in nature –the Pacific and Indian Oceans and the China Seas. The foundation for the maritime international order is UNCLOS. But all members of the Quad continue to violate it. The most egregious violator is the leader of the Quad—the U.S..

At least China has ratified the Treaty. The U.S.– alone among maritime powers– continues to refuse to ratify this foundation of international order at sea that it proselytises and tries to enforce . It thus wilfully remains outside this pillar of “international order”,. Yet it continues to unilaterally interpret to its advantage some of the Treaty’s key provisions relevant to freedom of navigation like “other internationally lawful uses of the sea”, “marine scientific research”, “abuse of rights”, ”due regard”, and “peaceful use/purpose”. Worse, it then backs up its interpretations with gunboat diplomacy by challenging others’ claims with threat of use of force aka Freedom of Navigation Operations (FONOPs).

But it is not alone in its hypocrisy.

Indeed not to be outdone by proselytising US officials, India’s Defence Minister Rajnath Singh asserted that “India, being a responsible maritime power, has a clear interest to create a rules-based peaceful and stable environment.”

But India violates UNCLOS as much or more than China. Similar to China’ prior permission regime for warships to enter its territorial sea, it requires a prior notification.

Although both exceed the limits of UNCLOS, India’s EEZ regime is much stricter than that of China. Here the US hypocrisy deepens. In April 2021, India protested a U.S. FONOP in its EEZ near the Lakshadweep Islands. The U.S said it had conducted the FONOP to challenge India’s “excessive” maritime claims. India reiterated its position that “UNCLOS does not authorise other states to carry out in the EEZ and on the continental shelf. Military exercises or maneuvers, in particular those involving the use of weapons or explosives”.

Then there is Japan and its multiple violations of UNCLOS. Perhaps the most egregious is its claim that a 10 meter square rock about 1100 miles from Japan’s nearest land–Okinotorishima—is a legal island that is entitled to a 200 nautical mile (nm) EEZ and continental shelf out to 350 nm. Asserting this claim, Japan even arrested a Taiwanese fishing boat and crew for operating in its claimed EEZ. Both the U.S. and China have opposed this ridiculous claim.

Moreover, according to the US State Department, in general “the coastal geography of the Japanese islands along which [its] straight baselines have been drawn do not appear to conform to the requirements called for by UNCLOS”.

Finally Australia’s claims to an EEZ and extended continental shelf around rocks like McDonald and Lord Howe are not compatible with UNCLOS as well as the legal definition of “rock” generated by the arbitration panel that denied China’s claims in the South China Sea. Ironically Australia supported this decision.

The point is that the Quad’s pious rhetoric supporting the international order and the Law of the Sea just a public diplomacy campaign to obfuscate the reality that the ‘international order’ is in the eye of the beholder—and the one with the most military might.