Desperate to create jobs in a COVID-19 recovery strategy NSW is preparing to green light 24 so-called “shovel ready” infrastructure and property development projects. In less contentious cases this can be done by authorising quantity surveyors and probity officers to sign off on the accuracy of the development proponent’s stated compliance with planning and environmental regulations.

But NSW Planning and Public Spaces Minister Rob Stokes, who is the consent authority for Snowy 2.0, the biggest energy project ever to be undertaken in Australia, told me: “It is important to recognise that the assessment process is accelerated, not changed. There is no change to the environmental approvals required.”

Snowy 2.0 is now contentious because of the weight of expert objection to its claimed cost-effectiveness as a renewable energy source and the massive collateral environmental damage to an alpine national park which is supposed to be inviolate and protected by state legislation.

Mr Stokes, the Premier Gladys Berejiklian, state Environment and Energy Minister, Matt Kean, the Prime Minister, Scott Morrison, and federal Environment Minister Angus Taylor, have all been bombarded with letters of objection to Snowy 2.0 from 30 acknowledged experts in energy, engineering, economics and environment.

After securing approvals for exploratory works and a “segment factory” Snowy Hydro’s main works application is currently under “accelerated assessment” by the Department of Planning, Industry and Environment.

Once that assessment is concluded the project will go to Mr Stokes for final approval.

Some objectors have expressed cynicism and scepticism about the integrity of the approval process,  speculating the Snowy 2.0 “deal” may already have been done in March 2018 when the Turnbull government agreed to pay Victoria and NSW more than $6.2billion for their shares in Snowy Hydro Ltd.

This cynicism seems to be based on the publicly released details of the inter- government negotiations at the time the purchase was announced on 2 March 2018. One of the terms of sale included “that NSW will provide all reasonable assistance to Snowy Hydro in relation to its current and future operations (including planning and approvals process for Snowy 2.0).”

Mr Stokes rejects any suggestion that the approval fix is in and is standing by the integrity of his state’s processes, telling me all projects would be subjected to the “same rigorous checks and balances that ensure they have merit and are in the best interests of the people of NSW”.

Snowy Hydro is sentimentally supported by Australians as a post-war immigrant success story in nation building. In  2006 the Howard government was forced by public protest to withdrew its plan to privatise the jointly owned government company. Kosciuszko National Park was declared by NSW after the hydro scheme was completed and operational.

Now under 100 per cent Commonwealth ownership Snowy Hydro has already purchased from Germany tunnel boring machinery for its exploratory works for a pumped hydro plan which had been mothballed for decades.

Expert objectors now say that at an estimated total construction and transmission grid connection cost of $10billion, Snowy 2.0 is too expensive.  There are alternative “shovel ready” pumped hydro projects without the environmental damage to Kosciuszko National Park.

A 27km 10-metre wide tunnel up a 700metre incline from Tantangara to Talbingo reservoirs, with a massive cavern for reversible turbines and a power station one kilometre underground,  is estimated to require the excavation of 20 million tonnes of rock and soil, quantities which could fill much of Sydney Harbour. The plan would require the dumping of the excavated spoil inside the national park’s boundaries including into existing reservoirs, reducing their water holding capacities.

In a letter to ministers last week one of the expert objectors, Mr Ted Woodley, former managing director of Energy Australia, said Snowy 2.0’s  main works application should not be assessed on its own as the totality of environmental impact should include the crucially associated transmission line project which has yet to be exhibited.

Mr Woodley said Snowy 2.0 was the first ever industrial development inside an Australian national park.  The transmission link from the power station to the national grid, which would cut an easement swathe through the alpine landscape, had yet to be assessed.  “Clearly it would take a very courageous minister to knock it back if the main works is already approved”.

Snowy Hydro declares that the project will create 2000 jobs during the construction phase over four to five years and rejects environmental impact concerns as manageable given the over-riding economic and energy storage benefits.

In his memoir A Bigger Picture former prime minister Malcolm Turnbull, the “father” of Snowy 2.0 and who described himself as a “frustrated engineer” on top of his merchant banking expertise, asserts that the economics of Snowy 2.0 were sound and confirmed by multiple engineering, geological and financial analysis conducted in 2017 and 2018.

“It was estimated to have an internal rate of return of over 8 percent, very good for a big infrastructure project, and Snowy Hydro said they could fund it without any additional government equity, as long as they could retain all their earnings, and not pay dividends for five years.”

But Associate Professor Bruce Mountain, director of the Victoria Energy Policy Centre, told me that Mr Turnbull’s claim that the project will return 8 percent on the Commonwealth’s investment was “implausible” given the company’s projected present value of its wholesale market income.  “Wholesale electricity forward market prices are now around half as high as Snowy Hydro had assumed.  Snowy 2.0 – even based on their own projections of inflated 2017 prices – have absolutely no chance of covering its costs.  Snowy’s board and its shareholding ministers will have some serious questions to answer”.

Professor Mountain referred to an AEMO (Australian Energy Market Operator) just-published projection which significantly differed from Snowy Hydro’s forecast for electricity generation.  The fact that Snowy 2.0 would be effectively idle for its first five years or so would have a “dramatic impact” on it financial returns. 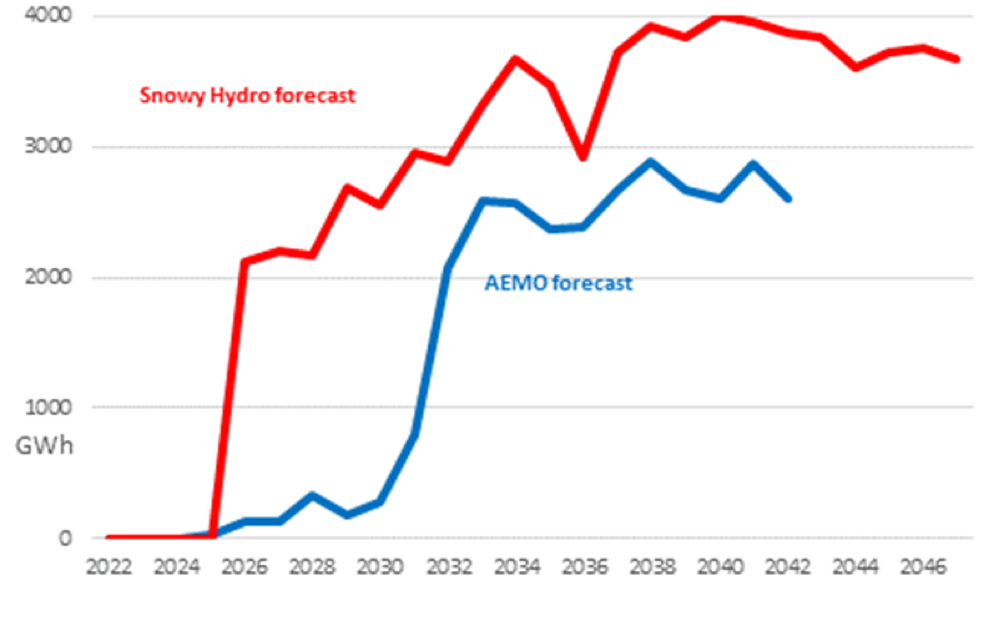 The shareholder, the Commonwealth government, rejects this: “Following Snowy Hydro Board’s final investment decision on 12 December 2018, the Government has reviewed the project’s business case and is satisfied that the project stacks up and will benefit energy consumers and the Snowy Mountains region”.

Since Mr Turnbull’s departure from office the Morrison government, as the sole shareholder, has committed up to $1.38billion in an equity investment while still declaring the project will be financed by Snowy Hydro Ltd.

Mr Woodley and other objectors contend that Minister Stokes should reject Snowy Hydro’s submission as it has not included detailed assessment of any viable alternatives and does not take into account future energy market trends identified by AEMO.  These included the capability of a more robust grid to take the majority of its power from solar and wind enhanced by the rapidly declining costs of in situ battery storage. Mr Woodley said this would push any need for Snowy 2.0’s pumped hydro generation capacity of 2000 megawatts or more out to beyond 2030.

Such is the intensity of the objections that it appears inevitable Snowy 2.0 will end up in litigation before the NSW Land and Environment Court.

Over to you Minister Stokes.

This article was first posted in Crickey on May 13.

Quentin Dempster is a journalist, public broadcasting advocate and a director of ABCAlumni.net.