Global warming and climate change are scientific facts, but beware of attempts to make them responsible for poor human decisions affecting the environment today.

While negotiations were going on at the United Nations climate summit in faraway Madrid, forest fires raged across Australia. Sydney was smothered in thick choking smoke.

Global warming, with man-made CO2 emissions as a major cause, is now beyond scientific dispute. However, while science has a lot to tell us about trends in overall conditions over the long term, the bushfires-climate change linkage argument contains two fallacies.

Carbon emissions do not cause immediate global warming; and global warming does not determine local weather in any location at any given time. International and national climate assessments report only low confidence in links between human-induced climate change and droughts, bushfires, floods and hurricanes. For example, Monday 30th was the coldest December day in Delhi in 119 years. That is no more a refutation of the scientific reality of the rise in average global temperatures caused by CO2-induced climate change than the Australian bushfires are proof of it. Yet both are evidence of increasing climate volatility.

The frequency and intensity of weather disasters, and exposure and vulnerability to them, depend also on land and water use practices, settlement patterns, urbanisation, and so on.

The frequency of natural disasters has increased steeply since 1900, but the death tolls have plummeted dramatically. Some of the worst resulted from human decisions. The primary blame for the Ukrainian famine of 1932–33 that killed 13 per cent of the population lay with Stalin’s policies. Similarly, Mao Zedong’s ideologically-driven farming policies contributed to the great China famine in 1959–61 that killed tens of millions.

Australia has a long history of bushfires. Their causes are both structural (including global warming) and proximate (arson, lightning strikes, carelessness with fire).

Many past bushfires were deadlier despite much lower CO2 concentrations at the time. Over 200 deaths were recorded in an intense three-week heatwave that swept across Australia in January 1896.

In January 1939, temperatures hit 44.7 0 C in Melbourne (the readings back then were not altogether reliable) and 71 lives were lost across Victoria to bushfires that covered almost 20,000km2 (2mn hectares).

Much of the blame for the extent and intensity of the current fires lies with faulty land management practices. In Australia’s hot dry summers with frequent droughts and eucalypt bushland, fallen tinder-dry twigs and undergrowth are combustible fuel. Lack of controlled burning during favourable winter conditions built up fuel loads that made it much harder to stop the fires spreading at speed.

Meanwhile global warming is making Australia’s summers hotter, longer, more drought prone and therefore at risk of more frequent forest fires. However, people are reluctant to accept cuts to living standards to support drastic climate action if Australian action will make little overall difference because others who matter more are free-riding. In 18 months to June 2019, China increased its coal-fired power capacity by 42.9GW (gigawatts) while other countries cut theirs by 8.1GW. It plans to expand existing capacity by 147.7GW and bankroll more than one-quarter of coal development in other countries.

A stop to global warming would help to reduce the numbers of bushfires in the future, but the impact depends far more on emission reductions by the Big Four of China, India, Russia and the US which account for 54.5% of annual global emissions compared to Australia’s 1.1%. This underlines the pointlessness of national action by Australia in current conditions of global climate governance. This makes it challenging to cut coal fleets and impose additional hardships on citizens already angry about rising costs and unreliable power supply.

The International Energy Agency expects the demand for coal-generated electricity to remain stable over the next five years, with India accounting for the biggest growth at 4.6% annually. With export revenues of US $67bn, coal was Australia’s top commodity export in 2018. If India is committed to increasing coal-sourced power anyway, why should Australians forego the export revenue and miners lose jobs?

The smoke from cooking over a wood or dung fire kills millions in the developing world every year. A switch to coal-powered electricity would save millions of lives in the here and now. If Australian coal is cleaner than the alternatives for India (as seems likely), the net global emission doesn’t increase. 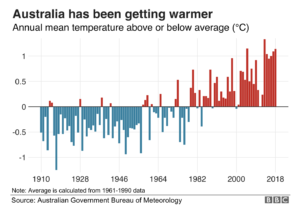 What Australia can do on its own, is to increase the resilience of bushfire-vulnerable communities, reduce fuel loads in the bush, and invest in efficient and rapidly-deployable firefighting forces.

For both fire prevention and management, this seems a better investment of public resources for earlier returns, without however ignoring the need to take an active role in international negotiations to halt global warming. The Morrison government has indeed been delinquent in the latter regard. Given Australia’s warming trend and high vulnerability to rising average temperatures, it should be a champion for global climate action, not a laggard.

Advanced modern economies like Australia and the US have far better disaster preparedness infrastructure and skills and can limit the deadly toll more effectively than developing countries. Energy was a critical component of their industrialisation that today gives them such capacity.

For developing countries, disaster preparedness requires transitioning to a modern economy, for which industrialisation is necessary. Industrialisation requires greater energy intensity to build high-quality dwelling, transportation, public health and education infrastructures. India’s annual per capita energy consumption is only one-third the world average; Americans, Australians and Canadians use between 10 to 16 times as much electricity per person.

A country’s growing intensity of energy use as it industrialises explains why cutbacks to the emission limits of developing countries require longer lead times and global climate agreements have reflected the different treatments of industrialised and developing countries. Such nuances are difficult to explain to a wider public not very interested in blame-shifting for historical and per capita emissions. They see that aggregate emissions from China and India are 29 and 6 times more than Australia’s, respectively, and refuse to back tougher emission cuts by Australia.

Nor, in the existing global order, can sovereign states be legally compelled to accept binding emission quotas. They prefer to set their own priorities on economic, development, industrial competitiveness, and energy policies. Coercion is also impracticable when the most powerful countries are also the worst climate laggards. The Trump administration’s disengagement from global efforts to address climate change is a more serious setback than the level of Australian implementation.

But the world can do little about it. At least the Australians can do something about their own bushfires.

This is a slightly updated version of the original (paywalled) article which can be found here.