Justin Trudeau is trashing his own brand

Canada’s PM Justin Trudeau is caught in a messy hypocrisy scandal, not a racism scandal. To be absolutely clear: Trudeau is not a racist, was never a racist and, in my judgment, has never behaved in a racist manner – just deeply embarrassing. But he has given fresh ammunition to critics to reinforce the narrative that he is a dilettante playboy who lacks gravitas.

Trudeau did behave in the past in ways that he himself now says was racist and has condemned similar conduct by others as unacceptable. This is why he is caught in a trap of his own making. He has cultivated the persona of a global champion of diversity, tolerance, inclusiveness and transparency. The political epitaph of his first term will read: ‘Trudeau talked the talk’ with ‘relentless virtue-signalling’, but ‘failed miserably in the walk’. His global brand is taking a beating and the fracas may cost him the election next month, reducing him to a minority government if not the opposition.

The first bias confirmation of Trudeau being a show-pony with neither policy nous nor political streetsmarts came with his week-long trip to India in February 2018. It was a PR disaster at home because it looked like an extended family vacation at taxpayer expense, and a political disaster in India because of the Sikh dimension. He was ridiculed for the dazzling display of sartorial splendour more suited to lavish Bollywood wedding scenes than quotidian Indian lifestyle.

Jaspal Atwal, convicted of attempting to kill a visiting Indian cabinet minister in 1986, posed with Trudeau’s wife in Mumbai and was invited to the official dinner at the Canadian High Commission in New Delhi. With wounds from some Canada-based Sikh terrorist attacks on Indian targets in the 1980s easily reopened, this was a major diplomatic faux pas. Yet, remarkably, it had been foreshadowed two years earlier with an ill-judged and high-risk boast that he had more Sikhs in cabinet than India’s PM.

The affair took another astonishing turn when in a background briefing for reporters, national security adviser Daniel Jean suggested that Atwal’s presence was arranged by factions within the Indian government. Trudeau defended Jean. At the time, the entire episode could be explained away as an amateurish gaffe by an inexperienced government. Rookie mistakes by a government several years in office cannot be as easily brushed aside.

The first serious dent in Trudeau’s reputation for integrity, competence and feminist credentials came with the SNC-Lavalin affair. On 7 February, The Globe and Mail broke the story that Justice Minister Jody Wilson-Raybould – an indigenous woman – had resisted efforts by the PM’s office to improperly influence her consideration of whether or not to accept a plea bargain-equivalent settlement with the giant Quebec construction firm SNC-Lavalin, or lay criminal charges of bribery. The firm has close ties to the Liberal Party and Quebec is a Liberal stronghold and Trudeau’s home province.

In Trudeau’s cabinet, 15 of 31 posts were held by women, compared to 12 of 39 in his predecessor’s. When asked why gender parity was important, Trudeau famously replied: ‘Because it’s 2015’. As the SNC-Lavalin scandal snowballed, Wilson-Raybould was fired from cabinet and another female colleague Jane Philpott resigned in protest. Both were subsequently expelled from the party: Trudeau appeared to have problems with powerful women in cabinet. The political damage deepened with transparent efforts to shut down the debate by using brute majority to close investigations by the parliament’s justice and ethics committees. The independent Ethics Commissioner Mario Dion conducted his own investigation and found Trudeau guilty of trying to improperly influence Wilson-Raybould. Bizarrely, Trudeau accepted responsibility but disagreed with Dion’s conclusions. His office stalled the subsequent obstruction of justice investigation by the RCMP. Not a good look for a champion of transparency.

But wait, there’s more. On 27 June 2018, Vice Admiral Mark Norman was charged with leaking confidential details of a cabinet discussion about a supply ship contract. Like the SNC-Lavalin case, this too looked like political interference to make the Vice Chief of Defence Staff the scapegoat for an embarrassing political leak. According to one political commentator, ‘this rotten egg falls on’ Trudeau. The case fell apart this May and Norman was reinstated. In a dig at Trudeau’s handling of SNC-Lavalin, Norman’s lead woman lawyer Marie Henein declared after the case: ‘Fortunately, Vice-Admiral Norman didn’t fire the females he hired’.

The blackface scandal could prove very damaging because it further consolidates the narrative of a hypocrite. On 18 September, in the middle of the election campaign, Time magazine published a 2001 photo of a 29-year old Trudeau when he was a teacher at an exclusive school in Vancouver. His face and hands are darkened for the character Aladdin at an Arabian Nights-themed party, and one hand is splayed across the bare upper chest of a woman. Within a day several other photos surfaced of Trudeau wearing black and brown faces and he admitted he could not be sure how often he had done it. Politicians who wore blackface in the past have been called out for implicit racism in the US. Last October, Megyn Kelly of NBC was pilloried, attacked, and eventually fired for talking about the context in which people wore blackface in the past for Halloween. Trudeau was guilty of actually doing it himself, and that too not in the last but in this century. 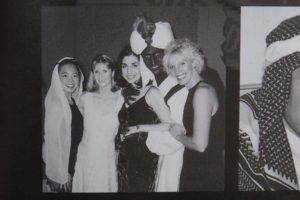 Trudeau has paraded his woke credentials with respect to racial and gender sensitivity. Confirming that was him in the photo, he said he now realises it was a racist act and deeply regrets it. Christie Blatchford wrote: Trudeau ‘is always quick to judge others, condemn them, and always with that rich Trudeau smarminess’. He cut ‘himself the slack he has denied to so many others’. In sum, ‘it’s his hypocrisy that is so galling’. The BBC reported: ‘The images are so embarrassing for the prime minister because he has positioned himself as a champion of social justice, inclusivity and diversity’. Henry Olsen in the Washington Post: Trudeau ‘has long used his preening moral superiority as rationale for political leadership… With respect to gender and now race, Trudeau has shown a mind-blowing degree of hypocrisy’.

The voters will have their say on 21 October.