The United Nations is the world’s premier and its only universal international organization. It alone houses the divided fragments of humanity. But currently it faces a threat to the foundational principle of inclusivity. Its purpose-built headquarters was located in New York after the Rockefeller family announced a donation of $8.5mn (worth $103mn in 2014) and the city contributed land along the East River and spent $23mn ($279mn in 2014 dollars) on constructions and improvements around the permanent site. On 14 December 1946, the General Assembly voted overwhelmingly to make New York the host city. The Headquarters Agreement signed in 1947 obligates the US to grant unrestricted access to citizens of all UN member states engaged in official UN duties. 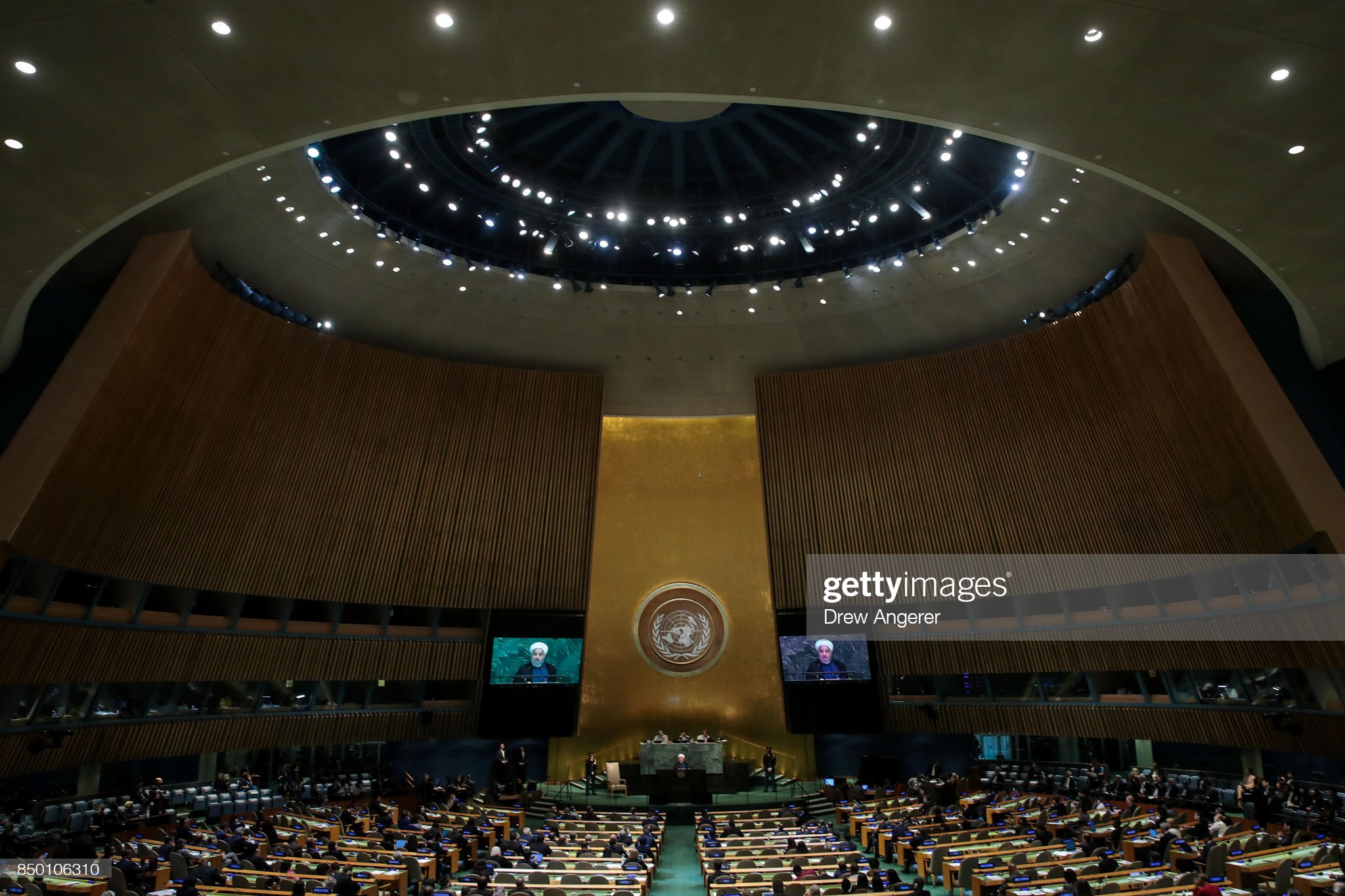 President Hassan Rouhani of Iran is displayed on monitors as he addresses the United Nations General Assembly at UN headquarters, 20 September 2017 in New York City. Photo by Drew Angerer/Getty Images

There is no reason in principle why New York should have a permanent stranglehold on the location, especially if the US is going to be serially disrespectful to the world body. PLO leader Yassir Arafat was denied a US visa to address the General Assembly in 1988; the session was temporarily shifted to Geneva, host of the League of Nations. In November 2013, Sudan’s President Omar Hassan Al-Bashir was denied a US visa because he was under indictment by the International Criminal Court, even though the US itself is not an ICC party. Ironically, last year, US officials threatened to subject ICC judges probing possible US war crimes in Afghanistan to criminal prosecution in US courts if they visited the US. The UN failed to stand up for international law and the ICC judges dropped their investigation.

Fears that Iran’s Foreign Minister Javid Zarif would be denied a visa last month proved misplaced. But ten Russian senators were denied US visas. Foreign Ministry spokesperson Maria Zakharova said the decision was “an outrageous example of disrespect” for the UN by the US and “a failure to fulfil its obligations as host country to the world organization.” On 3 October Russia’s first deputy representative to the UN, Dmitry Polyanskiy proposed that the First Committee, which deals with disarmament and international security, postpone its meeting and reconvene in 2020 in Geneva or Vienna. Earlier, on 26 September, President Hassan Rouhani said Iran would support any move to transfer the UN headquarters outside the US.

How feasible and likely is this? Any decision to relocate the HQ to another country would cause Washington to reassess the benefits of continued membership. A UN minus the US would be dead on arrival in its new host city. At the same time, simply succumbing to US blackmail every time visas are denied to others wanting to attend UN sessions is clearly unacceptable: it would progressively drain UN credibility, legitimacy and effectiveness.

Instead, delegates could try two alternatives that register strong protest but postpone any irrevocable decision on relocation. First, they could reschedule committee sessions in Geneva, Vienna or Rome as alternative UN capitals that are convenient for most other country’s representatives for travel purposes. The second, more drastic measure would be to cancel the annual leaders’ opening of the General Assembly should the leader of a prominent member state be denied a visa. If the preposterous unilateral visa denial persists in following years, then they could activate consideration of a permanent shift.

A potential powerful ally to bring home the costs of such a development is New York city. A credible threat to leave would concentrate American minds on the reality that the UN’s presence is a net revenue gain. The US provides about $3.3bn a year to finance UN regular and peacekeeping activities. In December 2016, the Mayor’s Office published a report evaluating the UN’s financial costs and benefits to the city. The UN generated $3.69bn in economic benefits to the city in 2014. The UN system employed 10,900 people directly, making it the 22nd biggest employer in the metropolitan area. The UN community supports additional job creation through its annual operating expenditures, including property rentals, utilities, purchases of supplies and equipment, and visitors to the city, taking the number of fulltime and part-time jobs to over 25,000.

Moreover, the UN is “a cultural and educational resource of immeasurable value to New York City. It is an educational resource for schools and colleges across the United States, offering guided tours and opportunities to learn about international affairs and diplomacy.” Beyond the direct financial benefits, New York gains priceless prestige as a global capital directly as a result of hosting the UN Headquarters.

Conversely, the very prospect of the UN leaving would see city property prices and rental incomes plummet. But the UN should not make a threat it’s not prepared to carry out.

Ramesh Thakur is emeritus professor in the Crawford School of Public Policy, Australian National University and a former United Nations Assistant Secretary-General. He is the author of The United Nations, Peace and Security: From Collective Security to the Responsibility to Protect.