RAMESH THAKUR. The establishment strikes back at the deplorables. Part 1: ‘Impeach the MF’

Fasten your seatbelts. With fresh revelations on almost a daily basis, we look set for convulsive politics over the coming weeks and months in the UK, the Mother of Parliaments, and in the US, the world’s most successful and powerful democracy, even while the world’s most successful and powerful non-democracy, China, grapples with its own protracted dilemmas in Hong Kong. At this stage it is hard to see happy endings in any of the three storylines, and that will have deleterious consequences for us all. But this four-part article is about the Anglo-American crisis of democracy.

Professionally, I have long argued that a key difference between the established mature democracies (including India), and many others that succumbed to coups and dictatorships, often accompanied by violence and atrocities, was that in the former, the losers accepted the verdict at the polls no matter how bitter (as in 1975 in Australia and the US Supreme Court awarding the 2000 election to George W Bush), and campaigned to overturn it at the following election. In the latter, by contrast, the defeated used every trick they could think of to undermine, destabilise, destroy and imprison (and sometimes kill) the victors after throwing them out of office extra-constitutionally. Personally, I experienced the abandonment of democracy for one year by PM Indira Gandhi in 1975 and watched the coup and years of political instability and heightened racial tensions in Fiji after 1987, knowing several of the leading personalities on both sides of the divide. By both professional training and personal conviction, I remain firmly committed to democratic politics through the contest of ideas and electoral mandates as the best available option in the real world for conducting and resolving the struggle for political power.

This is why political events in the UK and the US have prompted genuine anguish. The explanations for the very surprising voting outcomes that saw Donald Trump elected and Brexit approved include a range of complex factors. But two are common to both: while the economic elites concentrated in cities may have done well from globalisation, ‘middle America/England’ had not; and a revolt against the ‘scolds and snobs’ among the city-based cultural elites who look down on ordinary folks in country towns in the heartland. In both cases, furthermore, the elites who know best never accepted the legitimacy of the outcomes and set about trying to frustrate and subvert the results by any means necessary. Yet in both cases, opponents of the victorious side betray deep-seated fears of losing in the electoral arena. The two outcomes might represent flaws in and stains on liberal democracy; overturning them by means other than elections could constitute clear and present danger to representative democracy and risk instability, volatility and violence.

In addition, in Trump’s case, the chief driver behind efforts to fabricate a Russia collusion narrative might have been to disrupt and discredit his presidency. The most consequential foreign policy impact has been to torpedo any attempt to repair badly damaged relations with Russia. This has left the whole world a lot more dangerous place for all of us. There is a strong Ukraine connection in this story. Because of the gravity of the consequences, I for one would like to know just what happened and who were the principals behind the effort. Attempts to derail or preemptively discredit this investigation, rather than concerns over the damage to Joe Biden’s candidacy, could well be a powerful motivation behind the Democrat’s drive to impeach Trump. With so many substantial ‘known unknowns’ in the Ukraine connection, only the wilfully blind would insist: ‘Nothing to see here, move on’.

Before coming to the Trump impeachment inquiry, five critical backgrounders.

First, I detest Donald Trump. He is foul, crude, vulgar, erratic and unpredictable, not just America’s but the world’s disruptor-in-chief. That his fingers are on the nuclear button terrifies me. That he should be America’s face and voice to the world may well be the best argument against electoral democracy. But he is the duly elected president. I also detested George W. Bush and Tony Blair, although not with the same intensity. In a just world, they would have been in the dock, with John Howard to keep them company, in an international criminal trial at The Hague, defending the charge of aggression that was dubbed the ‘supreme crime’ in Nuremberg. Nevertheless, as long as they were in office, I gave them the formal respect due to that office. Trump deserves the same.

Second, as a candidate running for president, Trump promised to pull the US out of its many wars and re-set relations with Russia. This offered at least one important silver lining in his otherwise vile candidacy for, given military and geopolitical realities, the biggest current threat to world peace is the risk of a Russia–US war. His ‘peacenik’ credentials so alarmed the reigning warmongers in the Washington establishment that a large number of prominent Republican national security heavyweights, saying they would not serve in a Trump administration, flocked to the Hillary Clinton camp instead.

Third, the attempted re-set of Russia relations was derailed by the Trump–Russia collusion narrative to game the US presidential election that consumed Washington for the first two-three years of the Trump presidency. I will come back to this.

Fourth, the chief cause of US–Russian relations being broken is a succession of misjudgments and provocations by the US that, rooted in triumphalism, were astonishingly insensitive and short-sighted. The culmination of this was the Obama administration’s complicity in the instability that overthrew the pro-Russian but elected President Viktor Yanukovych of Ukraine in 2014 and replaced him with the pro-West Petro Poroshenko. Russia retaliated by destabilising eastern Ukraine and reincorporating Crimea, both with heavily Russia-leaning populations.

Fifth, for the Democrats, Trump has been the impeachment-in-waiting president until the right trigger. Whatever the excuse or justification, Trump’s real impeachable offence was his election; the rest has been mere detail. The title of Part 1 of this article is from the first Palestinian-American to be elected to Congress. Hours after she was sworn in, Representative Rashida Tlaib (Democrat) from Michigan boasted how after her election victory, she had told her son (!) ‘we’re going to impeach the motherf****r’ Trump [watch the video here]. Since the impeachment inquiry’s launch, she is proudly marketing T-shirts emblazoned with ‘Impeach the MF’. 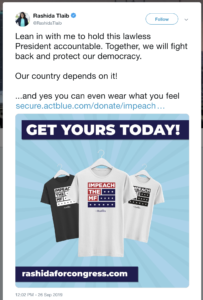 Having retaken the House last year, the Democrats were well-placed to begin impeachment proceedings. Because the Republicans control the Senate and conviction requires a two-thirds Senate majority, they had to wait for the right trigger. Allegations by a ‘whistleblower’ that Trump had tried to enlist Ukraine’s help to discredit the leading candidate in the Democratic primaries for the 2020 presidential nomination was the catalyst to activating proceedings.

I put ‘whistleblower’ in quotes because until such time as Congress and the Democratic leadership acknowledge Julian Assange, Edward Snowden and Chelsea Manning as whistleblower heroes who warrant full legal protection under that status, they have zero credibility on this politicised use of the terminology.

Barack Obama had many admirable qualities as president. Even so, we do need to remove rose-tinted glasses when appraising the totality of his legacy. To start with, just think of his policies towards Assange, Snowden and Manning. Then recall that Obama was responsible for about 80% of deaths caused by drone strikes and referred to as ‘Lord High Executioner’. A major joint study by the law schools of Stanford and New York universities concluded that they were of dubious legality under international, humanitarian, human rights and even US constitutional laws. On 30 September 2011, US citizen Anwar al-Awlaki was killed by a drone strike approved by Obama. In effect, while denying the US-born al-Awlaki any legal representation, Obama acted as prosecutor, jury, judge and executioner. In other words the administration had a somewhat cavalier attitude towards legal limitations on its powers.