Ten years ago, on 23 November, PM Kevin Rudd and Opposition Leader Malcolm Turnbull had worked together to draft a compromise environmental policy for Australia that both could live with. That fleeting moment of bipartisan unity was sabotaged by Andrew Robb and Tony Abbott from the Liberal Party and the Greens. Since then, the different sides have dug ever deeper trenches in a bitter political struggle that has reduced climate action to a wedge issue. The need is for transformative action but governments remain trapped in piecemeal and manifestly inadequate reforms.

We face criss-crossing crises of climate change, mass loss of species, topsoil erosion, forest felling and acidifying oceans. Global warming threatens more and worse cyclones, droughts, forest fires, floods and climatic shifts, with catastrophic consequences for food, water, livelihoods, housing and health. The poorest people and countries will be the hardest hit, with millions locked in a downward spiral of malnutrition, water scarcity and loss of livelihoods. In Asia 237mn people, including 93mn, 42mn and 36mn in China, Bangladesh and India, respectively, could face annual coastal flooding threats by 2050.

To limit global heating on 2010 levels to 1.50C (ideal) or 20C (minimum) by 2030, anthropogenic emissions must decline by 45%/25% before 2030 and reach zero by 2050/2070 respectively. The actual trajectories are in the opposite direction. Despite all the attention, promises and action, global carbon emissions climbed to a record high last year; 136 of the 184 Paris Pact climate commitments are insufficient to meet either 1.50C/20C goal. Efforts must increase threefold to meet the 20C target, and fivefold for 1.50C.

Last decade, while still in opposition, Labor began to formulate a new energy policy designed to respond to the scientific consensus on the existential threat of climate change and global warming. Upon winning election in 2007, the Rudd government published a Green Paper on climate change for public discussion on 16 July 2008, followed by a White Paper on 15 December 2008. It then proposed a Carbon Pollution Reduction Scheme (CPRS) as a cap-and-trade emissions trading scheme for anthropogenic greenhouse gases as a major departure in Australia’s energy policy. The CPRS was slated to commence in July 2010 but the legislation was defeated. 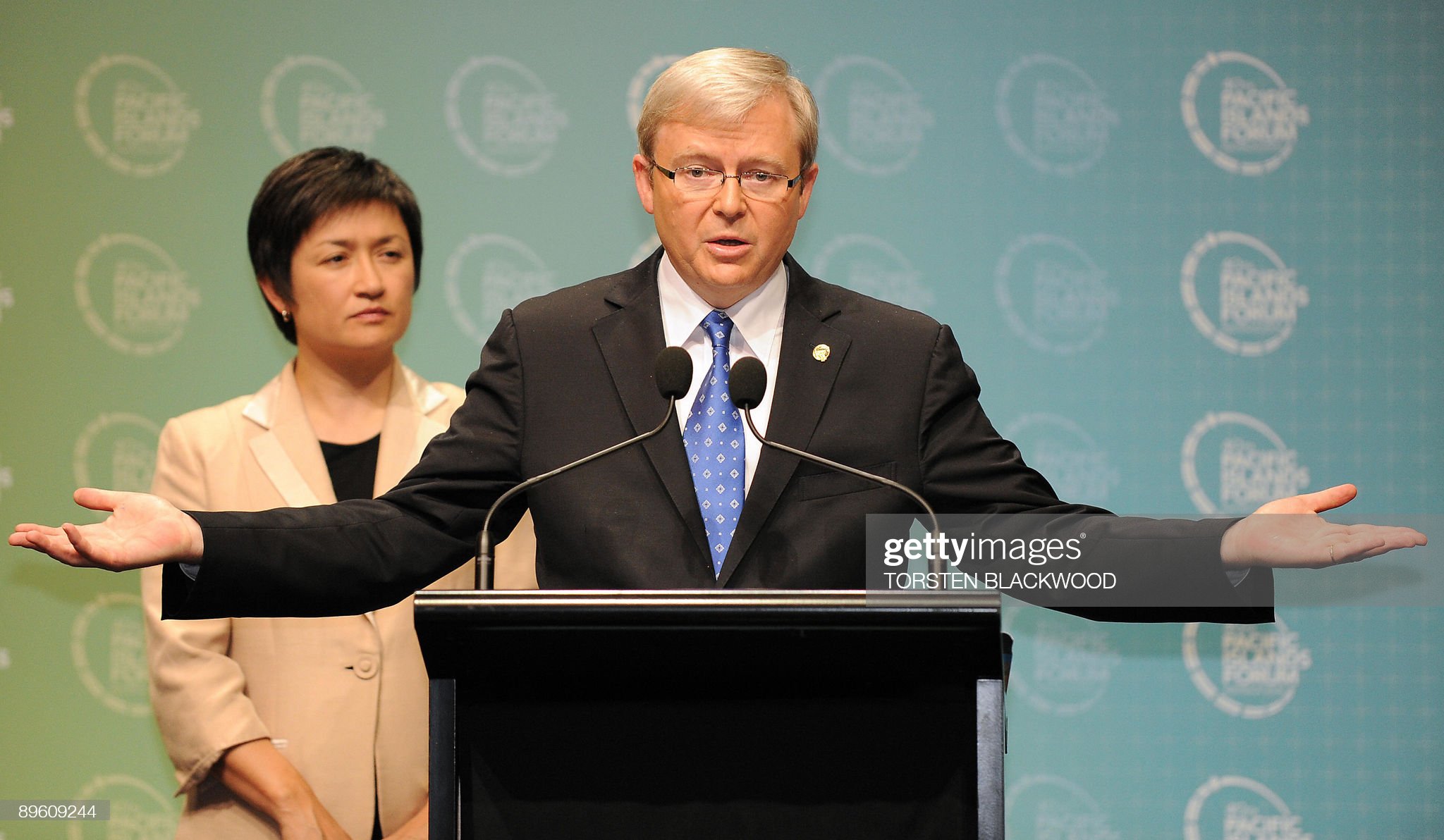 The Greens joined the LNP in opposing the CPRS. While for many Coalition diehards it went too far, for the Greens it wasn’t stringent enough. In an interview to mark the tenth anniversary of the watershed episode, Rudd remarked that the Greens had demanded a 40% emissions cut in full knowledge that this would put Australia 15%-20% higher than any other country’s offer. He believes they were negotiating in bad faith: ‘They designed it in a manner to cause the negotiations to fail’.

So Rudd went to Plan B, which was to negotiate with the Liberals. Robb, at the time the shadow minister for climate, was on sick leave from Parliament but, according to a tenth anniversary article by Annabel Crabb for the ABC, returned to Canberra on 23 November and was horrified to read the details of the Rudd-Turnbull agreement. Abbott, Eric Abetz and Nick Minchin were staunch opponents of the CPRS. But unlike the other critics, Robb had studied the details of the deal and used his health to trick Turnbull in the party room for the opportunity to voice his opposition and kill the deal. In short order, Turnbull was rolled by Abbott with his single-minded pursuit of killing any carbon tax in any form or shape and the CPRS was duly defeated in Parliament with both the Coalition and the Greens voting against it.

The rest is history as regards Australia’s failures on environmental action. As Kane Thornton, CEO of Clean Energy Council, notes: ‘What happened back then has just so fundamentally shaped the direction and the context for climate and energy policy ever since’. The Greens haven’t really been called out for their role in the enduring and substantial damage done to the one cause that provides their primary raison d’être, as well as to the country, by that fateful decision a decade ago. They deserve to be held to account.

In April 2010 Rudd walked away from the scheme and, having famously described in 2007 that climate change was not just an environmental but also ‘a great moral, economic and social challenge of our generation’ with deep national security implications, never fully recovered from the stumble and the embarrassment. The political consequences were terrible for the country and we have been paying a steep price ever since. That event was the precursor to the Rudd-Gillard-Rudd fiasco on the Labor side of the political divide. Seduced by the temptation of being Australia’s first woman PM, Julia Gillard stabbed a first-term PM who had led Labor from opposition to a decisive victory and was never able to escape the resulting taint of illegitimacy. On the Coalition side too the opposition to the CPRS was the trigger for Abbott to dethrone Turnbull from the leadership, take the Coalition to victory in 2013, in turn be toppled in an internal party coup by the vengeful Turnbull in September 2015, and use his backbench presence to whiteant Turnbull until replaced by Scott Morrison as PM in August 2018.

In other words the Greens bear a fair share of the blame for the chaos and volatility that has undermined good policy development and poisoned Australian politics with deep and bitter partisanship for the past decade. The churn of leaders and PMs has been reminiscent of Japanese politics, ironically at a time that Japan itself has experienced stability as Shinzo Abe became its longest-serving PM.

As for economic policy, the Tweedledum and Tweedledee approach of the two main political groupings does not inspire confidence that Labor governments would necessarily have done notably better in the stewardship of the nation’s finances. Still, as Ian MaAuley and John Menadue have pointed out, the empirical record does not substantiate the general perception and LNP self-belief that they are the better economic managers. And the Rudd government did successfully guide Australia through the 2008 global financial crisis. 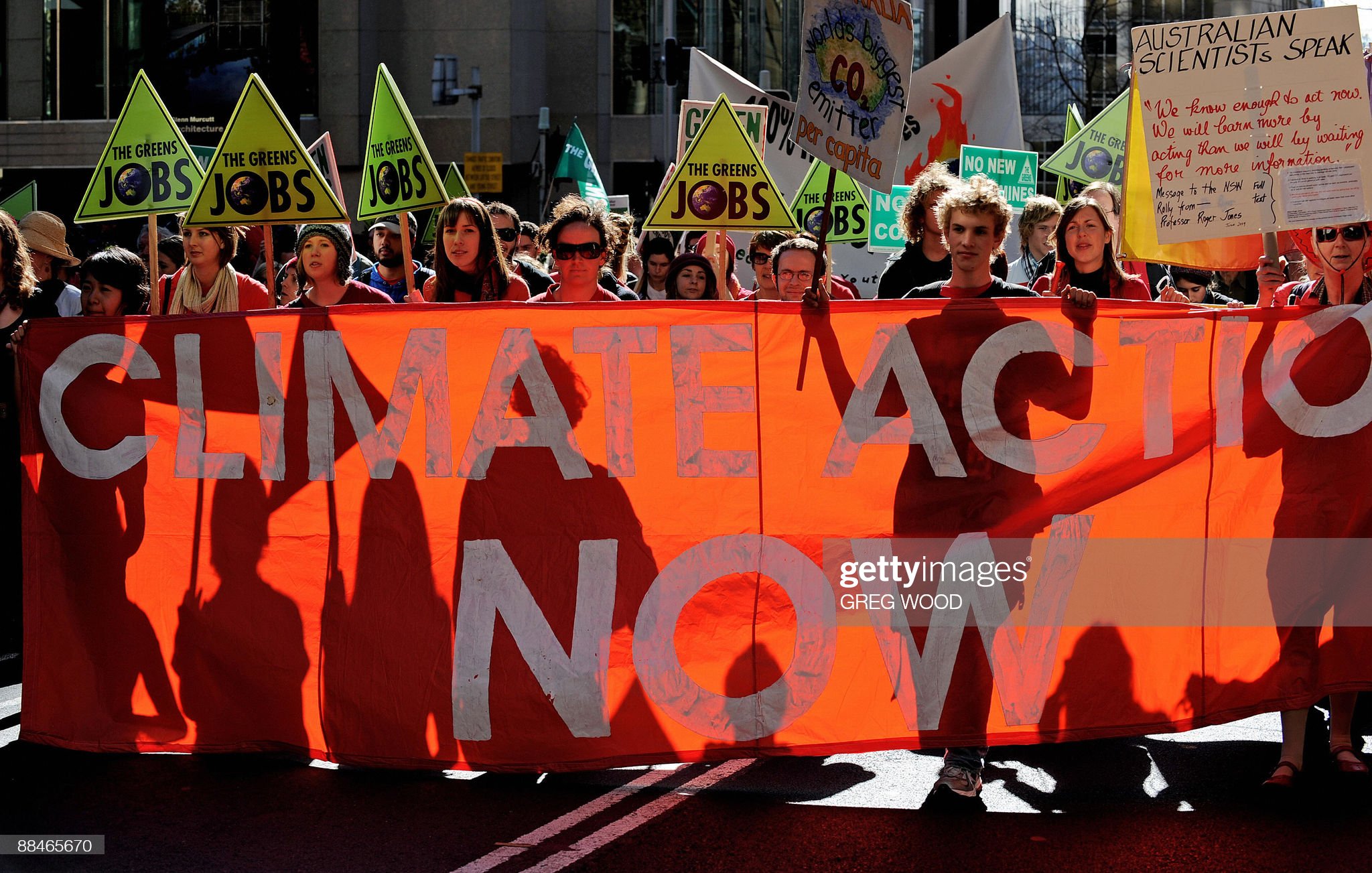 Protesters march behind a banner during the ‘National Climate Emergency Rally’ in Sydney on 13 June 2009. Photo: Greg Wood/AFP via Getty Images

A consequentialist assessment of their unflinching ethic of conviction would come to a far harsher judgment than John Menadue’s gentle rebuke of the impotence of the pure-minded. To be sure, the Greens had a case. The CPRS had proposed a 5% unilateral reduction on 2000 by 2020, rising to 15% if other major emitters also came on board. (In May 2009, after much criticism for timidity, the upper conditional target was raised to 25%.) But the IPCC had called for a 25-40% cut on 1990 emissions in order to keep temperature rise to under 20C from pre-industrial times. This is why the CPRS was criticised by the 2009 Climate Action Summit, scientific experts and environmental groups like the World Wildlife Fund, the Wilderness Society and the Climate Institute.

The Greens were thus in good company. Unlike the advocacy and activist individuals and groups, however, the Greens are a political party with members in Parliament and their votes have real-world policy consequences. This is why the Greens have to vote responsibly and must be held accountable for the consequences of their voting choices, especially as not letting the best be the enemy of the good is a familiar enough political adage. (I hope to return to the folly of ignoring domestic and international politics in a follow-up article.) Virtuous intent is not a cloak of immunity against deserved criticism.

Hence the harsh conclusion stands. Without that game-changing vote in 2009, Rudd might well have survived, Gillard might have become PM in an orderly transition without the stain of illegitimacy, and Abbott might never have been PM. Instead of mounting the moral high horse to denounce the Morrison government’s inaction despite the graphic evidence of the drought and forest fires, Greens should offer an apology to the nation for the lost decade of a responsible, albeit not maximalist, emissions reduction policy and deep political instability. Alternatively, they could make a counterfactual argument to show why the last ten years would have been worse, for Australia and the world, with the CPRS. That would certainly make for interesting reading.

If Labor is to begin clawing back its share of the primary vote, it needs both to court disaffected blue collar workers and to compete directly with the Greens for the environment vote as the natural constituency for both parties. To succeed in this, Labor must highlight the Greens’ role in terminating the CPRS in 2009 – and in the process killing off rational public discussion of how best to decarbonise while triggering extreme political volatility.

Ramesh Thakur is emeritus professor in the Crawford School of Public Policy, Australian National University. He is not and has never been a member of a political party in any country.