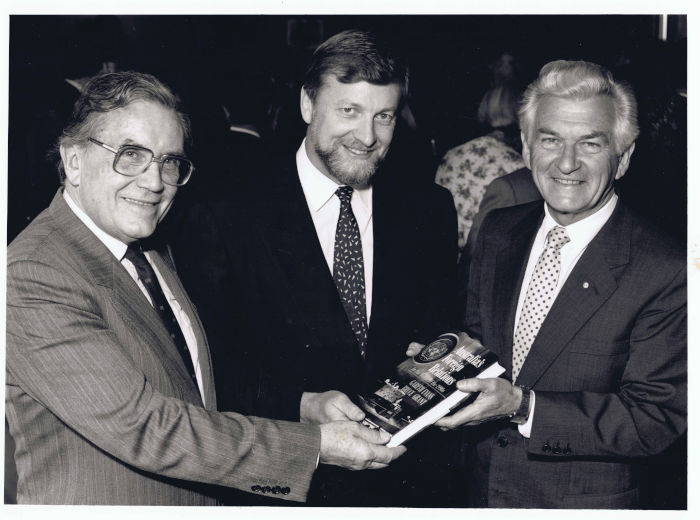 Bruce Grant, who died in August at the great age of 97, made an extraordinary contribution, as a writer and thinker, to Australia’s understanding of itself as a nation, and our place in the world. His richly well-lived life – with its multiple incarnations as journalist, author, university lecturer, diplomat and ministerial adviser – was commemorated at a memorial event in Melbourne this month, at which I offered this tribute.

Bruce was a complex and multi-faceted character. Not exactly a paragon of all the virtues, public and private – who of us are? But wonderfully subtle and supple intellectually; a supremely gifted communicator; passionate in his loyalty to and confidence in Australia; and passionate in his commitment to principled public policy. And combined with all of that, having the kind of impossibly good looks and impossible charm of the foreign correspondent, and diplomat, from central casting.

Bruce’s contribution, sustained over nearly seven decades, was one of almost unimaginable breadth, depth and richness, which strongly influenced the thinking of generations of policymakers. Certainly including me – not only in the time we worked together when I was Foreign Minister in the ‘80s and ‘90s, but also for decades before, through his wonderfully lucid public affairs columns for The Age, and his series of path-breaking books, starting with his classic Indonesia in the mid-‘60s.

The point about Bruce is simply, above all, that he was on the right side of history in every major judgement call he made – in his hundreds of newspaper columns, his dozen major non-fiction books, his university teaching, and in his advice to Gough Whitlam and later to me – about the great issues of the day relating to foreign policy, Australia’s national identity, and the relationship between them.

He was right in his abhorrence of the White Australia policy, and of racism, racial discrimination, and racial injustice in any form, anywhere – an abhorrence clear in everything he wrote, and the way he lived his life.

He was right in his early recognition that Australia’s future lay overwhelmingly in Asia, determined by the reality of our geography, not our history – an argument set out with particular clarity in his 1983 book, The Australian Dilemma: A New Kind of Western Society.

He was right in recognising the critical importance of Indonesia to our future security and prosperity, earlier than almost anyone with his 1964 book: a story that seems still, unhappily, not to be fully understood or accepted by our policymakers.

He was right in recognising and celebrating – as he did so admirably during his two years as Australian High Commissioner, appointed by Gough Whitlam – the richness of India’s history and culture, and, again, its central importance to our, and indeed the whole region’s, security and prosperity: the story he tells so well in his 1982 book, Gods and Politicians.

He was right, in his 1979 book on those fleeing the ravages of the Vietnam war, The Boat People, to not only celebrate the triumph of the human spirit under appalling stress, but to recognise the moral responsibility of countries like ours to help those in distress – something that seems to have been shamefully forgotten by too many of our more recent politicians, in their post-Tampa race to the bottom on asylum-seekers from Afghanistan, Sri Lanka, Myanmar and elsewhere.

He was right to recognise – clearly nurtured by his time with Gough Whitlam in the 1970s, who initially wanted him to become our ambassador to the United Nations to showcase the new government’s dramatically changed policies on colonialism and racism – the importance of multilateral diplomacy, the significant norm-setting role of the UN, and the contribution to sustainable security that could be made by effective UN peacekeeping.

He was right in seeing not just the advantages but the risks of Australia’s alliance with the United States – that it was capable of profound misjudgement, as in Vietnam and with Iraq in 2003, that its sense of exceptionalism and determination to maintain absolute primacy could lead it astray again, and that its interests might not always be the same as ours. Themes that he brilliantly developed from his earliest to his last books, including The Crisis of Loyalty: A Study of Australian Foreign Policy in 1972, A Furious Hunger: America in the 21st Century in 1999, Fatal Attraction: Reflections on the Alliance with the United States in 2004, and his 2017 memoir Subtle Moments: Scenes on a Life’s Journey.

He was right in arguing, in almost everything he wrote going back his early Age columns in the 60s’, for maximum Australian defence self-reliance.

And he was right, above all, in his instinct – which strongly chimed with mine when we worked together – that Australia, if we could become confident in its own skin and throw off our long over-developed sense of dependence on distant great and powerful friends, had a really major international role to play as a creative, energetic and principled middle power.

For Bruce, like me, ‘middle power’ language has no connotation at all of mediocrity or insignificance. ‘Middle powers’ are just those not economically or militarily big or strong enough to impose their policy preferences on anyone else – but which are nonetheless sufficiently capable, credible and motivated to be able to make an impact on international relations. He wrote on this theme with ever-greater conviction during his later years, leading an Australian Institute of International Affairs colloquium on the subject in 2007, and devoting a whole chapter of his 2017 memoir to it.

Not just the ‘middle power’ theme, but every one of the judgement calls I have just listed where I think most of us would agree Bruce was spot-on, were captured in the 400-page book the two of us wrote together in 1991, with a second edition four years later, Australia’s Foreign Relations.

This collaborative enterprise was, as you might have guessed, a rather challenging one. For me, with everything else going on in my ministerial life, the biggest challenge was simply carving out the time to fulfil my agreed part of the project – which was to be responsible for the overall structure and policy direction of the book, some of the primary writing (eg the section on the politics of foreign policy), and the settling of all the final text that went to press.

For Bruce, who did the backbreaking job of gathering all the research material and writing the first drafts of nearly every chapter, the biggest challenge, I guess, was working with me! I do have to accept, with such grace and fortitude as I can command his description of me in his memoir as not only ‘indefatigable’ and ‘hyperactive’, but occasionally just a teeny bit ‘irritable’. And sometimes – worst of all – leaving him feeling that his ‘prose had been run over by a steamroller’. The reality, of course, is that like most authors since time immemorial, we both hated anyone screwing with our prose, and had to take some pretty deep breaths on occasion to find language with which we could both live. But although there were a few bumps and grinds along the way, I think the final product was, as we say in our joint Foreword, ‘a genuinely seamless blend, in which our respective roles were completely complementary’. Our book was critically well-received, and its core themes do seem to have stood the test of time.

Certainly there is plenty of original, un-steamrollered, very recognisable Bruce language – wonderful language – in that published volume. For example:

And perhaps most pertinently of all given the current security environment, in referring to Kim Beazley’s 1987 Defence White Paper, which spelt out a coherent policy of defence self-reliance, relying on ourselves, not others, to cope with all but the most extreme threat contingencies, Bruce puts it this way, using words I appropriated over and again as Foreign Minister:

I’m afraid nobody these days seriously thinks we have that degree of self-reliant defence capability. Whether it makes sense for us to now be buying, as we seem determined to do, eye-wateringly expensive nuclear-propelled submarines that are manifestly going to increase our entanglement with Washington’s military priorities at the possible expense of our own, is a debate which I think Bruce would be relishing getting his teeth into if he was still with us.

That Bruce is no longer with us seems a kind of category mistake. He just seemed for so long to be indestructible – in his curiosity, his engagement with ideas and issues, his prodigious written output, and his physical youthfulness – long after the rest of his male contemporaries and colleagues, including those like me twenty years his junior, passed their physical use-by date.

One of the downsides of living, for the most part healthily, to a great age, is that there are not too many contemporaries left, to deliver eulogies and write obituaries, and to celebrate publicly your life achievements. Such has been Bruce’s fate. But celebrate his public – as well as his family – life we must, because it was a big life, full of vitality and real achievement, the like of which we can only very rarely hope to see again.

Gareth Evans was a Cabinet Minister throughout the Hawke-Keating Governments of 1983-96. He was subsequently President of the International Crisis Group (2000-09) and Chancellor of the Australian National University (2010-19)