Humanity in medicine. The life of physician Dr Stanley Goulston

Proverbs 22.v.6 states: “Train up a child in the way he should go, and even when he is old he will not depart from it.” I suspect Stan’s character was shaped by his deeply ingrained Jewish faith, the character of his father and father-in-law, the loss of a mother he never knew, an acute observation of inter-family relationships and a respectful obedience to authority.

A biographer takes on a considerable responsibility. He knows that the result of his hard work will be scrutinised closely by some who are more expert than he in some particular aspect. He has two questions to consider. Have I captured the “essence” of my subject and have I shown how this evolved in the life described?

Those who knew Stan Goulston at some point in his long life will be able to assure Breen that he has done very well. This is a fine biography of a fine person.

The forward by Miles Little is a gem and must be read and contemplated before reading the text.

The remaining six chapters, although still biographical, incorporate themes that add to an understanding to the changing face of consultant medical practice. In addition, there are two appendices – a short biography of Stan’s brother Eric who was, as an elder brother of 10 years, a developmental influence; and an essay entitled Human Values in Medical Education. This is a 1997 report by Stan setting out his views to the Faculty of Medicine (Sydney University).

Each chapter is extensively annotated (31 pages), bibliography and sources cover 13 pages and there is a seven-page index.

This book is more than just a biography. Stan Goulston lived through important times –economic depression, a world war, the development of medical specialisation and changes in specialist training. Breen cleverly uses Stan’s experiences to enlarge on these issues.

As an Old Sydneian, I especially liked the picture painted of Stan’s time at Sydney Grammar. A comfortable school under a respected headmaster that catered well for boys of any level of sporting prowess and with a teaching staff that allowed Stan to matriculate with an excellent leaving Certificate performance.

Chapter 4 – A Rat of Tobruk – gives not only a thorough picture of Stan’s outstanding work as a Regimental Medical Officer but also a succinct analysis of the North African campaigns until the Australian withdrawal in September 1941.

Similar bonuses apply to chapter 8, which is a valuable essay on the development of gastroenterology in Australia into which Breen has considerable insight as well as documenting Stan Goulston’s development as a leading gastroenterologist.

As a Censor, Councillor and President of the Royal Australasian College of Physicians, Stan was active when sweeping changes were introduced to make training as a specialist physician more structured. Breen thoroughly reviews this period which should be of interest to younger colleagues.

What of the title – Humanity in Medicine?

Stan Goulston was not the first to decry the dangers of “scientific” medicine eroding the “humane” side of medical practice and he will not be the last. William Osler strongly encouraged students and practitioners of his era to read widely and even suggested a bedside reading list.

In the face of an ever-expanding medical curriculum, there is a difficulty in doing something about this at a formal level. That Stan worked in his retirement to demonstrate successfully the potential of some form of formal instruction in humanities is probably his most lasting memorial.

Chapter 12 – Poet, Teacher of Medical Humanities and Lover of Nature – is a testament to Stan’s skill as a wordsmith and the poems selected provide a stimulus to seek out his 2007 book of poems Poetry for Pleasure.

During their undergraduate and early postgraduate years, students are exposed to a variety of medical influences. One senior colleague can often become a role model exerting a subtle and not always apparent guidance along a particular clinical path. Stan Goulston has been a role model for many physicians and a reading of this life would suggest he will remain so for the future.

After reading this book, I am still wondering about the source(s) of Stan Goulston’s thorough “goodness”. Proverbs 22.v.6 states: “Train up a child in the way he should go, and even when he is old he will not depart from it.” I suspect Stan’s character was shaped by his deeply ingrained Jewish faith, the character of his father and father-in-law, the loss of a mother he never knew, an acute observation of inter-family relationships and a respectful obedience to authority. I wonder if Kerry Breen would agree. 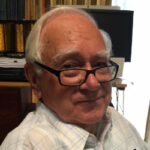 Michael Pain is a Professorial Fellow of the University of Melbourne and retired in 2001 after 21 years as Director of Thoracic Medicine at the Royal Melbourne Hospital. He is a former Censor and Councillor of the Royal Australasian College of Physicians.