The not so great debate 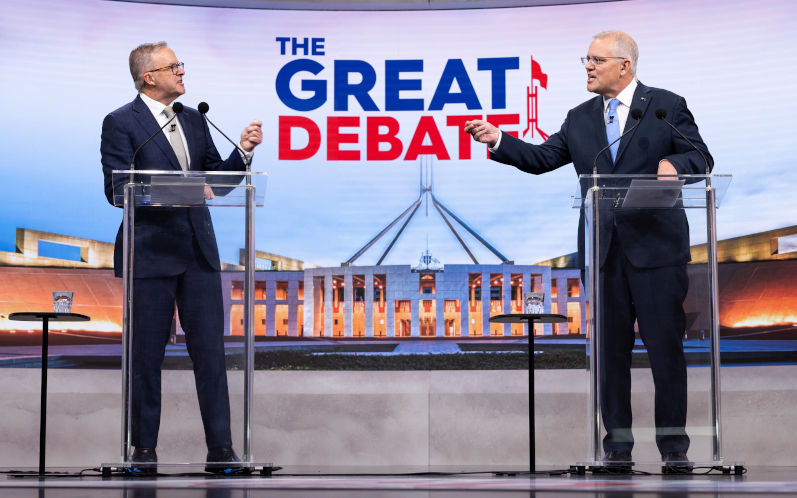 The ‘debate’ was reduced to an ugly exchange of slurs, slogans, ridiculous claims and counter claims. Image: AAP/Alex Ellinghausen

There’s a scene in Fawlty Towers where Basil is so terrified of the anticipated reaction of his partner, Sybil, that he goes into a full-blown meltdown. “Mr Fawlty, don’t panic”, Polly the waitress intones. “What else is there to do?” Basil screams back. I know how he feels.

Today, I allowed myself to slip into a temporary state of despondency. Actually, it’s been lurking since the start of the federal election campaign, if not well before. Even by recent standards of gotcha idiocy this campaign is a doozy.

So disconnected have the leading parties become from today’s global crises that we seem to have entered a vortex of hyper reality. Sure, the independents and Australian Greens offer a chink of light in the darkness, but the dominant political narrative remains wedded to sectional self-interest and planetary destruction.

Even on those rare occasions of intellectual clarity, arguments are conveyed through the prism of right-wing ideology, which is hardly surprising given the nature of today’s body politic. The fact is that political discourse in this country, as elsewhere, has shifted so far to the pollical right that even the most anodyne ‘reforms’ are regarded as tantamount to gulag-style socialism. Who would dare question the orthodoxies of ‘economic growth’, ‘high productivity’ or the almighty ‘free market’? It’d be a recipe for political suicide. What’s clear is that over the past 40 years or so, political discourse has been dragged into an ideological quagmire. Mention socialism or social justice and all hell breaks loose. Raise alternative ways of being and you’re instantly sidelined. The only talk allowed in the tent is the usual hegemonic banality.

It’s been this way for a while, ever since Francis Fukuyama in the early 90s announced the “end of history” and Margaret Thatcher insisted that “there is no alternative” to free market economics. As Britain’s latter-day Boudicca, Thatcher famously boasted that her ultimate triumph after 11 years as Tory leader was to shift the Labour party towards the ideological right. It was Tony Blair’s ‘New Labour’ that duly obliged with a slurry of Thatcherite policies.

Today, the situation facing millions of Australians – already among the most heavily indebted in the western world – is set to get worse, chiefly as a result of rising inflation and interest rates. For the three million people in poverty the situation is dire, with housing affordability a national super-crisis – especially for those on welfare, for whom only around one percent of the rental properties are affordable.

And yet, instead of seeing real leadership on such matters, we’re offered the charade of Sunday’s so-called “great debate” on Channel Nine. If nothing else, this grotesque farce demonstrated the depths to which mainstream political culture in Australia has sunk. Afforded a prime-time spot usually reserved for 60 Minutes, the debate was promoted as if it were kick boxing. Three journalists linked to Channel 9, including the Chris Ullman, David Crowe and radio host Deborah Knight came armed with a grab-bag of gotcha-type questions, clearly designed to unsettle the hapless debaters.

What eventuated was an embarrassing free-for-all, with both Albanese and Morrison shouting at and over each other while the host looked on, aghast but pleased. The whole thing was designed for just this sort of spectacle. After all, it makes for good television. With one minute allocated for answers and few rules in place, the contenders simply let fly.

The ‘debate’ was reduced to an ugly exchange of slurs, slogans, ridiculous claims and counter claims. As one viewer noted, this Pythonesque charade had all the gravitas of the mad hatter’s tea party. How sad, how pathetic, how utterly irrelevant to the crises we face. This was party politics at its most puerile and redundant. Instead of considered, genuine debate, or the venting of clear ideas, visions and possibilities, we got mudslinging. And yet, as a friend who recently alerted me to a book called Triumph of the Airheads, noted, “what on earth did you expect?”. She had a point.

Meanwhile, here we all are in a world in which liberal democracies are on the slide and autocratic regimes on the march. Corporate power has never been stronger. Christian fascism, ethno-nationalism and populist conservatism are on the ascendent, and should Donald Trump return to office in the US, as expected, then we’re into a whole new ballgame.

As English commentator Paul Mason, points out in How to Stop Fascism, far-right tendencies are evident everywhere: from the radicalism generated by ‘’anti-globalism’ through to assaults on ‘woke culture’, ‘political correctness’ and organised political protest. La Pen’s increased standing in France should, in and of itself, offer a dire warning about where politics is heading, and not only across continental Europe. Sure, there are signs of the opposite in some Scandinavian countries and across South America. Overall though, we’re are careering toward an increasingly divided world just at a time when united global action is so urgently needed on the climate emergency, economic inequality and the nuclear threat.

We’re close to midnight on the Doomsday clock, but still the free-to-air TV networks in Australia indulge us in infotainment wars. It’s sad, and scary.