RICHARD TANTER. An Australian pathway through Pine Gap to the nuclear ban treaty

The Pine Gap Relay Ground Station could be closed, with appropriate notice of intent, without genuine disadvantage to US national security.  This would provide a technically and strategically feasible pathway past the most important obstacle posed by Pine Gap to Australia becoming compliant with the Treaty on the Prohibition of Nuclear Weapons(TPNW).

Having failed to prevent the adoption of the nuclear ban by 122-1 at the United Nations in July 2017, the Australian government has shifted ground on its opposition to the treaty as it moves towards entry into force. In a remarkable display of arrogance and intellectual over-reach the government now asserts that, even if Australia wanted to join the Treaty on the Prohibition of Nuclear Weapons is simply incompatible with the continuation of the U.S. alliance. We are, the government says, already in too deep to pull out.

On May 31st, 2018, Richard Sadlier, a DFAT assistant secretary told a Senate estimates hearing that joining the treaty would be ‘impossible’, because the nuclear elements of activities at the ‘joint facilities’ are now too densely interwoven with the non-nuclear elements that they cannot be separated.

The joint facilities – a.k.a. Australia-located elements of the U.S. globally distributed systems of nuclear command, control and intelligence – are, Sadlier, argued, made up of ‘many separate interlocking structures, understandings, agreements and joint activities and facilities’ that are ‘incompatible’ with the treaty’, and that it is ‘impossible, not practical, for Australia to restrict roles under the alliance to non-nuclear missions.’

Sadlier did not feel a need to burden senators with any factual details about the undoubtedly complex situation at Pine Gap, North West Cape, or the numerous other ADF bases to which U.S. forces have access and which may have some activities that support U.S. nuclear planning and operations. No doubt, half a century of Australian nuclear cooperation with the United States will make analyzing and weighing the significance of the full range of nuclear-related activities at Australian bases a major research task. And as with many international treaties, lawyers are going to argue about ‘how much assistance is too much’ under the TPNW.

Pine Gap is a US-constructed and US–paid-for intelligence facility outside Alice Springs operated by the US National Reconnaissance Office. More than 800 Australians and US men and women staff the facility, including units from all four branches of the US military.

A careful examination of precisely what Pine Gap does shows there is a viable pathway in the most important of its nuclear-related activities for Australia to become compliant with the TPNW without necessarily disrupting its alliance with the United States.

The US has for some time built technological alternatives to relying solely on Pine Gap for its most important nuclear-related operations.

Pine Gap’s multiple and complex intelligence activities can be very roughly characterised as providing ‘big ears’ and ‘big infrared eyes’. There are three distinct major space-related surveillance systems installed at Pine Gap, one of which has a critical role in US nuclear command, control and intelligence. 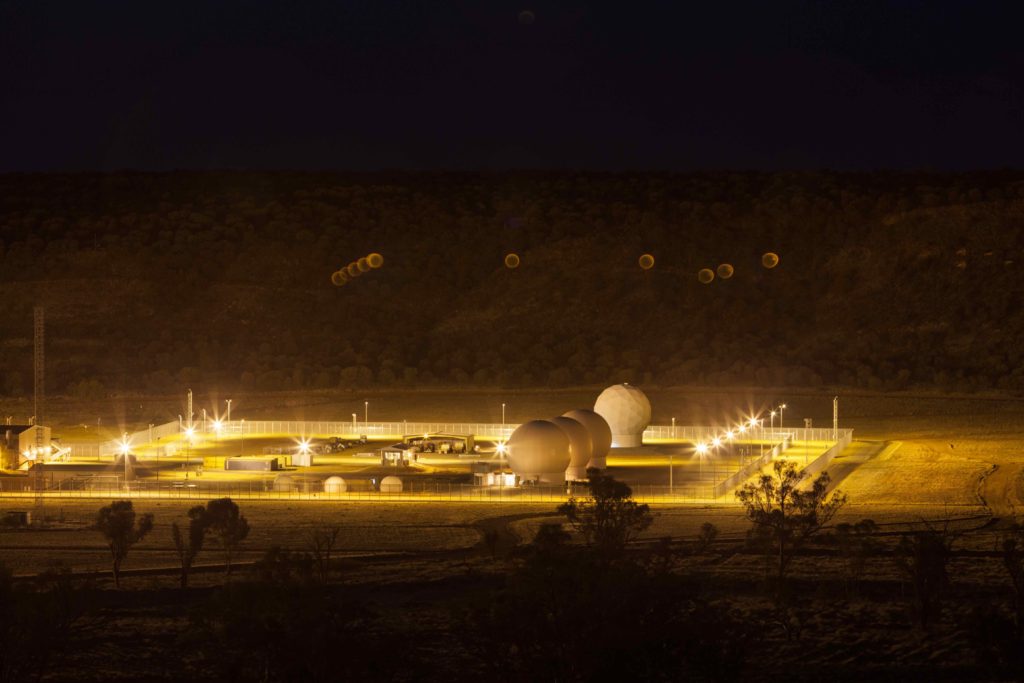 This is the Relay Ground Station (RGS) in Pine Gap’s western compound. The four main antennas of the RGS provide linkage to US early warning satellites which are together known in US military jargon as Overhead Persistent Infra-Red or OPIR, consisting of older Defense Support Program (DSP) satellites and the successor Space-Based Infra Red System (SBIRS) satellites. The infrared OPIR sensors detect the heat bloom of intercontinental and submarine-launched nuclear ballistic missiles launched against the US. Data from these sensors is downlinked to Pine Gap and sent automatically in real time to the system’s Mission Control Station at Buckley Air Force Base (AFB) in Colorado, US Strategic Command and the White House, as early warning of nuclear attack.

Each of these two functions of the Relay Ground Station – early warning, and missile defence – might be seen as defensive, and therefore stabilising. However, such a claim is misleading. Missile defence, when it is possessed by only one of two nuclear-armed enemies, is anything but defensive and stabilising. China correctly points out that US–Japanese missile defence, should it work as advertised, promises to make China’s ‘minimum means of retaliation’ deterrence force vulnerable to an attack by America’s 6000 or so nuclear weapons. This has led China to modernise its current 250 to 300 nuclear weapons in a classic action-reaction armament cycle.

To comply with the TPNW, an Australian government would have to provide assurances that the Relay Ground Station’s OPIR systems could not and would not be used for nuclear planning or operations. The politically critical question is how this could be achieved without threatening US national security interests.

One approach to compliance could be for the Australian government to request, and the United States to accept, verifiable binding legal, organisational and technical limits on specific categories of the operations of the RGS – i.e. separating the defensive functions from nuclear war-fighting. Achieving agreement to such verification from the United States would be very difficult at any time, and highly implausible at present.

An alternative approach would be for an Australian government to require the closure of the Relay Ground Station and the removal of its systems from Pine Gap, leaving the rest of the base and its principal signals intelligence functions – and acknowledged US national security concerns – unaffected. This could occur over an agreed period of time – say, for argument’s sake, five years.

This is technically and strategically achievable without closing Pine Gap as a whole, and without throwing the alliance into crisis, for two good reasons.

Firstly, the OPIR Relay Ground Station is quite different in physical, personnel and technological character from the much larger signals intelligence part of the facility. The RGS is physically small and distinct, and is operated automatically and remotely by the Mission Control Station at Buckley AFB in Colorado. There are only a very small number of staff on site at the RGS – essentially for maintenance. Pine Gap does not process or retain any of the data downlinked from the satellites – it flows automatically to Buckley AFB by optical fibre and satellite communication.

Secondly, for decades the US has been acutely aware of the physical vulnerability of critical nuclear command and control facilities like Pine Gap to enemy attack, and has therefore built technological redundancy into the OPIR system. All of Pine Gap’s OPIR satellites have satellite-satellite crosslinks and communications links to US relay satellites. These enable the crucial warning data to be transmitted from one to another and then downlinked to the Mission Control Station on US soil without ever relying on the Pine Gap RGS.

In addition, US OPIR satellites themselves can and do downlink directly to dispersed mobile ground terminals in the US, as well as to US combat commands in around the world, such as South Korea. The RGS at Pine Gap – which is highly vulnerable to attack – provides redundant backup to both the cross-links and the mobile stations systems but is not in itself essential to the OPIR system’s survival.

By deterring a surprise first strike, reliable early warning of nuclear attack is a key element of nuclear deterrence. Even with the RGS closed, all the data critical for US early warning would still flow from the OPIR satellites to the Mission Control Station.

The Pine Gap Relay Ground Station could be closed, with appropriate notice of intent, without genuine disadvantage to US national security.  This would provide a technically and strategically feasible pathway past the most important obstacle posed by Pine Gap to Australia becoming compliant with the TPNW.

Of course, there are other activities both at Pine Gap (‘big ears’ or signals intelligence) and at other bases that do or could assist US nuclear weapons use. Some of these may turn out to be more obdurate to reform, and pose more difficult political decisions.

Yet while further research into the full range of these potentially prohibited activities is necessary, the RGS constitutes the principal and most direct form of assistance to US nuclear war fighting. An Australian government that was acting in good faith would be taking a huge step towards compliance with the prohibition on assistance to fighting a nuclear war by giving notice the US that the RGS is to be closed.

The government’s claim that Australian assistance to US nuclear weapons planning and operations is inseparable from non-nuclear alliance cooperation is incorrect, disingenuous, and arrogant in this most important and egregious case.

* Richard Tanter is a Senior Research Associate at the Nautilus Institute and teaches the University of Melbourne. He is a former president of ICAN Australia. A footnoted version is available here. <http://nautilus.org/network/associates/richard-tanter/publications/. A shorter and edited version of this article appears in Choosing Humanity: Why Australia must join the Treaty on the Prohibition of Nuclear Weapons, ICAN Australia, July 2019, pp. 22-24.