With Valentine’s Day, 14 February, not far off, I was starting to think about…….then it struck me!

This Valentine’s Day, Prime Minister Morrison has special reason to celebrate: his 538th day as leader of the Liberal Party.

Say what? You didn’t know?

Well, after 538 days, he will have been leader of his party for half the time his predecessor Malcolm Turnbull was in the job: 1075 days (well, that was Malcolm’s “second coming”; he notched up only 441 days the first time around).

Yes, Scotty has already eclipsed Malcolm’s earlier innings, and that of Malcolm’s predecessor, Brendan Nelson, who lasted only 292 days before he fell on Malcolm’s sword.

It probably says something about the Liberal Party that among the five leaders (counting Turnbull twice) they’ve had since John Howard lost his seat in Parliament in 2007, the one who survived longest was Tony Abbott (an astonishing 2,113 days), who then lost his seat in 2019.

Howard joined Stanley Bruce (1929) as the only incumbent PM to be tossed out by his own electorate (Malcolm tossed Tony out of being PM before the voters had the chance). Stanley Bruce was rewarded for his pioneering distinction with a seat in the House of Lords, becoming Viscount Bruce of Melbourne. Both Howard and Abbott are devoted Monarchists, like Bruce. No doubt Abbott awaits a “lordship” in return for his “captain’s call” in making Prince Philip a Knight of the Order of Australia. “The Lord Warden of Warringah”, perhaps. Howard awaits his for so cunningly befuddling the 1999 referendum on Australia becoming a republic that we still have a head of state in London who was happy to dismiss our elected government back in 1975. Thank you, “The Baron of Bennelong”.

With another 538 days to go, after 14 February, before our PM eclipses his predecessor’s term as leader of the Liberals, we can only ponder the odds of him making it. Of course, Scotty is a monarchist, as well. Does that mean he might lose his seat (Cook) at the next election, like Bruce and Howard? Must we wait that long? “The Count of Cook” has a ring to it, though, as long as you say it carefully.

In his victory speech on election night last May the PM said “I’ve always believed in miracles.” We can hope, I guess. Cook hasn’t been won by the ALP too often (last time was 1972) but you never know.

Just as Howard connived his way through the 1999 referendum, Slomo pulled a swifty, it seems, in winning the Liberal Party’s preselection for Cook, back in 2007. The ballot had been won, originally, by a bloke called Michael Towke but he was subjected, immediately, to a smear campaign; later – too late for Towke – proven to be baseless. And guess who bobbed up with the prize? With just eight votes to Towke’s 80 in the first preselection ballot, Scotty became the candidate for Cook.

Much has been said about how little has been disclosed about how Morrison lost his job as head of Tourism Australia, before he became the MP for Cook. Miraculously, even less is said about the fact that before he was head of Tourism Australia, he was…head of Tourism in New Zealand! And he finished that job, too, in controversial circumstances. Scotty from Marketing left both the Australian and NZ tourism roles less than two years into his contract. In fact, come May this year, he’ll have lasted longer as PM than he ever did as a public servant, either side of the ditch.

When you trawl through the pre-parliamentary careers of Morrison’s predecessors (all but Howard deposed by their parliamentary colleagues) there’s not much that’s “questionable”. Howard: boring. Nelson: nothing much to see there. Abbott: a bit of bad form (suggestions of throwing his weight around, including against women) at Uni, and whatever incident it was that caused his subsequent unfortunate/unnecessary owning up to being father to an ABC sound recordist, who turned out not to be his kid (when the non-paternity was established the bloke apparently said he’d never been so relieved in his life).

Turnbull: evidently begging to be admitted to the Labor Party but, aside from that, just doing his job as a lawyer, protecting the Packers.

Australians have a delightful talent for giving nicknames to tall poppies. No PM has attracted more than Morrison, few of them complimentary: SloMo, ScumMo, SnowMo. And no PM has more unexplained stories in their background.

The question becomes: will the Labor Party and the media dispatch him before his own party wakes up to him? Maybe a Valentine’s Day Massacre? Come to think of it, that happened the same year Stanley Bruce lost his seat.

Of course, Valentine’s Day is also the anniversary of the 14 February 1779 death of James Cook, the PM’s favourite explorer, after whom his electorate is named. Propitious, if a little gruesome, given the manner of Jimmy Cook’s demise in Hawaii (also regarded as the crucible of Morrison’s demise – holidaying there while Australia burned).

Well, if all that’s a bit of a stretch, there’s always the Ides of March, a month and a day after Valentine’s. Caesar had crossed the Rubicon, bearing arms, to knock off his predecessor before, himself, suffering 1,000 cuts (20, actually) a few years later, on 15 March, dispatching him from the top job in Rome. Who will cross Lake Burley Griffin, with two mobile phones turned on, and an opinion poll in their pocket?

Richard Whitington was a member of Gough Whitlam’s staff from 1974 to 1977. After a subsequent career in advertising, corporate communications and executive recruitment he retired in 2019 to do some freelance writing. Website: richardwhitington.com 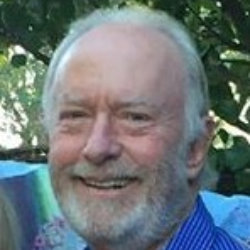 Richard Whitington was a member of Gough Whitlam’s staff from 1974 to 1977. He’d been a journalist, briefly, and a political publicist, later spending 25 years in marketing and corporate communications, initially with the ALP’s advertising agency in the late 70s and early 80s. He finished his career with 20 years in executive recruitment and retired in 2019 to do some freelance writing. Website: richardwhitington.com