Right-wing protesters in Canberra lit a fire under democracy, but did we care? 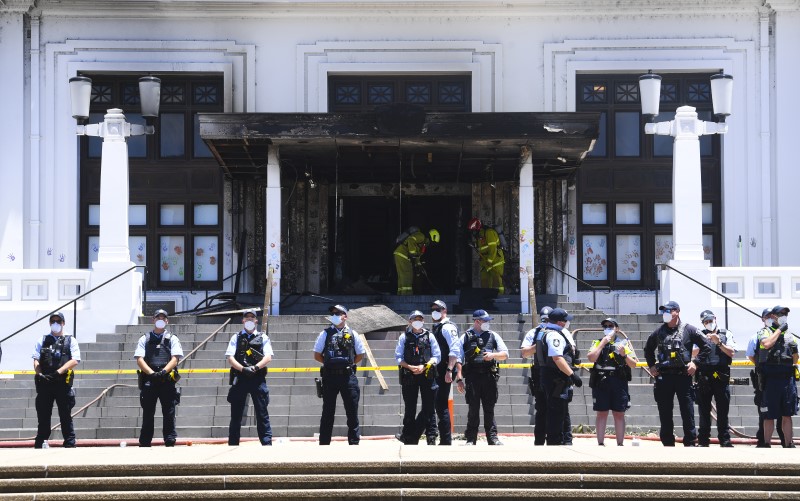 The torching of the doors of the old Parliament House and now Museum of Australian Democracy on the second last day of 2021 has passed with surprisingly little commentary. It was clearly much more than an act of random vandalism. The motivation was emphatically political. The target was chosen because while the new parliament building was closely guarded and out of reach the old building had great symbolic resonance because it had been the focal point of national government for 60 years. In conversation with members of the media in the days after the event supporters at the site declared that ‘their intention was to take, to storm parliament house … by force if necessary’ even if it meant sacrificing their lives ‘for the cause.’ The rhetoric may have been an amalgam of hyperbole and bravado but it should be taken seriously.

Its provenance is easy to determine. The planned raid was clearly inspired by the attack on the Capitol Building in Washington the previous January. The ideas are also drawn from American right-wing sources, specifically the sovereign citizen movement which combines a tangle of ideas which are inimitably American. They lose much of their relevance in the transition to Australia but they are certainly mischievous and dangerous. The FBI has designated elements of the sovereign citizen movement as domestic terrorists representing a higher risk to society than either Islamic extremists or right-wing militias.

It is entirely appropriate to ask how ASIO with its massively enhanced funding and capacity allowed them to slip under the radar and wreak permanent damage on one of our great heritage buildings. Does ASIO really take domestic right-wing terrorism seriously or is it all just window dressing? And it is surely apposite to speculate what the reaction would have been if the arsonists had been Muslim with even the most tenuous links with Isis or al-Qaeda or even none at all?

Presumably there would have been charges under the terrorism statutes, raids on houses of friends and relatives and confiscation of property with the tipped off media on hand to show the Federal Police dragging suspects into captivity. The matter would not have been treated as a misdemeanour and heard by a magistrate who immediately granted the perpetrators bail.

But two larger interrelated questions present themselves. The threat of foreign influence has overshadowed public debate in recent years and has led to the passage of legislation to counter it. The accompanying rhetoric notwithstanding almost the entire focus has been on the purported threat of Chinese subversion leading to ASIO witch-hunts which culminated in the raid on the residence of NSW upper house ALP politician Shaoquett Moselmane in June 2020. It was large, day-long and histrionic, fully covered by a media scrum which had clearly been tipped off in advance. To date nothing has been publicly presented which could provide retrospective justification for such a threatening heavy-handed operation.

In both Australia and overseas a related concern is a perceived threat to democracy presented by authoritarian states notably China. But this is little more than alarmist propaganda. China has little capacity to endanger our institutions short of invasion and conquest. America presents a far more compelling threat. It is not the Chinese Communist Party we have to fear but the US Republican Party still dominated by Donald Trump’s supporters who, in their millions,  continue their refusal to accept the mandate won by Joe Biden in 2020. There is now widespread consensus that the midterm congressional elections in November and above all the presidential poll in 2024 will bring greater turbulence than at any time since the build-up to the Civil War in the middle of the 19th century.

The channels through which American influence flows into Australian public life are wide and deep. The media dominance of Rupert Murdoch’s News Limited is impossible to ignore given the central role played by Fox News in the rise of right-wing militancy. The Liberal Party has long maintained close fraternal relations with the Republican Party. There has been no indication that anything has changed despite the emergence and ascent of Trump.

Neither of our major parties has expressed any public concern about what is now the well documented and carefully considered assaults by Republican state governments on every aspect of the ramshackle electoral system. This should alarm anyone with a genuine interest in the worldwide future of democracy. And yet the federal government still trots out its shibboleth that our close dependent relationship with the United States is based on shared values. All the evidence suggests they are still deeply committed to going all the way with the USA.

Where does this leave our much touted concern about foreign threats to our sovereignty? The inescapable question is the status of the USA. Is it a foreign country or not? Either way our relationship makes it clear to outside observers that Australia has no real desire to assume the full responsibilities and challenges of an autonomous nation state.