ROBBIE GRAMER and COLUM LYNCH.Trump Seeks to Halve U.S. Funding for WHO as Coronavirus Rages(Brookings Report 10.2.2020)

The president’s new budget would cut more than $3 billion in global health programs. 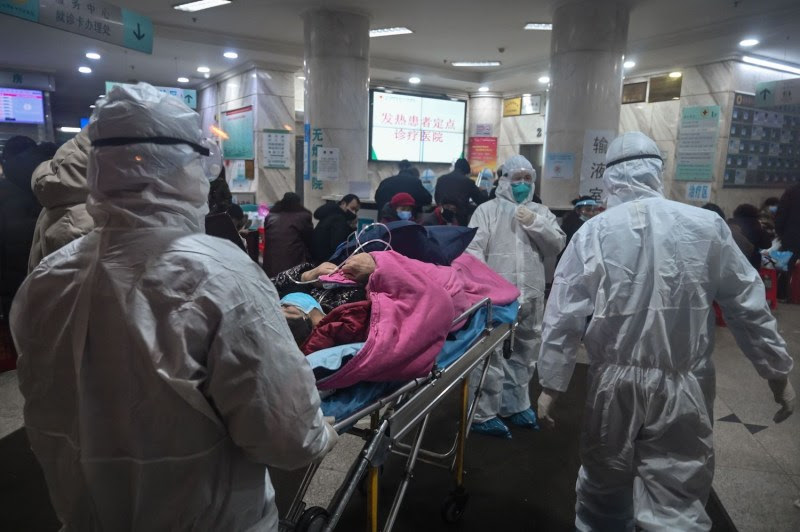 Medical staff arrive with a patient at the Wuhan Red Cross Hospital in Wuhan, China, on Jan. 25. HECTOR RETAMAL/AFP VIA GETTY IMAGES

The Trump administration is eyeing steep cuts to global health funds in its 2021 budget proposal, slashing more than $3 billion in overall programs, including half of its annual funding to the World Health Organization (WHO), which is leading the fight against the deadly coronavirus outbreak.

Lawmakers from the House and Senate appropriations committees pressed officials from the State Department and U.S. Agency for International Development (USAID) at a briefing on Feb. 7 previewing the budget to explain why it made sense to scale back spending at a time when the world is facing the threat of a deadly virus in China that has spread in limited numbers to other countries around the world, according to congressional aides familiar with the matter.

The cuts are part of a broader proposal by the Trump administration to cut more than 21 percent from the federal budget for foreign aid, proposing $44 billion for 2021 from the $55 billion Congress enacted in 2020.

Top lawmakers quickly slapped down the budget proposal, indicating Congress could reject the Trump administration’s proposed cuts to foreign aid and the State Department as it has in years past on a bipartisan basis. “Like the President’s previous budgets, this year’s request is a waste of the paper it’s printed on,” Democratic Rep. Eliot Engel, the chairman of the House Foreign Affairs Committee, said in a statement. “Proposing such reckless cuts to our critical foreign policy tools isn’t a serious proposal.”

Senior administration officials said they were allocating new resources, including an additional $15 million for the USAID Global Health Security Program, to fight the coronavirus, as government officials worked around the clock to evacuate American citizens from the region of China hit by the deadly outbreak. The budget proposal also includes a request for $25 million for a so-called Emergency Reserve Fund, which, according to a State Department spokesperson, “can be quickly deployed to respond to pandemic outbreaks.”

“The budget protects against infectious disease threats at home and abroad, by bolstering country capacity to prevent, detect, and respond to outbreaks and to prevent epidemics from reaching our borders,” Deputy Secretary of State Stephen Biegun told reporters at a briefing on Monday. “It also allows us to provide the necessary flexibility to respond to emerging global health threats, such as the novel coronavirus and Ebola.”

“Our ability to successfully evacuate Americans was due to the incredible men and women of the State Department and the resources provided by this budget,” he said.

But experts and some on Capitol Hill say a small increase in funds doesn’t outweigh the steep proposed cuts to global health programs overall.

“I’m pleased that the budget request has a small boost to USAID’s global health security account—but adding $15 million more to this account, while cutting more than $3 billion in overall global health programs, is not the answer for pandemic preparedness,” Liz Schrayer, the president and CEO of the nonprofit organization U.S. Global Leadership Coalition, told Foreign Policy in an email. “If there is anything the coronavirus reminds us, it’s that a global threat anywhere is a global threat everywhere.”

“We’ve been down this road before,” said one Senate aide, noting that the White House has been trying unsuccessfully for three years to impose steep cuts in global health programs that Congress supports. “They don’t seem to learn anything.”

The aide, who spoke on condition of anonymity, said officials from the State Department and USAID were asked at the briefing to explain how they could, on the one hand, say their budget “asserts moral leadership through global health and humanitarian assistance” when in reality it cuts funding for both. The response, the aide said, was “essentially silence. There was no substantive explanation, but everyone knows they are simply carrying out the orders of the White House.”

“We said, ‘Of all things to be doing in the midst of a global pandemic, you’re cutting funds for global health,’” the aide added. “Their response was: ‘We did what we could with the funds we were told we could spend.’”

The State Department spokesperson defended the administration’s response to global health, saying that State and USAID programs “are enhanced by other agencies’ pandemic preparedness and response-related efforts. Our programs build the capacity of countries to prevent, detect, and respond to emerging pandemic threats such as the coronavirus.”

“The U.S. is a proud leader in global health assistance, but we do look to other donors to contribute more,” the spokesperson added. “The $290 million requested for Gavi, the Vaccine Alliance, advances these burden-sharing goals while continuing to advance U.S. leadership on a cost-effective, proven health intervention.”

Congress authorized nearly $123 million in funding for fiscal year 2020 to the Geneva-based WHO, which is coordinating the international response to the coronavirus outbreak. The Trump administration proposed that the U.S. commitment to WHO be reduced to just under $58 million for fiscal year 2021. The budget proposal also calls for slashing more than $3 billion from the more than $9 billion Congress approved for global health programs managed by the State Department and USAID.

“This is precisely the wrong time to be cutting funds to the World Health Organization, which is on the front lines of tackling the coronavirus epidemic and trying to keep it from spreading wildly to other countries,” Peter Yeo, the president of the Better World Campaign, told Foreign Policy, who expects the proposed cuts to be rejected by Congress. “It is out of synch with the front-line realities of our foreign policy and national security.”

The administration’s budget also includes steep cuts to fighting some of the world’s deadliest diseases. It proposes a 58 percent cut to the Global Fund to Fight AIDS, Tuberculosis and Malaria, down to $658 million from $1.56 billion allocated in 2020.

The administration proposed full funding for a program that immunizes children in the world’s poorest countries, committing $1.16 billion over four years to the program, officially called Gavi, the Vaccine Alliance.

The Trump administration’s proposed cuts to the State Department and foreign aid budget would hit the United Nations and other international organizations particularly hard, shaving off nearly a third, or more than $500 million, of the almost $1.5 billion Congress enacted in 2020. It proposes a nearly $200 million cut in mandatory U.S. contributions to the U.N.’s administrative budget, as well as millions of dollars in additional cuts to international agencies that regulate international mail and telecommunications services, track global warming, fight cancer, and seek to contain the use of chemical weapons. U.S. contributions to NATO would fall from more than $61 million to about $54 million, while $73 million in funding to the Organization for Economic Cooperation and Development would be eliminated.